Not the easiest album to listen to in the world, then again most of the time, really great music creeps in your coconsciousness gradually as it will with “Ghost Republic” which, is the first album from Willard Grant Conspiracy since “Paper Covers Stone” in 2009 and the first album of entirely new music since “Pilgrim Road” the year before.

The album was written and recorded in by the remaining two core members of the collective, David Michael Curry and Robert Fisher otherwise known as Willard Grant Conspiracy.

Curry is the band’s viola player and on this record a viola that takes on many parts, mainly different guises of sorrow. Robert's vocals on the album, at times almost Lou Reed like, are the perfect baritone pitch so, instrument and voice combine to great effect.

The high desert, Robert’s home in since 2006 is the backbone, the soul of this album; Fisher tells of the origins of the album;

“First there is living in the high desert. . Quartz Hill. Littlerock. Pearblossom. A far flung corner of the . A place for the forgotten and for those the rest of the city wishes to forget. Land of the Joshua Trees. Land of the Rattlesnakes. The Mojave Green. An Outpost. The Devil’s Punchbowl. An inhospitable place that men have forced themselves upon in an uneasy truce between cheap land and great ambition.  This land still has teeth and venom. The Border. Heading east, the next stop is Mojave, Death Valley or the where towns have names like Lone Pine and . And the road negotiates with places like Convict Creek and . A road less travelled.”

The ghost town of the album is high in the Sierras, a town called Bodie. A closed and, abandoned mining town. The town is the subject of a hallucinatory group of collaborative poems written by a loose confederation of poets for a book conceived and organized by the based poet and artist Nicelle Davis.

Robert Fisher was asked to add a character to the book and long story, short, this resulted in the album which, will be released by Loose Music on 03 September. 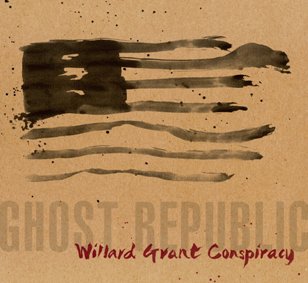 Ghost Republic will also be available as book, which is being is being published by Ampersand and the film of will be available for viewing via your favourite media sites shortly. A Vimeo video is HERE