“I heard someone say that they found a new ideology through the record. That's what it's all about to me.”

This week one of the best albums of the year, ‘Comfort Songs’ by Cloud, was released.  We caught up with the man behind it, Tyler Taormina, to ask him some questions, and also spoke to label owner Jamie Halliday to find out how he came to put the record out. First up was Tyler:

Hi Tyler – where in the world are you and how are you doing?

Right now I'm sitting in my backyard on Long Island in the house I grew up in. I'll be here for about 3 more weeks before my big move to Los Angeles where I'll pursue my career in writing for TV. I'm doing pretty well. There isn't too much to complain about but just graduating college can be tolling in a lot of ways.

Is the "Comfort Songs" record solely your vision, or was it shaped and influenced by the people who played on it with you?

I guess it's mostly a vision but it'd be hard to say that without giving the credit to friends who came up with parts that made me reconsider how the song should be. For instance, my friend Jon Davies, who I'm in a drone band with called Fjords, was the one to suggest, "this should be slower.... I mean... real slow" while practicing Authorless Novel in Boston.

There’s a sort of hymn-like vibe to a couple of songs, not to mention the musical hints of ‘Ave Maria’ and ‘Amazing Grace’ on ‘Stomach Pit’. Did you have what you’d call a ‘religious’ upbringing and if so is this something that still has an influence in your life?

I do. I was raised catholic and attended a Youth Group all throughout High School even when I fell out of touch with my religion. I'm mostly a nostalgic person and church being in my childhood so prevalently plays such a key role of the past-- especially with its connotations to purity. Also, I love thinking of my songs as ones that people have been singing all throughout time.

You’ve said that when you were recording this you were working at the Sheraton Hotel & driving around in your Grandma’s ’88 Cadillac Coup DeVille, which only played cassettes. What music were you listening to in the car?

Well I mostly have drone & noise cassettes but I don't prefer listening to them while driving. My favourites were friend's tapes -- Infinity Girl's Stop Being On My Side, For Serious This Time's When You're In It, and Giant Peach's People Don't Believe Me. So great.

The manifesto and rules for ‘Desperation Club’ seem very clear – did you actually set this up as a real club when you were a teenager, and if so were there any members other than yourself?

I guess I'm a bit embarrassed about having written that but it still remains important. One time a friends said to me "maybe some people just can't care as much" and it got me thinking to all of us that did. I went through a major suffering period when writing this album and I felt such a connection to all of the people who I knew I could relate to. At the time I've felt that some of us have so much weight to carry and I felt that we were in some secret society or something like that. No one has ever actually claimed to be "in it," I wrote it for people to feel a sense of brotherhood in this world when they need it. I think it's important to say that I feel much differently about suffering as a whole at this point in time.

What is your favourite track on the album, and why?

I don't have a favourite but there is a clear least favourite to me. I won't mention it because it might warp someone's perception. My favourite part of the album is when the first notes of Authorless Novel come in like a punch in the face.

What 3 things would you say had the most influence on the record?

Hm. Lots of ways to interpret this one.  I'd say Pain, Ego, and Nostalgia.

It seems to me that one of themes of this record is that life isn’t so bad, that sometimes shit happens and we just need to find the strength in ourselves and our friends and family to get through it. Is this a frame of mind you were in before you made the record, or was there a cathartic or therapeutic element to making the record that helped you get to that place?

This record was certainly therapeutic to make, it certainly comes from the support of finding strength in friends and family, but I'd say it's mostly a giant realization. I felt like I caught myself red handed through the guise of jealous love. It's a lot of figuring out what was actually going on when you say "love you" then "fuck you" so quickly.

What is the best, and/or worst, thing that someone could write in a review of ‘Comfort Songs’?

I heard someone say that they found a new ideology through the record. That's what it's all about to me. Also when people say they find comfort in it. The worst... I don't know, that it's "whining for whining's sake?"

Have you got any plans to tour the record, and do they include bringing it to the UK?

Well actually I am moving to LA via car from NY. So I am trying to make my road trip into a bit of a tour. I've 9 stops planned out along the way.  Unfortunately no UK. That'd be so amazing.

This is your debut label release as Cloud – what are your favourite debut albums by other artists?

What's next for you - more Cloud recordings or have you got other plans?

I've been recording the next one entitled Zen Summer. It's a world of difference from Comfort Songs primarily because I was on the polar opposite end of the spectrum after feeling so down. I'm excited to release it whenever that may be and then I'm off to LA where I'll switch gears back into screenwriting. I hope to someday create my own kid's TV show. 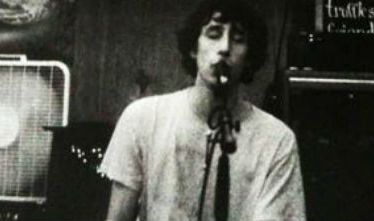 And now some questions for Jamie, the man behind the Audio Antihero label:

How and when did you first hear Tyler’s music?

I was first introduced to Cloud's music towards the end of last year when a lovely guy called Brendan from Boston interviewed myself and Ben Parker of Nosferatu D2 for PRI's 'The World' in North America. Brendan stayed in touch with me and sent me an amazing EP he'd recorded under the name Marblemouth. The EP as it turned out was produced by Cloud and I loved it so much that he put me onto Cloud as well and that was the beginning of that. I have never had a single solitary good anecdote about the way in which I've met any artist on the Audio Antihero roster and Cloud is no exception...but at least this one verges on making me sound like a big-shot.

Did you immediately think that you wanted to put it out on your label? Did you have to convince Tyler or did he have to persuade you?

Honestly, not exactly. I liked it immediately and he quickly was on my "I must get those guys on a compilation some time" list but the world moves so fast now and my brain moves so slowly that I don't always get a chance to listen to music with the intensity it requires, so unless something is presented to me as "this could be on your label" then I often won't even think to think about it, plus A&R pretty much gives me panic attacks...then on one long commute home I put it on by chance and soaked it up from start to finish and it clicked and I realised just how perfect it was. By "Halley's Comet" I was pretty much beside myself. A couple of days later I "made the call." and as far "convincing" is concerned - Tyler is a very trusting person, I told him I meant him well and he believed me. That was pretty much that.

How do you think it fits with the other artists on your rota and the feel of your label as a whole?

We've never had much of a cohesive roster, which suits me just fine. I've been told it's the wrong approach, that you can't build up a label following when your records aren't alike...but I can't imagine the appeal in being intentionally safe when a label like this can only exist as a crime of passion..."Quick! Do something dull and predictable or you'll lose the crowd!" - but yes, I think Cloud fits in well. It's music from the soul that I believe would stands out as strong and unique, he's a lot cheerier than the rest the roster but I don't hold that against him. It's a real honour for me to be involved with Cloud and not the other way around.

Now that it’s officially been released how do you feel about the record? Are you able to enjoy it as a ‘punter’ or do your feelings as the label boss get in the way?

I seem to like it more and more, I lay awake listening to it as Sunday evening turned to release day Monday morning and it just sounded better than it ever had before, like I really knew that I had had a small hand in something special. Then it started raining, which is my other favourite sound in the world - so I figured that as a good omen. I usually do give AAH records a little bit of distance post-release, which I think stems from a self-induced anxiety I picked up in when I thought I'd sent the wrong masters of Benjamin Shaw's first EP off to press (I hadn't), so I'm always listening out for errors or things I might have somehow ruined...but I always come back and they always sound wonderful. I don't just pick these motherfuckers out of hats!

In regards to being the 'punter' (isn't that totally the worst word in the world?) - that's all I ever want to be. I hate the idea of becoming "the professional" fan, the one who talks about "the fans" as though he's a rung above it...besides, I don't really think the music industry requires any real skill to work in, so where people pick up the self-importance it requires to be more than a fan is totally beyond me. Know everything, enjoy nothing...it sounds like a great path to follow!

‘Comfort Songs’ is available to buy direct from the label HERE or you can get it from the usual digital outlets.

Asking the questions was our very own @thedjcull