I like this album, the latest by prolific solo electronic Edinburgh artist Richard Haswell.  Itâ€™s extremely well produced, by the man himself, with references to post-Dark Side Pink Floyd. At times his voice sounds uncannily like Gilmour. But itâ€™s more imaginative than that â€“first track Jarvik-13 is a driving anthem with treated guitars that sound like bagpipes. The Distance Between You and I feels like dark dancefloor Depeche Mode. And his admitted influences sound like a dream playlist â€“ see below. Much is moving and mellow, especially the closer The Thinner the Ice.

I wanted to hear more â€“ which should not be hard, as Richard has recorded over 20 albums! Recorded, produced and self-promoted, single-handedly. I was fascinated by this alternative way of music-making, and Richard was very open to my questioning:

KH:  How easy it is it to self-produce your own material to this quality?

RH: If I was being honest the self-production process is a difficult and painstaking one. I don't have the best of equipment or software but having recorded on a 4-track tape recorder for years there are many advantages with computer software. Sometimes though a song will drive you to your absolute limit, as with Jarvik-13 (I almost lost the will to live mixing that! :). You are trying to get as close to the sound you have in your head and it often requires a lot of sifting and many different mixes before you get near that.

KH: Is it a personal choice, or would you prefer to be working with a label?

RH: Sometimes I feel I would like the support of a label, as to promote your own album requires a lot of work and it probably doesn't reach as wide an audience. Also the live aspect suffers - if I had a manager / label I would probably play live more but having to organise it myself it often gets put on the back burner. However I do love the artistic freedom I have to follow my own path 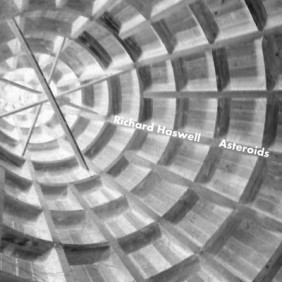 KH: I guess labels and managers give critical feedback, useful or otherwiseâ€“ do you miss this when working alone?

RH: The question regarding critical feedback is a good one as sometimes you're not sure whether a song or mix is good or not and feedback can be useful at that point. Over the years I've learned to follow my gut instinct. Until I get a song to the point where it moves me in some way and that 'sound in my head' has been achieved, I won't release it. I like to feel when an album is finished that it's the best album I could possibly make at that moment in time.

KH what was your inspirations for Asteroids?

RH: my new album is always a conscious reaction to the album that preceded it. In this case, Safety In Movement was very favourably received but I didn't want to make a Safety In Movement part 2. That album had more of a folk / acoustic feel to it so I deliberately stripped acoustic guitars from many of the songs and avoided violins / mandolins etc in favour of synths and treated electric guitar to create more of a pop / rock album. While that may disappoint those that like my acoustic work I felt by the time I'd finished mixing the album that I had achieved my objective. A lot of my musical heroes like Bonnie 'Prince' Billy, Tim Buckley, Richard Youngs, etc have been determined to follow their own musical path and they have been a great source of inspiration to me to do the same thing regardless of whether it's commercially successful or not - for me that is a bonus. I actually caught Richard Youngs live recently supporting Barn Owl in Glasgow and it was one of the most random, inspiring and unique performances I have ever seen.

KH: I saw him at Palimpsest in a Cambridge church a while back â€“ it was amazing!

RH: As regards the title Asteroids, I felt that, unlike Safety in Movement, which seemed to have a common musical theme running through it, the songs on this album were more fragmentary and seemed to inhabit their own world, a bit like random rocks hurtling through space! Lyrically too, on previous albums my lyrics were often semi-autobiographical whereas there was a deliberate attempt this time round to create characters for the songs and remove myself from the process, so in that way the songs were more individual instead of relating to a common theme.

If the notable influences on Safety In Movement were Will Oldham, Neu!, Townes Van Zandt, Radiohead, Eric Taylor, James Yorkston and Pink Floyd this time round it was Teeth Of The Sea, French Kicks, Wooden Shjips, La Dusseldorf, early Simple Minds, Nick Cave, and my favourite album of all time - Heartworm by the Irish band Whipping Boy.

KH: Are you playing live in the near future?

RH: There are no definite plans in place to play live yet but it would be nice to play some small venues later in the year on the back of this album release. I would like to play with a full band this time round so we''ll see what happens...

Richard's website is HERE for more information and music