How are you all feeling just back from your UK  & US tour?

Both tours were great and it feels like the new record has made a real impact on people who like our music and it's also introduced new people to our music as well and that's what we'd hoped for with this record. We're going to be touring both places again later in the year and if those tours were anything to go by then the band seems to be growing and reaching new ears very naturally.

Has your hometown of Kilsyth influenced your sound?

Andy and Mark stay in Kilsyth and I stay in a smaller village which is 3 miles away from them. I would say that where we stay influences the lyrics but as far as the sound of the band is concerned I'd say that it's more of a subconscious influence. If we stayed somewhere else I'm pretty sure we'd sound a lot different but it's not something we think about, we just do what comes naturally. All my lyrics are very personal and are about people I know and things that have happened to us over the years. I love where we live but I'm pretty sure I'm not giving it a good reputation with all the miserable lyrics and pretty disturbing images that those lyrics may induce.

Who were your musical influences when you were at school?

The first album I bought was "Everything Must Go" by the Manic Street Preachers. After that I went back and bought "The Holy Bible" by the Manics and that became one of my all time favorite albums. I listened to a lot of Mogwai and Arab Strap and still do, they are two of my favorite bands. 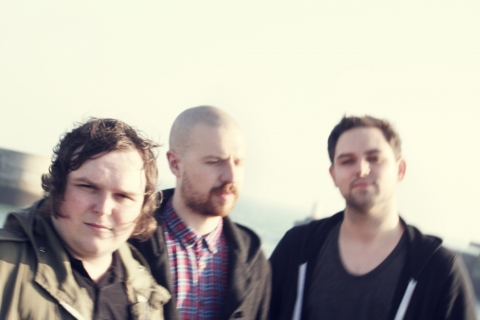 How you would say this record most strikingly differs from your previous albums?

I think it's a lot sparser than our previous records. I think the obvious changes are that the big wall of sound guitars are so prominent on this record and that old analogue synths have been introduced. I've said this before but we never want to make the same record twice and we want to try new things on each record we make, but at the same time we want to progress naturally and not force anything. The new sounds came around because we have grown up and started listening to different things, more so in Andy's case. Lyrically I'm still influenced by the same artists and where I live but I'm also listening to new things all the time, usually things that Andy has suggested I listen to.

How do you create your songs, on the road, when not touring, as a group, in isolation?

We only write when we're at home. Life on the road whilst touring is very stressful sometimes and road albums are usually shite. I'm in a different mind frame when I'm on tour than when I'm at home. I personally need to be at home so I can concentrate on what I'm doing. We all write separately as well. Andy will write some music then send it over to me and I'll write my melodies and a rough set of lyrics and then we'll work on a song structure. We then give the music to Mark and he writes his drum parts etc. I think it's good to write on your own or in isolation because you're not afraid to make mistakes in front of yourself. I would hate to for us all be in a room and have to come up with something in front of each other. I would never write a song just for the sake of it, I have to have something to write about.

Were there any instruments, equipment or effects that you used on this album that you hadn’t used before?

I'm probably the wrong person to ask as I'm just the singer and once my parts were recorded I headed to the TV room with a bottle of wine. We used some old Russian analogue synths where the only writing on them was in Russian so we had to figure out a way to figure it out if you know what I mean. Andy used a pedal called the "fuck, or fuck off" pedal for the bass distortion. Mark used all kinds of crazy samples for the drums/percussion.

What will be on CD or radio whist you are driving gig to gig on this tour and are there any bands on you radar that we really should be listening to?

Been listening to a lot of Scottish bands recently

Errors - Have Some Faith In Magic

Do you welcome the need to use social networking (twitter, myspace, facebook, tumblr.etc) as part of the promotion of the group or it’s just a necessary evil?

I used to see it as a necessary evil but now I'm alright with it as it's a way to connect with people who like your music. I have met and spoken to people I really admire that I would have never have had the opportunity to without the likes of Twitter. It's a great way to point people in the right direction of new songs, sessions, videos by us. It's also a great way of introducing people to bands we like or vice versa. Don't get me wrong, a lot of the things that I write on the bands twitter are complete nonsense but it's really good for a band to get info direct to people these days.

How much interest do you take in how your music is marketed, CDs, Downloads, Vinyl and where your music is, or could be used, advertisements / TV shows for example?

I believe that for a band of our size and who make the kind of music we do to reach as many people as possible, be that through a TV show, advertisements, radio etc. We're the type of band who don't get big breaks and don't get a lot of exposure so any way for our band to get that extra bit of exposure is a good thing in my book because there is so much competition out there these days. There's so many shit bands with loads of money behind them getting forced down people's ears so of there's any way possible for us to break through that pile of shit then we'll take it. Although saying that we would never give away or put our music to something that would lessen the reputation of the band.

What is your favorite venue in Scotland and why?

I suppose it depends what size of venue it is. If it's a small venue then it would be Nice & Sleazys because it's my favorite pub and the food is great. If it's a bigger venue then I'd say The Barrrowlands because it sounds great, looks great and because of the history of the place, plus I've seen some of my favorite gigs ever there. My dream is for our band to headline there one day.

How was the Valentines gig in London town?

Well it's been and gone. It was one of my favorite London gigs we've ever played. There wasn't much romance in the air but the crowd was amazing. It was sold out, so apologies to anybody who got dragged along to the gig by their partner.