Saint Sister are at a curious stage in their career trajectory. Their officially recorded output numbers seven songs (one EP and two singles), yet their popularity is such that they fill the sizeable, as well as beautiful, National Concert Hall in Dublin. How did they get there?

Gemma Doherty from Derry and Morgan MacIntyre from Belfast met in Dublin while both were singing with the Trinity College Orchestra. Gemma plays the harp and has a background in trad and classical music. Morgan was previously working as a solo singer/songwriter and is influenced by storytellers such as Joni Mitchell and Joan Baez. They started Saint Sister in November 2014. Their music has been described at atmosfolk. I find it reminds me mostly of 80's pop – in a good way: The gothic sound of the Cocteau Twins, the melodies of All About Eve and the poppiness of Strawberry Switchblade.

It is amazing how well their intricate music works live. Saint Sister have gigged mostly as a duo, with harp and keyboards. They use (but not over-use) a loop pedal at times. What will have done their popularity no harm is that they managed to appear at all the coolest of events: SXSW in Austin, the BBC Introducing stage at Glastonbury, RTE's Other Voices in Dingle and Eurosonic in Groningen (see YouTube for clips of their performances there).

I first saw Saint Sister live at Dublin's Christchurch Cathedral last November. That night felt like a carefully planned event as much as a concert, with special affects, lights and the venue itself all contributing towards the special atmosphere. They went a step further for their National Concert Hall show. Special mention first of all has to go to the support act, I Have A Tribe, a sympathetic solo artist who sings melancholic songs while accompanying himself on piano.

Saint Sister themselves pulled out all the stops for this concert. They still performed part of the show as a duo (and I hope they will continue to do this), but had two additional musicians on stage for the majority of their set. Furthermore, a three piece brass section and a six man/woman choir joined them for a number of songs. The result was amazing; it all sounded and looked beautiful. The girls have recently toured mainland Europe as support act for Lisa Hannigan, who came on as a special guest on the night. Lisa, Gemma and Morgan sang a song a cappella, followed by a cover of Leonard Cohen's 'Suzanne'.

In a perfect world the show would have been a couple of songs longer, but I guess it is always good to leave your audience wanting more. The band received a prolonged standing ovation for their efforts.
The concert was filmed, so hopefully we will be able to watch this again someday. I believe that Saint Sister have a great future ahead of them. Hope that they will release a proper album soon!

Catch them at the Lake Stage at Latitude in July or the Other Voices stage at the Electric Picnic in September.

I Have a Tribe 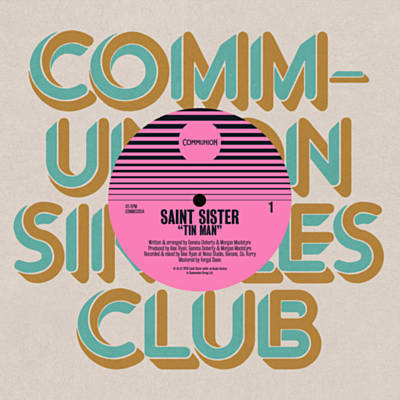