What a show, what a band and it's only Tuesday night. Sentiments often quite rightly chanted after any gig by Danny and the Champions of the World on any day of the week.

This particular Tuesday we are at my old hometown venue, the delightful Colchester Arts Centre. An old church, now with a bar and a stage instead of pews. It has been transformed for many years now and is a fine venue and well worth a visit.

First up tonight was Magic Number, Michele Stoddart in Americana guise with an electric guitarist by her side. Certainly an additional string to her bow. Sweet songs and a charming couple.

A quick turn-a-round and Danny and the Champions of the World are on before 9pm. What follows is close on two hours of "The sensible Job" (the alternative is "running away with the circus" apparently), which means the six piece including a pedal steel and a Sax player blast through their ever increasing catalogue of good humoured riotous Americana.

Danny's voice gets gravellier and his enthusiasm for the task at hand seems to grow with every tour. This is a band that rarely rests and when they do, they are usually in the studio recording a new record as with this year's LP 'What Kind of Love'.

You will find that many of the songs are stories either, from the road or about the many facets of love and in love with the band the audience certainly are, after 20 minutes the crowd are dancing and at the two thirds point of the gig, we are all led on a Tuesday night conga around the venue by the band's Sax player.

A more brilliant and down to earth band as you could ever wish to encounter. Make sure you see them, next time they are in your town. 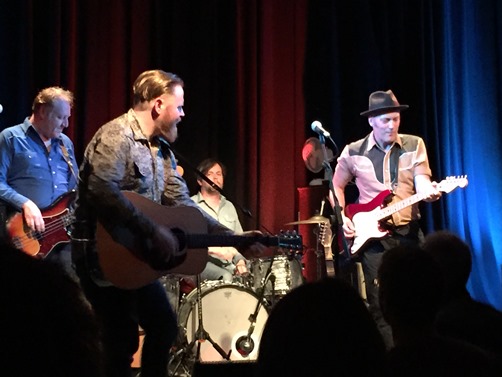