Tonight was due to be Slowdive's first gig in more than twenty years, but even an unannounced warmup show the night before renders it no less special for the fans packed into the Village Underground venue in Shoreditch to witness the big reunion. As leading figures in the early '90s 'shoegazing' scene the band were as much loved by their devoted fanbase as they were derided by a music press increasingly obsessed by the sordid glamour of US junkie rock.

Slowdive recorded three albums only before the inevitable split, but the reverence with which they are treated amongst a new generation of musicians and fans, and the speed with which the tickets for this sold out show were snapped up suggests the band will have the last laugh.

Despite our queuing outside the Village Underground well before the announced 8pm stage time of support band Young Husband the venue somehow contrive to open the doors late and then take so long to check and process tickets that we miss half of the support set. A subsequent twitter exchange with the venue suggests this was down to the band's management (which band I wonder?), but it's still annoying when you've sacrificed that extra, reasonably priced, pint in the pub to go in.

Anyway, I can hear the influence of Slowdive, and even more of the spikier Ride in Young Husband's effect driven guitar sound. There are a lot of bands ploughing the particular furrow right now, but there's enough in their driving live sound and the songwriting to suggest these guys can stand out from the crowd.

Slowdive take to the stage to the strains of some Brian Eno elevator muzak (Deep Blue Day) and, after a bit of FX pedal fiddling launch into 'Slowdive' from their first EP. I'm immediately struck by how good the sound is. The band's sound is so dependent on the washes of guitar sliding over the ethereal vocals, it has to be spot on, and tonight it is. The third song in, the beautiful 'Catch the Breeze' from debut album 'Just For a Day', sounds stunning, all chiming guitars and hazy vocals; everything that was good about this band encapsulated in one song, it really hasn't dated at all.

Despite it being more than two decades the band don't seem rusty. Neil Halstead may have replaced the cherubic choirboy look I can recall from early '90s gigs with more of a mountainman beard and shaggy hair combo, but the guitar sound seems to come back naturally and the vocal harmonies with lead singer Rachel Goswell work a treat. The fact the pair continued working together in Mojave 3 doubtless paying dividends.

Second album 'Souvlaki' is well represented tonight, 'Souvlaki Space Station' and the closing 'Alison' showcasing the poppier angle the band pursued on that record nicely. It's a sensible choice as these songs work so well live, but I can't be the only one left wishing that they'd played more than one thing off their sublime debut album. They've a world tour ahead of them though, so doubtless the opportunity to work through the back catalogue will present, and there's even talk of recording a new album.

Welcome back Slowdive! It's been too long, and you have been missed. 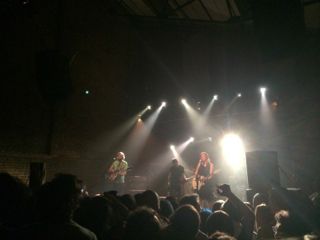 When the Sun Hits