Kishi Bashi has just released a new video lifted from his superb new album 'Omoiyari' which, out now on Joyful Noise Records.

This thoughtfully animated clip for new single 'Violin Tsunami' intersects with the inspiration behind much of 'Omoiyari', which is heavily informed by President Roosevelt's internment of over 120,000 Japanese-American citizens following the Pearl Harbour attacks in WWII.

Speaking about the video, Kishi (who began playing live with Of Montreal & Regina Spektor before launching a solo career) says; "The inspiration for the song came from a violin that was gifted to me called ‘Tsunami.’ The luthier, who is Japanese-Brazilian and an ordained buddhist priest, told me he embodied his prayers for the victims and survivors of the Fukushima tsunami tragedy into the making of the instrument. I immediately began to play it and was inspired to create a piece of music about the injustice of the Japanese-American Incarceration of WWII. In the video, the spirits are ultimately transformed into a peaceful bed of lanterns that embody the spirit of healing and the transmission of memory.” 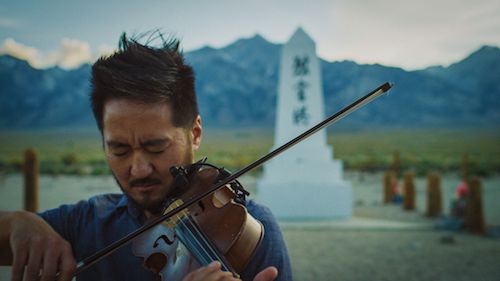