Sam Sweeney Band - The Brewhouse - Burton on Trent - 16th May

Despite being a well known and highly regarded musician since the early 2000's, and a member of Bellowhead since 2008 when he was 19, it's a still youthful-looking but now bearded Sam Sweeney that walks on stage picks up his violin and starts to play an enchanting waltz.

As the tune changes he his joined by the other members of his touring band : Jack Rutter (one third of Moore, Moss and Rutter and a solo musician) on acoustic guitar; Double bassist in demand Ben Nicholls whose list of collaborations would fill a paragraph on its own; and a shoeless, red and white stripped socked Louis Campbell (National Youth Folk Ensemble and solo) on electric guitar and effects.

Sam tells us that the waltz originated from Derbyshire, checks with the audience that tonight's show is in Staffordshire and that there's not a “thing” between the two counties. Although supporters of Burton Albion and Derby County may disagree on this when the two teams play each other next season.

The playing from all four members of the band is never less than exceptional tonight. After a couple of wonderfully played tunes, one of which was passed to Sam from a student in the USA during his Covid- required Zoom tutorials, there's a Morris inspired tune 'Maid of the Mill' at the end of which we discover that there are more active Morris dancers in tonight's audience than that of Oxford, but Stamford currently holds the tour high count.

The tour was originally booked to support the release of Sam's 2020 album 'Unearth Repeat' on which he has modernised trad English tunes via the inclusion of different instrumentation, a theme continued into a new tune during which Louis uses pedal effects and David Gilmour style sustain on the guitar. 'Highway to Warrington' has a uptempo, jazzy feel and a track from Sam's recently released 'Solo' e.p recorded in St. Martin's church in Stoney Middleton is a lovely duet between Sam and Louis.

We have an impromptu Q&A during which it's revealed why Sam took his driving test in Burton-on-Trent and details on his songwriting techniques are discussed.

'Shepherds Hey' is a track Sam was asked to produce an arrangement of with other Commonwealth musicians for the 2018 Commonwealth Heads of Government meeting held in the UK. Whilst the catering sounds less than satisfactory (a make your own cheese sandwich kit) notably Justin Trudeau the Canadian Prime Minister congratulated them after their performance.

The musical ability of the band combined with Sam's relaxed, humorous demeanour make this a wonderfully entertaining evening listening to some of finest players of traditional music you are likely to hear.

Whilst the tour in this format has now finished, Sam will be working a double shift when the Sam Sweeney band support Bellowhead on their Back Together Broadside 10th Anniversary tour in the UK during November 2022. 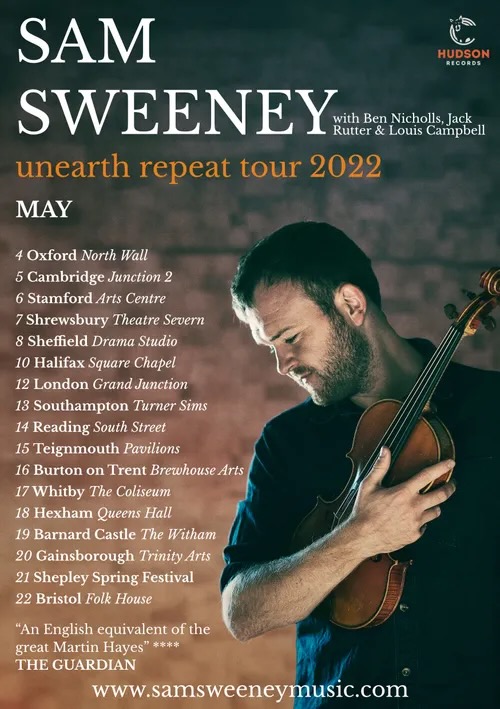