Despite largely distancing herself from the music industry in 2019 as a means of self-preservation from the expectations which Mitski felt were being placed upon her. Mitski fandom ('Mitskimania') only appears to have grown exponentially since then.

The New York Times reported over 2.5 million user-generated TikTok videos featuring her songs and billions of viewings, the current tour promoting recent album 'Laurel Hell' is sold out throughout the United States, UK and Europe and six hours before the doors open the queue of expectant young adults and teenagers outside L'Olympia is already close to a hundred.

Mitski's stage entrance is greeted by the first of many ear-splitting, Gallic screams, she's dressed in a flowing white dress and floats centre stage to sing 'Love Me More' the first of several tracks from 'Laurel Hell'.

Her excellent five piece band all dressed in black and masked are at the back of the stage which gives Mitski plenty of space to perform her carefully choreographed movements during the show, each met by further screams. For a reportedly untrained dancer she gives a wholly committed, physically-punishing performance involving elements of : ballet; mime (pulling petals from a flower and blowing them into the audience during 'Washing Machine Heart'); theatrics (Hamlet talking to Yorick's skull, during 'Working For The Knife' Macbeth's “Is this a dagger I see before me?” using her handheld mic to simulate slashing her own throat); interpretative dance (pretending to pull her ribcage open and removing her heart, scrubbing her arms clean) and automaton impressions (echoing Sally Ann Howes' Truly Scrumptious on a musical box in Chitty Chitty Bang Bang).

As each song finishes with a stage blackout the hall erupts “Mit-ski, Mit-ski, Mit-ski....” and further screams as they recognise the opening notes of the following song. Perhaps the stage blackouts are part of her desire for self-preservation and distance; the only time Mitski speaks during the main set is to apologise for her inability to speak French “I'm so sorry I don't speak French, I could try but you wouldn't like it.”

Whilst she is well known for her uptempo pop moments such as 'Nobody' or 'The Only Heartbreaker' she doesn't neglect her indie-pop side. 'Francis Forever' and the squealing guitars of 'Townie' are played, Mitski headbangs, punches and kicks the air during the big, guitar crashes in 'Your Best American Girl' and during a dramatic 'Drunk Walk Home' she staggers and throws herself around the stage, putting the flesh-coloured knee pads to good use.

After finishing the main set with an epic, emotional 'A Pearl', during the one song encore which is the balladic 'Two Slow Dancers' Mitski remains static at the mic apart from a bow at the end. As the band leave the stage she has gathered up an armful of bouquets of flowers, a pink cowboy hat and other presents from the audience “ Thank you so much. Have good night. Until next time.” and with a wave she's gone.

Her opening request to the audience to 'Love Me More' would not seem possible based upon the reaction and connection she clearly has with her audience during this unforgettable, spectacular show tonight. 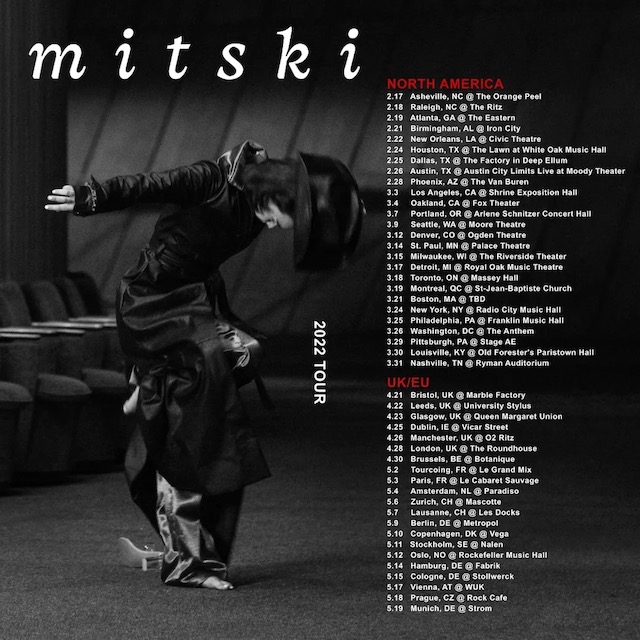