I almost didn't go. The last time I had seen Echo and the Bunnymen live they had only been average, and after reading David Cavanagh's startling interview with Ian McCulloch in Mojo a few years ago, I thought it better to leave my memories as they were. I am also weary of the heritage circuit - bands who only play their early songs to fans unwilling to hear anything that was released after they reached their mid twenties.

These remain strange times for the gig-goer. I found myself in England on a trip initially planned around concerts that were now all cancelled. I still dismissed the idea of going to see Echo and the Bunnymen, until I saw a tweet by Kit Bailey. She had been to the tour opener in Sheffield, and mentioned Echo and Norma Waterson in the same sentence, about the joy of singing with arms aloft. This sounded appealing. The Roundhouse show was sold out, but I managed to get a ticket and had a few days to listen to the phenomenal back catalogue in anticipation.

This was my first proper, big, standing-up gig since the pandemic (which was much longer and stricter over in Ireland where I live). I loved every minute of it: Looking at the merch, drinking beer out of a plastic cup and getting a spot on the barrier. Instead of a support act, former Creation boss Alan McGee was deejaying. He stood behind a desk, not engaging with the audience and not appearing to be playing records, but the music was good.

Prior to the band arriving on stage, clouds of dry ice were blown for about fifteen minutes. Anticipation thus built, the band walked on. They were a six piece. Apart from original members Ian McCulloch and guitarist Will Sergeant, there were bass, drums, keyboards and rhythm guitar. Good musicians, who would have deserved an introduction.

Ian and Will were both dressed for winter, in coats. Will's guitar lines were sharp and clear. I look forward to reading his acclaimed memoir, 'Bunnyman'. Ian looked the same as last time, hiding behind sunglasses, hair a little flatter perhaps. He was in fine voice. The overall sound was fantastic. It probably made all the more impact, having not heard a full-on rock band over a PA for almost two years.

Ian did not talk much. There were some quasi angry mutterings. He comes across as Liam Gallagher's older brother, more so than Noel (Noel Gallagher incidentally was at the show). When someone in the crowd shouted something Ian asked for it to be repeated, but these exchanges did not amount to much. Come to think of it though, he never was someone who talked much in between songs.

As for the songs - masterpieces all: 'Rescue', 'Over The Wall', 'All That Jazz', 'Villiers Terrace'. I was really pleased that they included some relatively newer (i.e. not from the classic first four albums) material: 'Lips Like Sugar', 'Flowers', 'Nothing Lasts Forever'. I had revisited some of the albums the band released in the late 90's, 'Evergreen' and 'What Are You Going To Do With Your Life' - beautiful, mellow albums, that do not get the credit they deserve. I do not know why that is.

I am currently reading Brett Anderson of Suede's second book, and he ponders a similar thing: "I've always had an idealistic and probably woefully naive belief that it is the quality of your work that will steer you towards success but when I see a band like Echo and the Bunnymen for example propping up festival bills and playing support slots to paltry, disinterested audiences after having made some of the most celestial, life-affirming music of the eighties while some of their contemporaries fill the arenas of the world I have to admit that the whole process is beyond any sort of formula and obviously reflects the absolute subjectivity of music and art in general" (Brett Anderson, 'Afternoons With The Blinds Drawn', 2019).

Thankfully this was not a disinterested audience, but a full capacity Roundhouse. There will be a second London concert at Shepherd's Bush on 22 February. The show got better and better towards the end, and I do wish it had been longer. 'Nothing Lasts Forever' was meshed beautifully with 'Walk On The Wild Side', and 'The Cutter' was particularly impressive, with a mass audience singalong.

Only two songs from one of my favourite albums of all time, 'Ocean Rain', but then the band have toured that album in full before (I caught it at the John Peel stage at Glastonbury; superb) and the title of this tour is 'Celebrating 40 years of Magical Songs'. The final encore was 'The Killing Moon'. As Will played the intro I was suddenly back in the social club at secondary school, where I used to have a weekly deejay stint during the morning break. I only had time for four songs - 'The Killing Moon' was a statement.

After this show it is my sincere wish that the Bunnymen will come around again, and release new music alongside all those reissues. May they have a Johnny Cash-style late career renaissance. 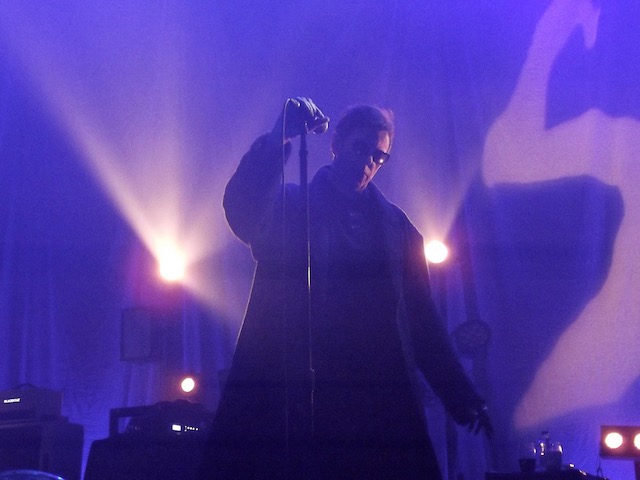