Manic Street Preachers' two nights in support of the NHS (the previous night was free to NHS workers) were originally organised for December 2020, however a serendipitous set of events means that these twice delayed shows are happening in the same week that the Manics' 14th studio album 'The Ultra Vivid Lament' is No.1 in the UK. Tonight's set consists of tracks from the new album, covers and a selection from the 'National Treasures' singles collection.

Prior to the band appearing on stage there are selected quotes from Nye Bevan (born in Wales and creator of the NHS) projected onto the giant screen . Opening with James Dean Bradfield's wailing guitar intro to 'Motorcycle Emptiness' from 'Generation Terrorists' which will be celebrating it's 30th birthday next February it's clear that we're in for career-spanning show tonight.

Early in the set there are a couple of the power pop James duets. Cat Southall more the capably filling Julia Cumming's place on 'The Secret He Had Missed' and Nina Persson's in 'Your Love Alone Is Not Enough', although the audience down the front are more than well rehearsed in the call and response parts of that song.

The first of the covers is Echo & The Bunnymen's ' Bring on The Dancing Horses', the Manics being long-time fans and lead singer Ian McCulloch appeared on the 'Postcards From a Young Man' album. The title track of that album is the first in James' acoustic set and is followed by Frankie Valli's 'Can't Take My Eyes Off You' invoking a mass sing along in the “ da da da da aaaah...... I love you, baby and if it's quite alright I need you, baby” section. The full band return for Guns N' Roses (bass player Duff McKagan also appears on the Postcards ... album) 'Sweet Child O' Mine', during which James unnecessarily asks the audience to wish him luck as he nails Slash's guitar solo.

The evening moves to a close via more from the National Treasures compilation. Cat Southall making her third appearance taking Traci Lords' lines in 'Little Baby Nothing', the tempo and ferocity increases through 'Slash 'n' Burn' and 'You Love Us' . James says Thanks and Goodnight from all four members of the band just before the final track for the evening 'A Design For Life', in an extended instrumental break bass player Nicky Wire gives his thanks “ Thank you Cardiff, we fucking love you. Thanks to the NHS for always being there for all of us.”

A perfect way to end an emotional and celebratory evening; one national treasure playing music in support of another. 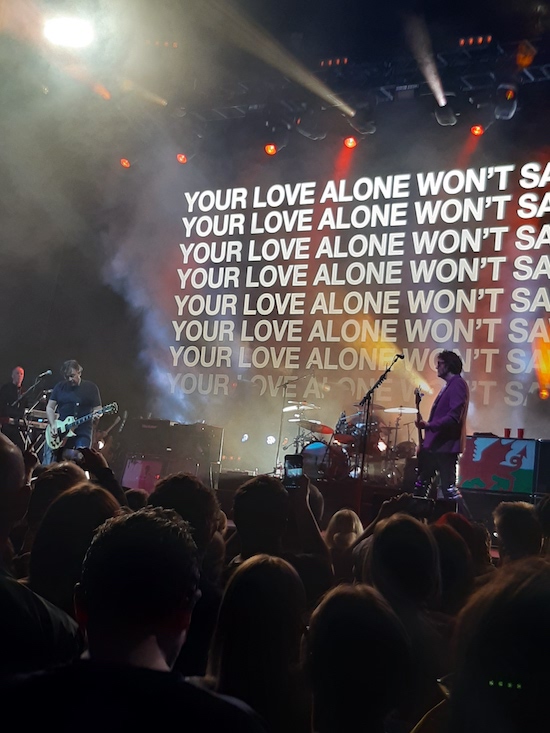