After a gap of 525 days a return to live indoor music in a new venue in the centre of Derby. The reason is to celebrate 10 years since Lucy Ward (Radio2 Folk Award Winner and local folk star) released her debut album 'Adelphi Has To Fly'.

The venue itself is a semi-permanent tent, think more of the glamping end here as it has solid sides and carpeted floors. There are concessions to the current climate as we are all seated and separated, there's a ventilation system, hand sanitiser stations are available and masks worn if preferred.

Lucy plays through the album from start to finish very ably accompanied by the multi-tasking and talented Steve MacLachlan on percussion, bass and keyboards. Opening track 'The Fairy Boy' reminds you how astonishingly expressive and powerful Lucy's vocals are. “Ay Up Derby” says Lucy “... it's such a privilege that you've chosen to spend your evening here, hope you have a cracking night.... On with the misery” and indeed the next track is pretty miserable as it's the true story concerning Little Eaton's Alice Grace. 'Alice In The Bacon Box' pretty well describes the fate of the unfortunate woman which is delivered with Lucy's tender vocal and guitar playing.

Folk music often features songs of misery, death and sex so it's high time to hear about the latter. 'Maids When You're Young' is a traditional song which Lucy first heard sung in a car park in Willington and has been a regular part of her live set. The track which is delivered with Lucy's characteristic humour and energy advises young women to avoid marrying old men as “...they've got no faloorum, they've lost their ding doorum dah..” (use your imagination here) . The development of Viagra rendering both conditions less prevalent perhaps.

After unnecessarily apologising that her pregnancy has reduced her lung capacity, the pace slows for 'Julia' and 'Adelphi' which are beautifully sung. The most traditionally 'folk' song on the album is 'Stitch In Time' which was written by Mike Waterson of the legendary Waterson family. It's a female revenge tale in which the abusive, drunken husband is sown into his bed and retribution is taken via a frying pan, a colander and a rolling pin !

The always powerful 'For The Dead Men' is dedicated to those who have no voice “...stand up and take to the streets, they can't ignore us if we all choose to speak..” We finish the evening with an uplifting and emotional folk favourite “The King of Rome.” The pigeon of that name uses his determination and perseverance to battle through a terrible storm to unexpectedly return to his home in the West End of Derby from the race start in Rome. The heroic bird is on display in Derby Museum if you wish to see him.

“Take care. Stay safe, support live music where you can” says Lucy. An appropriate choice of song and sentiment to finish a wonderful and emotional evening. Happy Birthday Adelphi. 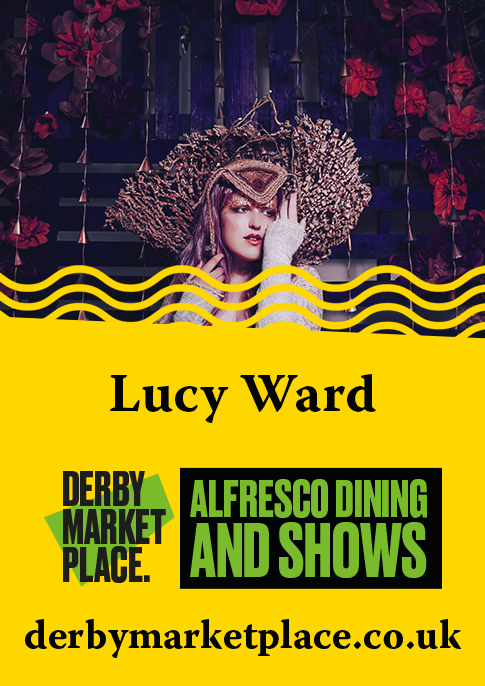