I’ve seen IDLES live 9 times in the past 2 years – from sweaty sessions in seaside towns, through two sets in a day at Glastonbury and on to their triumphant show at Ally Pally. Each one has been a visceral and vital experience, from the pre and post show meets with AF Gangers to singing ‘Danny Nedelko’ with Bobo on the front barrier at the End of the Road festival.

So I approached these livestreams with some trepidation but also an open mind – let’s be clear, livestreams aren’t the same as a live gig, and they never will be, and IDLES have such a rapport with their audience that it’s hard to know how they’ll be without one. These gigs are also unusual in that IDLES have published the setlist for each in advance, although there’s still the excitement of finding out which song they’ll choose to cover in each set, and the chance to see some of the new songs performed live for the first time. So it’s approaching 9pm, I’ve had a couple of beers to get in the gig mood, and I’m ready to take whatever Joe and the boys throw at us.

Bobo’s had a haircut! That’s the first thought that grips me as the band launch into ‘Heal / Heel’, the traditional set opener from early tour days. A couple of songs in and Joe has to restart ’Stendhal Syndrome’ as he got the lyrics wrong, but this actually adds some welcome interaction to what has so far been a rather remote experience. The lack of crowd or any conversation between songs makes things a bit sterile, with Joe himself saying ‘I’m not one for chit-chat anymore’.

‘Kill Them With Kindness’ is the first new song of the evening and it’s great – at points it seemed a bit like The Fall (which is a good thing). I suppose some people like ‘Gram Rock’ but it’s my least favourite IDLES song, but ‘Date Night’ does a good job of helping me get over that.

This set’s surprise cover is a downbeat version of ‘I Wanna Be Sedated’ by The Ramones, which Joe seems unhappy with afterwards, but he pulls himself together for ‘Mr. Motivator’, which is definitely better live than on record. ‘1049 Gotho’ is the first song tonight that actually gives me the proper live chills and reminds me of all the great shows where I’ve seen it played. The live vibe continues with ‘Television’ before Joe apologises again for his nerves and lack of talking, and then the first livestream concludes with traditional IDLES show-closer ‘Rottweiler’ and a very smashed guitar that definitely won’t be making an appearance in the next show.

Overall I’m not sure that the way the band was set up and the cameras were placed particularly suited them, or maybe it was just nerves, but for me it took until the last 3 songs until we finally got to see the IDLES I know and love. Let’s hope they can keep that energy level up for set 2 in a couple of hours.

A beer and a large rye whisky have helped me through the intermission and I’m ready for ‘Colossus’ to open the set like it has done on most of the recent tours. There’s been a few outfit changes in the break but luckily the nerves seem to have gone and it’s a much more positive start. ‘Grounds’ takes me back to the first time I heard it at Ally Pally and makes me desperately want to be in the middle of a sweaty gig crowd again, a feeling that’s only amplified by ‘Mother’ which I sing along to swearily.

Appropriately for Abbey Road, the ‘All I Want For Christmas’ part of ‘Love Song’ is replaced by ‘All You Need Is Love’ and ‘Up Where We Belong’ which Joe and Bobo sing while Leee climbs the stairs and becomes ‘Lee In The Sky With Diamonds’ before jumping back to earth. After some technical adjustments Joe dedicates ‘Rachel Khoo’ to the AF Gang, a nice touch for a song that a lot of us have never heard played live before. That brings us, after a restart, to the cover version for this set, which turns out to be storming version of ‘Reptilia’ by The Strokes, who are apparently one of the reasons IDLES exist.

Energised by this the band throw in an off-setlist ‘White Privilege’ before raging triumphant through the last 4 songs. With one off each album and the ‘Meat’ EP these are a perfect summary of IDLES in terms of both their sound and their lyrics. They’ve really hit their stride by this point in the livestream and are easily replicating the sound and feel of their proper gigs. ‘Danny Nedelko’ is still one of their finest moments and ‘Well Done’ is a perfect way to end the set.

Set 2 was a huge improvement on set 1 – I think the choice of songs helped but the energy level and performances were much better and it seemed to show the essence of the band in a much more positive way. With that it’s time for bed before Round 3 tomorrow.

It’s Sunday lunchtime but instead of sitting in front of a roast I’m in front of my TV for the third and final session. They’re straight out of the blocks with ‘War’ which opened the Ally Pally show and seems nailed on to be a great start to the next tour. Bobo is continuing to wear far more clothes than he used to and everyone seems match fit and rested after a night’s sleep. ‘I’m Scum’ is packed fill of energy and Joe seems far more relaxed about getting the lyrics wrong today. They power through ‘Mercedes Marxist’ and an incendiary version of ‘Faith in the City’ and I’m wondering how they’re managing to make Sunday lunchtime feel like Friday night at your favourite venue. Despite the fact that I’m on my own I still shout along with Joe like I would in the sweaty mosh pit when he says ‘I kissed a boy and I liked it’ and he echoes everyone’s thoughts at the end of the song when he says “I’ve missed this so fucking much”.

The live debut of ‘A Hymn’ is an intense and powerful moment that’s sure to break a few hearts when we can experience it on the tour next year. The NHS gets a worthy dedication for ‘Divide and Conquer’ before we’re serenaded with ‘Cry To Me’. There’s a rare outing for ‘Slow Savage’ and then a wild version of ‘Benzocaine’ which sees everyone playing like their lives depend on it. All too soon we’re at the end of the set and the surprise cover version, which this time sees Bowen and Joe sharing vocals on ‘Helter Skelter’ with a bit of ‘Pure Morning’ thrown in for good measure.

And then everyone’s favourite boy band from Bristol are gone, leaving us wanting more which is how it should be. Set 3 was as good as set 2 and definitely saw the band at their most relaxed of all the shows.

Overall thoughts? It was great to hear the new songs (can’t wait for Ultra Mono) and to see the band back together, especially once Joe’s nerves had gone and they were all able to be themselves. Like I said at the start, it’s not the same as being at a live gig but the music industry, like many others, is in a perilous state and needs to do what it can to make some money and keep engaged with fans. I’m not sure what the answer is but while we’re all waiting for the chance to get back in front of a band then I’ll try anything for my music fix. 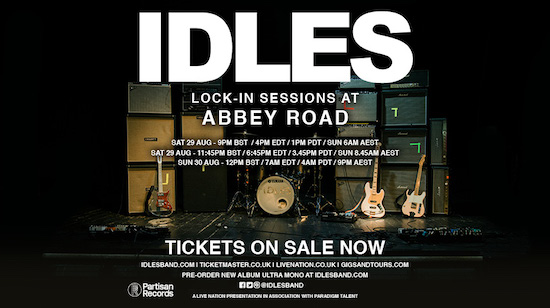