The venue interior looks more elegant than usual. Perhaps that’s because Nick Cave is in it. Dressed in Gucci, by Alessandro Michele (there were credits at the end... of a gig). How much is it worth paying for a gig you can only watch on your tele, or a laptop, or a tablet? Each to their own devices, I suppose.

I’d argue Nick Cave’s ‘Idiot Prayer’, this solo performance at a piano in London’s Alexandra Palace, shows that just like most things, we all place our own value on this and that.

This and that tonight was £16. The gig arrived via the mobile phone app called Dice - a code sent to my phone at 7.45pm for an 8pm start. Fifteen minutes, so time to pour a glass of high-quality ale that’s precisely not £6 for can of Red Stripe.

A gig via an app. This was always going to get sweary because generally, I prefer an analogue life. But fair play, if you put the time in (enter the unique code on the Dice website) and can master ‘Air Play’ or ‘mirroring’ (yep, totally fluked it) then you will know that the sound and vision can, eventually, be superb.

For reference, I watched via my laptop and a projector, toothed up to my stereo and with the images on a wall. A giant moving and singing Nick Cave, in my living room.

There have been a lot of lockdown gigs and streams. Now we are in some sort of mockdown lockdown purgatory period, live music seems almost within reach again. But this live recording, possibly because it was so artfully created, was an especially sad reminder of the distance we’ve been keeping from one another. This was Nick Cave alone with a grand piano in a cavernous venue that is still too small for his songs. And yet it was impossibly, almost unbearably intimate at times.

Like the Palace or loathe it, intimate is not a word you’d normally associate with this particular venue. However, the venue was a star in this too – wonderfully cracked and weathered, like the man himself and his voice, which is stretched to breaking on the song ‘Waiting For You’.

The songs are all magnificent. It is a flawless set. ‘Higgs Boson Blues’ puts Switzerland firmly in the sweltering Delta sun, ‘Mercy Seat’ conjures devils, ‘Jubilee Street’ is an Everest of a song, and ‘Into My Arms’ is confirmed for the umpteenth time as one of the most romantic songs ever written.

The close-your-eyes moments are ‘Girl In Amber’ and the brand new song, ‘Euthanasia’. These songs, in this performance... to create such beauty from the depths of grief is an incredible gift to us all.

Among the inevitable darkness and light, Cave even giggled to himself after the eighth song of the set. If it took one take or a baker’s dozen to create this show, Cave dignifies the whole experience and it was a relief not to be holding my phone up to take all those pictures [we never look at]. Watching him stride into the light at the end, this was masterful filmmaking too.

‘Thank you for watching’, it said at the end of the credits (a credits list of 20+).

I pressed rewind and watched it all again. How many times have we wanted to do that at the end of one of those kegged-wine and Tuborg-fuelled “best gig I’ve ever been to” nights.

It’s true, it wasn’t quite the same without the bright house lights coming up, security ushering to the exits, crunching over plastic cups, forgetting what bus to get home... and pondering a kebab.

Thank you, Nick Cave. Like the Bad Seeds cinematic Copenhagen concert, this was probably the best gig I’ve never been to. 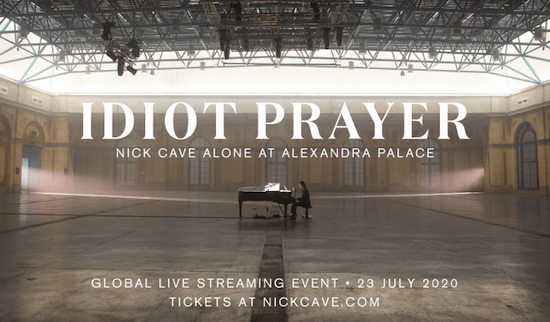 Man In The Moon

(Are You) The One That I’ve Been Waiting For?