“Frank Turner will be performing his most original project to date”, proclaimed the venue program. That venue was the Birmingham Symphony Hall, a spectacular place for a concert. 'No Man's Land' was released in the summer. Frank's eighth album to date is a concept album, celebrating remarkable women who are not as famous as they ought to be. The album was accompanied by a podcast series with an episode for each song, delving further into the stories of the female protagonists.

The album was recorded not with regular band the Sleeping Souls, but with a selection of female musicians and producer Catherine Marks (Wolf Alice, Local Natives, the Wombats). For the 'No Man's Land' tour however, Frank opted to present the work solo. It is the measure of a good song that it can be brought back to just vocals and guitar, which was very much the case here.

The show started off with 'Jinny Bingham's Ghost', a high energy song about a supposed witch who ran a tavern in Camden, nowadays the World's End pub.
Frank talked about the women in between songs. My favourite story is 'Nica', about Nica Rothschild, a privileged heiress and baroness, born in London, who in 1948 heard a Thelonius Monk record and promptly decided to abandon her husband, children and comfortable circumstances, and to live in New York and become a patron of jazz musicians. Fascinating.

Standouts of this part of the show were the catchy 'Sister Rosetta', about blues musician Sister Rosetta Tharpe, and 'The Death Of Dora Hand', a song with a Seeger Sessions vibe to it. Frank finished up with 'The Lioness', about Huda Sha'arawi, an Egyptian feminist who in 1942 publicly removed her face veil. The accompanying podcast in which Frank talks to Huda's granddaughter is a recommended listen.

In the interval we were treated to Brian Eno's 'Music For Airports'. I discovered Eno's wonderful ambient albums a few years ago and loved hearing it over the PA in this big auditorium, as people chatted, got drinks and anticipated part two. For this part of the show Frank had promised a run-through of his back catalogue, with deep cuts and alternative versions.

Since I am the opposite of a fan who wants to “just hear the hits”, I knew this would be right up my street. Whilst it was neither acoustic nor unplugged, it was definitely very different to a regular Sleeping Souls show. The band were sitting down, wearing regular clothes and many of the songs had folky arrangements. Drummer Nigel Powell in particular got more of a chance than usual to show what a fantastic musician he is.

Storytelling was a significant component of this part of the show and some fans had suggested that Frank has been inspired by Springsteen on Broadway. I had actually asked Frank about this some time ago (on the “Ask Me” section on his website) and at the time he replied that he had not made it to Broadway. He may of course have seen a recording of the Springsteen show since. Whilst Frank's show was much more light-hearted in comparison, the format was indeed similar, in that Frank talked about his life, his loves and his music, and he explained very openly what the songs were about. There were parallels to his book, 'Try This At Home – Adventures In Songwriting'.

There were many highlights, including less often played material ('Journey Of The Magi') and songs that were presented in versions very different to their originals ('I Am Disappeared'). One of my personal favourites is 'One Foot Before The Other', and it is only now that I fully understand what that song is about (Frank wants his ashes distributed in London's drinking water!). A large part of the story detailed Frank's unsuccessful love life, but there was a happy end with 'There She Is', written for Frank's wife whom he married earlier this year.

'Don't Worry' from last year's underrated 'Be More Kind' album is as relevant now as when it was written. Frank mentioned that he was in a hurry to get that album out, in case the world would change for the better in the interim, which of course has not happened. The final pre-encore song was 'Balthazar Impresario', one of the best songs Frank has ever written, which he famously and mistakenly relegated to a B-side. It now had pride of place as the closing song and it sounded just right in this magnificent concert hall.

As the encore started with the opening chords of 'Photosynthesis', many jumped to their feet and rushed towards the stage. The party continued with 'Recovery' and 'I Still Believe', before the night ended with 'Be More Kind', in a fantastic new version, slowed down, with Frank's voice going up an octave towards the end. An improvement on what I thought was already a perfect song.

Frank describes himself as an entertainer and he does indeed put on a full evening's program which is excellent value for money. To fit it all in, the venue had emailed ticket holders to advise earlier door opening times, with the support act starting at 7 p.m. Support came from Emily Barker, a long time touring partner of Frank's. They first met in 2007, and have collaborated and toured together frequently over the years.

Emily performed solo, playing guitar and harmonica, occasionally adding percussion via foot pedal. She has an amazing voice and is a great songwriter. I have been following her musical output for some time now, and Emily is an expert in keeping things fresh through getting involved in many different projects. She had her own band, the Red Clay Halo, but has since been involved in an Anglo-Swedish alt folk trio (Vena Portae), a Nashville-based folk trio (Applewood Road), released an acoustic solo album, a full band soul album, a collaboration with Marry Waterson, and on this tour she was promoting her compilation 'Shadow Box'. During the show she mentioned that she had just recorded a new album. Hats off!

From 'Shadow Box' Emily played her Springsteen cover 'Tougher Than The Rest'. Her 40 minute set also included 'Sister Goodbye', her own song about Sister Rosetta Tharpe, (which predates Frank's), and two new songs. My favourite of her set was 'Disappear', a song from the Red Clay Halo days.

During the tour Emily posted a tweet that prompted a lively discussion about the issue of commission on merchandise. For the show at Newcastle's O2 City Hall Emily announced that she would not be selling any merch as the venue would charge 25% commission plus VAT, which would wipe out her profit margin. She added that she did not want to raise her prices, that her music was available via her website and that she would be out in the interval to chat.

Her tweet gathered many reactions and a lot of support. I talked with Emily at the merch desk in Birmingham and she mentioned that a Canadian festival had since gone public with their zero commission policy to support this case.

Present at all shows on the tour were Safe Gigs For Women, an action group who are working with gig goers, bands and venues to raise awareness and make gigs safe and pleasant for all. They educate gig goers as to what they can do when they see someone being harassed. See details here.

Travelling along as well were the Solo Armada, a group who are passionate about live music and who are there especially for those who may not have anyone to go to concerts with and need some encouragement to venture out alone. Their website is here. 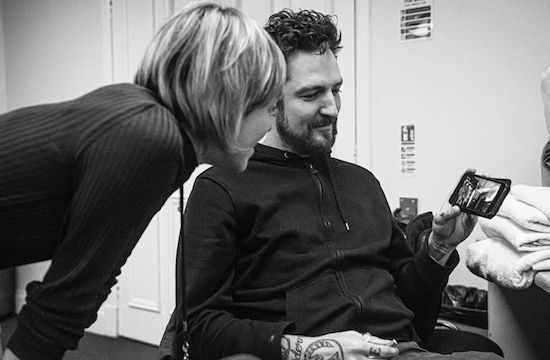