“Hello, It's us again, back at the Foxlowe. I recognise some of your ....clothing” says Simon Nicol guitarist and vocalist of Fairport Convention setting the relaxed atmosphere for this evening on their Spring tour 2019. The Fairport Spring tour is a more relaxed acoustic stroll round the country, the band are seated on stage, Simon's guitars are acoustics and drummer Gerry Conway sans drum kit plays a variety of percussion and the cajon on which he is seated with his hands only.

As usual the set list covers the now 50+ years of the band; starting with 'Walk Awhile' the Thompson/ Swarbrick composition from 1970 'Full House' album following up by the skiffle-like 'Shuffle and Go' which has been played live several times and will likely feature on the new album to be recorded later this year. We get a beautiful version of Sandy Denny's 'Fotheringay' Simon's vocal and guitar in this arrangement beautifully fitting the mood of the song. Another track which fits the acoustic vibe is the song of lost love across the Atlantic 'My Love Is In America' and a personal favourite.

Continuing the relaxed/ jokey mood Simon introduces 'Jewel In the Crown' as a track “we recorded in ...96, no not 1896” and 'Hawkwood's Army' written about Lord Hawkwood's mercenaries after the hundred year war, which actually lasted for 116 years.. “a lot like Brexit” quips bassist Dave Pegg. During the mid-set break most of the band are mingling with the audience catching up with old friends, returning to the stage to draw the raffle from which once again I failed to win anything.

The Spring tour allows for different arrangements of songs in which Ric Sanders' fiddle provides flourishes and fills during the tracks; and super-talented Chris Leslie who appears to be able to play virtually any instrument adding penny whistles, harmonica and recorder parts to 'Honour and Praise', 'Crazy Man Michael' and 'The Deserter'. Ric and Chris play a beautiful fiddle duet 'Jonah's Oak' which commemorates the memorial oak in the field where Fairport's Cropredy Convention festival takes place each August.

Another new track is 'Moondust and Solitude' written as Chris explains about the loneliest man in the World, Michael Collins, as he piloted Apollo11 around the far side of the Moon. Those of us who have seen Fairport many times will know how the end of the live set plays out, which in this arrangement means that 'Matty Groves' is given a percussion intro from Gerry. The band 'leave' the stage for the encore (actually remain seated hidden behind various instruments) which is of course 'Meet On The Ledge' which gets the most enthusiastic audience sing-along, and shows that there's still a lot of love for Fairport. Maybe see you in a field in Oxfordshire in August to sing it when “it all comes around again” ? 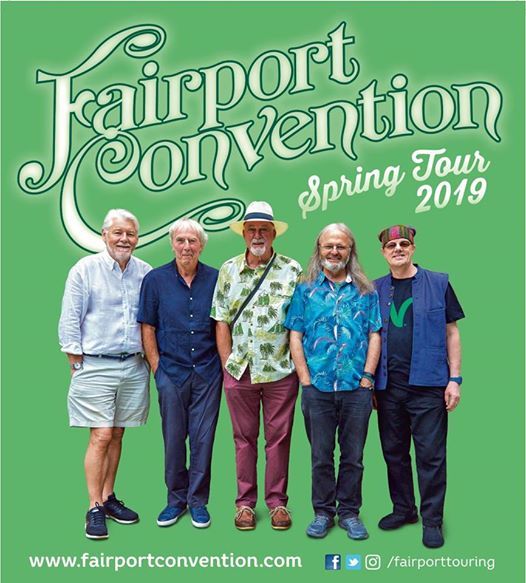