Some background first. Important context needed. Built in the late 1950’s in response to Sheffield’s chronic social housing issues, which in turn resulted from the need for back-to-back tenement house clearance post WW2, Park Hill has dominated Sheffield’s skyline ever since. It’s a monolithic structure (afforded Grade II listed status in 1998) after the ‘Brutalism’ style French architect Le Corbusier, under the supervision of John Lewis Womersley (never knowingly under built?) containing 1,160 dwellings across 4 high rise blocks – it was the biggest social housing estate in Europe at that time. Got it. But what do Sheffielders think of it?

It’s terrible – it’s an example of urban decay through unemployment and steel/coal decline, the shocking anti-social behaviour in the 1980’s and now a gentrified example of modern housing to the exclusion of social housing all in a dull, grey, concrete eyesore. And there’s the rub. Regardless of your view though, there’s one universal truth we can all agree on and that’s the past and present humanity within Park Hill over the years and it’s that generational humanity, that is the basis of this play/musical.

Written by Chris Bush, ‘Standing At The Sky’s Edge’ covers the lives and events of 3 families across 3 timelines from 1960 to the present day at Park Hill.

The looming stage set (designed by Ben Stones) is a two-storey replica of Park Hill, the main stage being a floor plan design of the basic shell/kitchen (all in concrete grey), the upper floor the balustrade/street in the sky (grey concrete – get the theme?) and where the band/musicians perform as well as the cast on occasion/for visual effect.

Now. I’m sure at this stage you’re asking “all this is fine – but what about the music, it’s a musical for crying out loud”.

Got it. Born and bred iconic Sheffield musician, (solo artist now, but was with Pulp and the under-rated Longpigs) Richard Hawley’s exceptional music is perfectly suited in reflecting the mood, tone, energy and humanity within the play. And if anyone is qualified to connect with Park Hill, it’s him.

Now, I’m usually of the mind that most songs in musicals are shoe-horned in to fit the plot, but that’s certainly not the case here. Two reasons why.

Firstly, you can’t level that charge against a man whose seven studio albums to date have Sheffield landmarks or references in their titles. That’s commitment and focus.

Secondly, Hawley’s songs have always carried an impressive emotional heft, with – on occasion – that hint of danger and menace that is a clear representation of his Sheffield roots. It’s as though he’s soaked up ‘Sheffield’ through osmosis and transferred those feelings into his songs over the years.

The musical pieces are perfectly attuned to the story, and significantly add to the individual and communal emotions – it’s that humanity vibe clearly shining through.

The opening song “As The Dawn Breaks” neatly captures the initial hope and aspiration Park Hill generated for it’s new tenants, being either the council house re-location from slum dwellings, overseas (Guinean/Liberian) immigrant intake running from civil war, or the new-era millennial professional starting over from a relationship break up.

“As the dawn breaks/over roof slates/hope hung on every washing line” sing the cast. “In the morning search for meaning/I hear a songbird’s melody/And she’s singing just for me”. This lyrical direction shapes the development of the play through a haunting ‘Lady Solitude’ [Alex Young’s bitter/sweet rendition as the millennial yuppie is excellent], the classic “Tonight The Street’s Are Ours” and “Coles Corner”.

New song “My Little Treasure’s” [from the upcoming new album “Further”] is expertly handled by Darragh Cowley as he reaches a crossroads between steel-work unemployment and his need to protect his young family.

The play doesn’t forget the need for lightness of touch either. From new jokes (‘just because you’ve polished some concrete and had one series of Dr. Who doesn’t mean you’ve got it all) to old favourites (Wife: He loves Sheffield Wednesday more than me Husband: I love Sheffield United more than you!).

However the real powerhouse musical performances that are key to the play’s development come in three parts at the mid-point of the show.

First. Maimuna Memon as Nikki (the cause of the relationship break up/move for Alex Young’s character Poppy to Sheffield) delivers a blistering ‘Open Up Your Door’ that sums up the emotional turmoil Poppy’s undergoing. “Open up your door/I can’t hear your voice no more/I just want to make you smile/Maybe stay with you awhile”. This song alone changes the whole mood and tone.

Second. “There’s a Storm A’Comin’”, kick started by the exceptional Faith Omole as Joy, developing into a cast performance which perfectly sums up Sheffield’s agonising decline towards steelwork closure and – in the late 80’s – the destruction of the coal mining industry and the resultant despair of large scale unemployment. “There’s a storm a’comin’/Goodbye to the sun/You’d better run boy run”

This section of the piece is followed by stage anarchy, representative of the ASB urban decay and nihilism reflective of Park Hill in the 80’s and 90’s. The mezzanine stage set is used to good effect as fights break out, rubbish bins are emptied below, TV’s and mattresses thrown from the roof . It’s an impressive section, which neatly sets up the third pivotal set piece post interval.

Third. The sinisterly lit cleared stage works perfectly for some 30 cast members to deliver a brooding, menacing ‘Standing At The Sky’s Edge’, where Hawley’s lyrics provide the pivotal choices facing the characters. “He was standing at the sky’s edge/And out there who knows what he’s thinking/He was sliding down the razor’s edge/and watched his life slowly sinking/Away/Away”. Hat’s off here to to the band who really rock out – Neil Brocks’ blistering guitar solo is especially impressive.

Running the gamut of relationships, life, death (“Our Darkness’), hope, love, (“For Your Lover Give Some Time”) despair, aspiration and finally resolution, reconciliation, (“Not Lonely – a fantastic performance by Rachael Wooding) redemption (“After The Rain”) and enlightenment (“Don’t Get Hung Up In Your Soul”) the story draws together the threads of the characters overlapping stories expertly (in summary: moving on, reconciliation) before a closing reprise of “As The Dawn Breaks” and that emotive lyric “I hear a songbird’s melody/And she’s singing just for me”.

Chris Bush’s stated intention was “We’ve been talking about this project as less of a traditional book musical, and more of a play and a gig that happen at the same time”.

I’d argue against that, as the two elements work seamlessly and in symbiotic association, but I see where she’s coming from – and at no point is one piece diluted at the expense of the other. Both music and play have innate strength both together and in their own right.

Conclusion? I saw it twice and thought it superb, both in terms of the play itself, the acting, the sweeping, powerful, emotive music of Richard Hawley plus the spot on representation of Park Hill as a community, and therefore by definition, of humanity.

I spoke with Richard Hawley afterwards (Hold on. That sounds hugely pretentious doesn’t it? In fact, my wife spotted him having a crafty ciggie outside the stage door on the way home and told me to go and say hello). I said how very proud he should be of the production. Expecting him to say “Thanks pal”, I was surprised by this reply:-

“ It was hard work, took a long, long time [said wistfully]. I know Park Hill – went out with a girl on the top floor. My drummer lived there – in fact another drummer I know lived there. Must be a drummer thing. My mate lived there too, and he was very bitter about what it had become – all done up, but through this work he said he’s changed his mind now. So I’m happy to have done this just for him”

Park Hill resident 2015 onwards with my wife and daughter

Sheffield Theatre arranged for interviews to get the stories of the People of Park Hill. They recorded past and present residents as well as neighbours of Park Hill to get their stories. There are 13 interviews in all via the Soundcloud, all of which are worth listening to.

I’d thoroughly recommend No.3 Neil and John, which is a hilarious walk through estate life in the 70’s, full of genuine and poignant stories that are laugh out loud funny
I’d also highly recommend No. 10 Claire, who provides a modern view of a family who have made Sheffield their adopted home, and their daughter a permanent one.
Why? Well, she’s my wife. 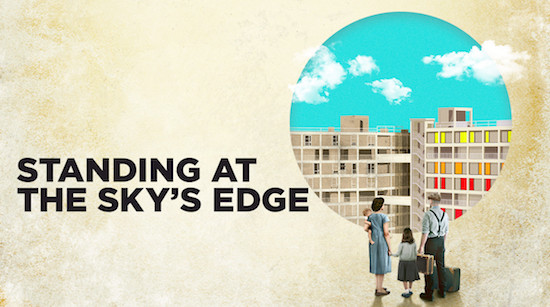