Usually the opening band's set sees the bars full, the merch stalls doing good business and a relatively unknown band playing to a half-full hall containing a half-interested audience. Tonight there's something different as the support band James have chosen for the UK shows on their 'Living In Extraordinary Times' tour is.....James.

James are playing two sets each night, the first branded as James acoustic (all eight band members are plugged in) for a chilled, lazy Sunday morning, piano lounge bar style version of half a dozen tracks. After a false start involving a faulty ear piece and a spot of undignified roadie fumbling around Tim Booth's rear to much amusement in the band, James open appropriately with 'Hello'; 'Backwards Glances', 'Pressure' On' and 'Broken By The Hurt' are all played and deserve respect for trying a different approach but somehow these versions lack the joy James' songs have usually. The acoustic set really works when they strip down to a four piece of two guitars, drums and Tim's vocals for 'Feels Like Fred Astaire' giving a skiffle feel to the best track in the opening set.

“Good Evening. The support band were shit” says Tim Booth as the non-acoustic set starts with the pounding, martial drumming of 'Hank' first track on the new album the whole hall is bathed in red lights and the band in silhouette. The impressive light show continues for 'What's It All About' as the stage is flooded with smoke and pulsing, swirling lights and strobes. 'Ring The Bells' gets the stalls out of their seats for a dance. 'Heads' from the new album has a frantic rave percussion feel which matches Tim's impromptu style of dancing.

Tim's first of two audience walkabouts which occurs during 'Extraordinary Times' sees him balancing on seats a feat which must be considerably more difficult compared with a usual crowd-surf. Afterwards he comments that he's one of the few people who have insurance for stage diving and during a recent conversation with the James fan at the insurers Tim confirmed that he's still insured under “being passed around” presumably to reduce the premiums.

During the wonderful 'Getting Away With It (All Messed Up)' Tim changes the lyrics to “Are you aching for the grave? That's OK. I'm insured”. 'Laid' echoes the slow tempo approach of the opening band set during the first verse until the familiar rat-a-tat-tat drum part kicks the tempo back up and the track builds into a big finish to the main set.

The two track encore starts with 'Many Faces' from 'Living in Extraordinary Times' which Tim says describes what James is all about “There's only love that's strong enough. To rescue us from self-destruct”. The song was written as a result of Mr Trump's much promised but still yet to be built wall and about half way through the track the lights change, the band now in silhouette only, motionless as the audience take the chorus for about 3 minutes “There's only one/ Human race. Many faces/Everybody belongs here.” for a genuinely moving, heart in the mouth moment that's certain to a be highlight of many James' sets for years to come.

Tim picks up the megaphone for the intro to 'Sound'; not to be left out in the audience walkabouts trumpeter Andy Diagram appears on balcony stage right to the shock of those around him to take the trumpet solo as the band play on stage below.

They may have reduced the bar and merch takings for the night, but that's a small sacrifice for this warm, wonderful and uplifting evening in the company of James, and their support band. 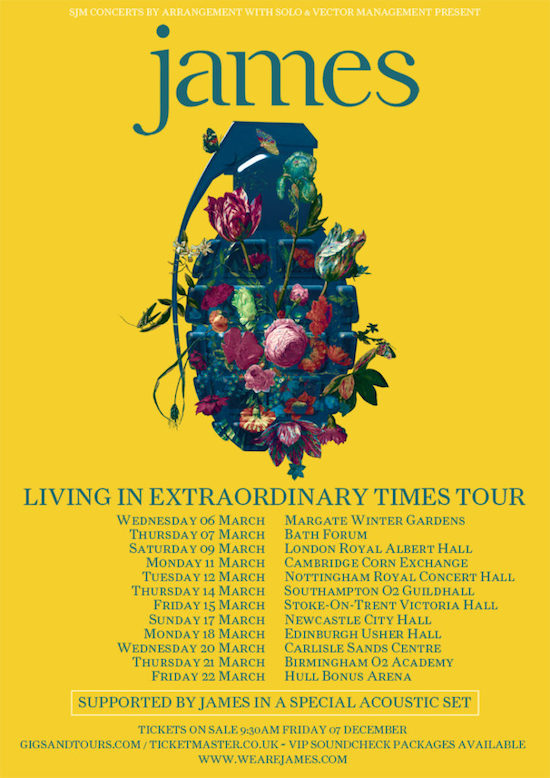