Liberty Hall is a 400 seater theatre inside the Siptu trade union building on Dublin's Eden Quay. The Siptu building used to be the tallest building in the city and remains an iconic landmark. Every now and then the venue pops up in gig listings and on 23 February it played host to Lisa O'Neill and band, with support from John Francis.

I first came across Lisa O'Neill when she supported the great Joe Pug at Whelans a few years back, and it was immediately apparent that this was a unique artist: A great storyteller with a distinctive voice, really original songs and a no nonsense stage presence. Lisa is currently on her fourth album, which was released through Rough Trade, the label most famously associated with the Smiths, who also have folk acts Lankum and Josienne Clarke & Ben Walker on their books. It is a label that guarantees quality, like Proper, Real World and Nonesuch; organisations with heart, which we should cherish in this day and age.

Support came from John Francis, a singer and multi-instrumentalist from Dublin. John played banjo (sparingly and beautifully), guitar and two tin whistles simultaneously, which produced a kind of Andean sound! John was checking the setlist on an iPad and sipping from a glass of red wine, joking that he felt like the Gloaming. John's real name is John Flynn, but as there are too many of them he now performs as John Francis. He is currently working on an album.

Lisa O'Neill walked on stage accompanied by box player extraordinaire Cormac Begley. A real joy to get the opportunity to hear them play together. I would go as far to say that Cormac is to the concertina what Martin Hayes is to the fiddle. His playing is unadorned and incredibly beautiful. Cormac then made way for Lisa's regular two man band, but guested again later on in the show. A backing singer, a very tall girl with a Scandinavian-sounding name, also joined for a few songs. Her high and mellow voice blended really nicely with Lisa's lower, grittier one.

'Pothole in the sky' is a song Lisa wrote about a parachute jump she did. She talked about this in the introduction and described this experience so vividly you can really imagine what it must have been like. One of Lisa's standout songs is 'Rock the machine', a song about Dublin dockers losing their job's as machines replaced people in that industry. Lisa commented on the fact that we were situated right on the Liffey that night. Check out the powerful video for this song.

Another highlight was 'Lullaby of London', which contains the line “Heard a long gone song”, which is the title of Lisa's latest album. This was indeed a long gone song for me that I used to love and then forgot about. It is a beautiful song by Shane MacGowan that the Pogues released on 'If I should fall from grace with God', which I had on vinyl. It was through the Pogues and the Waterboys that I first got into Irish music, which ultimately led to me moving here from the Netherlands. I only had a CD player once I moved to Ireland and had not heard the song for years. Thank you Lisa for bringing it back!

The song 'Violet Gibson' is about a Dublin woman who tried to assassinate Mussolini, a story I was unfamiliar with. This was one of a few occasions when some drunk audience members started shouting things and wanting to make themselves heard, possibly the result of the competitively priced pints of Guinness sold at the Liberty Hall Theatre bar (for the hungry there was a table with Mars bars and KitKats). Lisa ignored the interruptions and got on with the show, which ended with a cover of 'Blue Moon' and a final song with all five musicians together on stage.

Lisa O'Neill will be touring around Ireland in May and June. She will also play at Larmer Tree, Cambridge Folk Festival, Sidmouth Folk Festival and the End Of The Road festival during the summer. 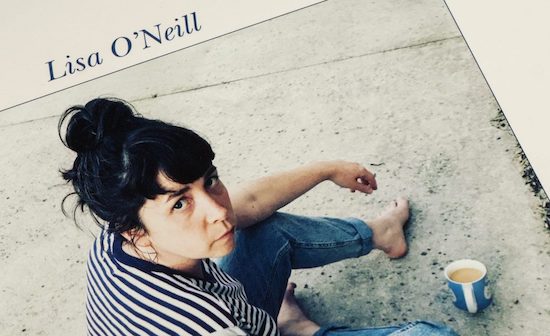