A quick check on my CD shelves (yes that shows my age) reminds me that I bought The Joy Formidable debut E.P 'A Balloon Called Moaning' in a poster bag packaging 10 years ago from the band who were working their own merch stall that night. The 2019 merch stall is an impressive cornucopia of T-shirts, music, towels, badges, earplugs, stuffed toys and what appears to be a signed drum stool seat, alongside their most recent album 'Aaarth' released last September and which is the reason we are in Nottingham tonight.

Tonight's opener 'Y Bluen Eira' with it's pounding drums and chanting sounds sounds like it's used to summon demons from the Welsh Underworld. The impressive light show really kicks in for 'I Don't Want To See You Like That' the searchlights on top of the amps rolling around the inside of the Rescue Rooms picking out the monster riffs and drums coming off the stage.

Far stage right is drummer/Duracell bunny/octopus (it's the only way he could keep all those cymbals moving all night) Matt Thomas, which gives plenty of space for bass player Rhydian Davies and guitarist / lead singer Ritzy Bryan and her striking white and gold Fender Strat to dart, spin and weave around each other. The mosh down the front is sparked into life by the opening chords of early single 'Cradle', the frantic pace continues with 'The Wrong Side' which sees Ritzy throwing guitar hero shapes and a brilliant 'This Ladder Is Ours'.

The tempo slows for 'Under the Petal' Rhydian and Ritzy on acoustic guitar and Matt beating out the rhythm on a box under his drum stool. The heavy drums and riffs return for 'Go Loving' and the Arabic melodies of 'Cicada (Land on Your Back)' both from 'Aaarth'. The green searchlights wash the ceiling to the air-horn intro to the epic 'The Greatest Light Is The Greatest Shade'; as the track builds to its climatic ending Ritzy and Rhydian duetting on the big finish “You're the greatest light, the greatest shade which means that I can be happy for you , happy for you ..... happy for you”.

The epic theme continues through the three track encore. A huge 'The Everchanging Spectrum of A Lie' , 'Y Garreg Ateb' from their split single series Arthurol and the towering 'Whirring ' (minus microwaveable popcorn – don't ask you had to be there) which sees Rhydian and Ritzy charging around the stage and play-fighting during the big thrash out ending with guitars and basses pushed into amps, effects peddles tweaked and cymbals crashing. All of which reminds you that even ten years after their first E.P The Joy Formidable are still a wonderful band. 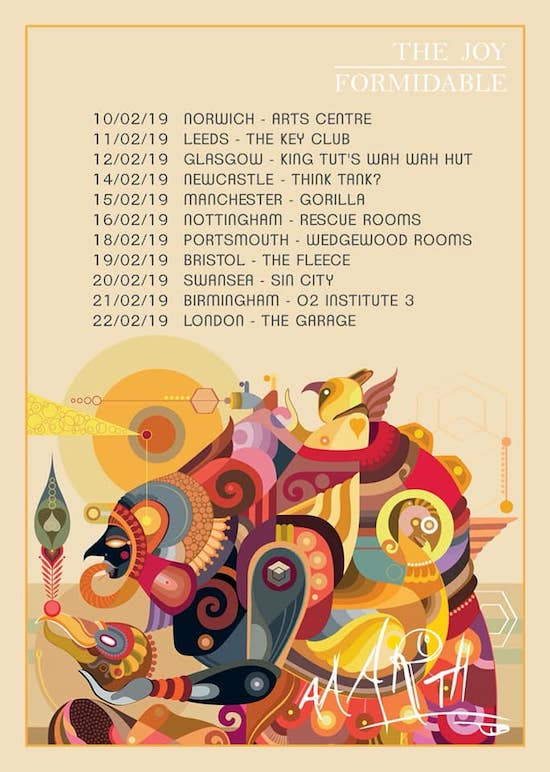