A bumpy flight over the Irish Sea for tonight's gig at Elmwood Hall a beautiful former Presbyterian church with its decorative ceilings and classical columns which is now associated with Queen's University.

Support tonight is from Dublin five piece Silverbacks who do their rocking Fall-Teleman-Joy Division thing to great effect, single 'Just In the Band' was a Steve Lamacq recommends in December '18 and debut album scheduled for release later this year.

Tonight is the launch date of Varshons 2 a second album of covers although the set played tonight picks heavily from The Lemonheads material, which from an informal age survey would be the reason the majority of the audience are here tonight.

This version of the band sees Evan Dando accompanied by Chris Brokaw on lead guitar with a two piece rhythm section of bass and drums starting with The Lemonheads tracks 'Hospital', 'Turnpike Down' and 'Great Big No'. Evan sporting the “just fallen out of bed” , Neil Young lumberjack check shirt look doesn't engage much with the audience and sings half looking at the ceiling, but this doesn't stop audience singing to 'It's a Shame About Ray' and 'Confetti'.

The rhythm sections departs leaving Chris and Evan to play a mini set of Lemonheads and Varshons tracks as a guitar two piece .Its good to see them acknowledging local musical history with covers of Stiff Little Fingers 'Alternative Ulster' and The Undertones 'Teenage Kicks', and although Evan apologises that they didn't have much time to practice both go down an absolute storm. It'll be interesting to see if the nod to the local music scene continues throughout the remainder of the tour.

As Evan said “We'll play some of the slower stuff, it suits this hall” we get the Lemonheads 'Being Around', 'The Outdoor Type' (a Smudge cover which appeared on the Lemonheads Car,Button,Cloth album) and 'To Love Somebody' by The Bee Gees.

The rhythm boys return for 'Big Gay Heart' ,'My Drug Buddy' and happily my favourite Lemonheads track 'If I Could Talk I'd Tell You' still with its whistling solo, then Evan goes solo and unplugged for 'Alison's Starting To Happen'.

Encore of 'Into Your Arms' and 'Bit Part' which really misses Juliana Hatfield's shouty intro and it's the end of the show. The memories of Radio 1's Lamacq/ Jo Whiley fronted Evening Session flooding back for an evening of nostalgic sing along to some of the best tunes of that decade.

Whilst Evan may no longer be worshipped as the 90's poster boy he once was, the congregation in this former church still rightly showed deference for songs and melodies this good and will do for a long time yet.

Varshons 2 is out now and the UK tour continues until February 19th. 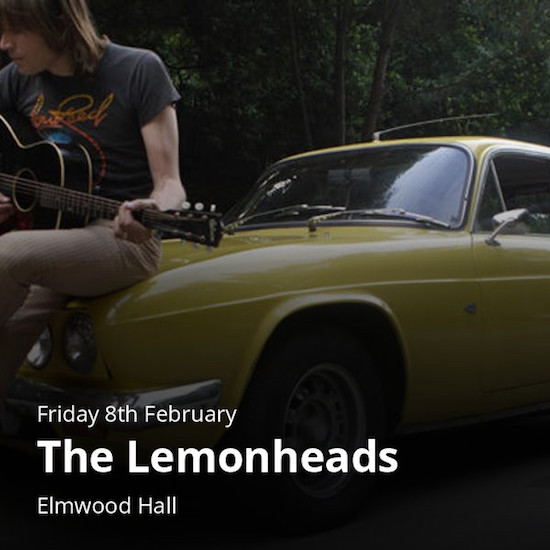