Playing the large concrete and steel boxes where your audience can't see the whites of your eyes presents a problem for musicians, how do you make the show something special for them ? Do you play in the middle of the arena, have a little stage for those close up and personal numbers, fly giant inflatables above the crowd, or turn the whole thing into a piece of choreographed performance art? Guess which option David Byrne has selected?

In a throwback to Talking Heads brilliant 'Stop Making Sense' performance, the stage at the start of tonight is bare except for a chair and table with a model of a brain on it. David Byrne, his suit as grey as his hair, appears seated at the table using the brain to illustrate 'Here' from his superb 'America Utopia' album,“Here is a region of abundant details/ Here is a region that is seldom used/ Here is a region that continues living/ Even when the other sections are removed”.

The other members of the eleven piece band (apparently aware of his current location David jokingly introduces three of them as “Friar Tuck, Little John and Maid Marion”) who are all dressed the same as Mr Byrne in grey suits and barefoot, emerge through the chain curtain which covers three sides of a stage that has not a single monitor, amp, cable or set list duck-tapped to the floor. If an instrument can't be carried it's not played tonight which adds a totally unique feel to the whole performance and crucially adds complete freedom of movement. The whole show is a whirlwind of carefully considered, choreography as the band members move amongst and around each other whilst amazingly playing percussion full versions of each track.

The set list takes big chunks from 'American Utopia' including 'Dog's Mind', 'I Dance Like This', 'Bullet', 'Every Day Is A Miracle' and 'Everybody's Coming To My House' along with tracks from the whole of David's career. There are the collaborations with Fatboy Slim & Dizzy Rascal and St.Vincent, solo work 'Lazy' and 'Like Humans Do' but it's the Talking Heads tracks that get the audience up and dancing.

The funky, percussion filled 'I Zimbra' and 'Slippery People', 'Once In A Lifetime' sees David dramatically swaying and staggering across the stage. The simple use of a spotlight during 'Blind' throws enormous band silhouettes onto the surrounding curtain and of course 'Burning Down The House' gets the audience out of their seats dancing until the end of the main set.

Encores of 'The Great Curve' and 'Road to Nowhere' which features some mighty impressive choreography with the band circling backwards whilst playing the song. The end of the song is greeted by a standing ovation from the audience not overawed by technology but by the emotion, drama and movement of this stunning and special performance; Like Humans Do. 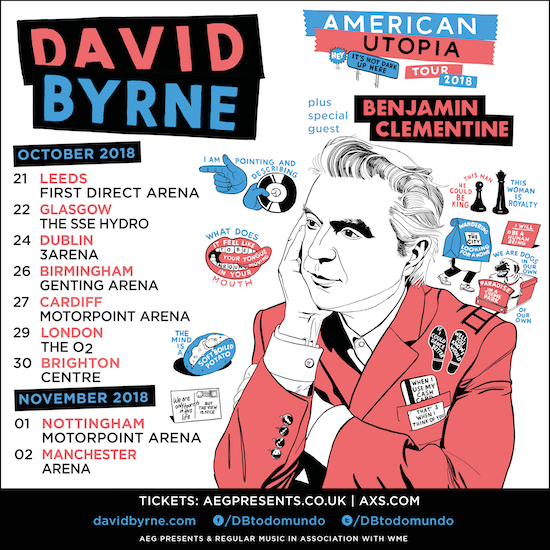