It is a strange thing, being a music lover from the Netherlands. My country has great appreciation for music: Touring bands find a loyal following; there are nice specialist record shops dotted around the country. But music ‘Made in Holland’?

There is ‘Venus’ by Shocking Blue and George Baker’s ‘Little Green Bag’. I believe we have dance DJs who are internationally known and of course André Rieu is very successful. But rock? We had Focus and Flairck, Herman Brood was an icon and we are proud of Adje Vandenberg and Candy Dulfer, but in the long run (and we are talking a very long run here!) there is really only one name that matters: Golden Earring.

These are true rock’n roll survivors. The band was founded by George Kooymans and Rinus Gerritsen in the Hague in 1961. Singer Barry Hay joined in 1967, and drummer Cesar Zuiderwijk has been on board since 1970. The line up has remained unchanged since and there have been no hiatuses. This makes them the longest running band in the world, beating even the Rolling Stones. I had never seen them live before.

Golden Earring concerts sell out quickly, which was why we ended up in Tilburg; a show which took slightly longer to sell out. Poppodium 013 is a purpose-built 3000 cap venue. Support came from girl band Luminize; a four-piece, sounding a bit like the Bangles or Four Non Blondes. By the time the Earring was about to start the venue was packed. I am not a fan of Dutch audiences. The number of chatterers and folks absorbed into their phones is often higher than in European counterparts. A group of fairly drunk older attendees asked my sister, who was on crutches, to move so that they could all stand together - like kids in kindergarten... We stayed put. Thankfully the music was loud enough to drown out the compulsive talking.

A look at the Golden Earring discography shows that the band have been releasing new music steadily throughout their career. Their biggest international hits were ‘Radar Love’ and ‘Twilight Zone’. In the 1980s they were pioneers as a Dutch band that had videos on MTV, although a search on YouTube will reveal some delightful hippy-ish videos the guys did back in the late 60s/early 70s (check out clips for ‘She Flies On Strange Wings’, ‘Back Home’, ‘Sound Of The Screaming Day’).

In the 1990s they went the unplugged route, which resulted in a number of acoustic albums and theatre tours. The band celebrated their 50th anniversary in 2011 and basically have just kept doing what they are good at. Three of the guys are 70 years old now. Bassist Rinus is 72. They do not look it. Throughout the gig I kept thinking, “Just how cool is Barry Hay?!” This man is older than Bruce Springsteen. I recommend his authorised biography, ‘Hay’ (by Sander Donkers, published by Lebowski Amsterdam, 2016).

The concert in Tilburg had songs that spanned their entire catalogue, with oldie ‘Another 45 Miles’ sounding especially wonderful. The hits kept coming: ‘Long Blonde Animal’, ‘When The Lady Smiles’ and a personal favourite, ‘Quiet Eyes’. The latter was in what Barry Hay described as “Het Facebook/Instagram blokje” (the Facebook/Instagram section). As a gesture to multiple gig-goers the band allow fans to request some more obscure tracks.

‘Twilight Zone’ was an early highlight. I had been forewarned about the extended version of ‘Radar Love’ the band favours (“You can go home, have a power nap and come back”, one friend said). This is not a new phenomenon. In his highly amusing book ‘Rock Stars Stole My Life’ English journalist Mark Ellen writes about seeing the Earring in the 70s, and mentioning the drum solo in particular, concluding that it is possibly ongoing still. As it happened I enjoyed the rendition. The bass solo was good. Drum solos I do not like - full stop - but I have endured worse.

Something that stood out was how well George and Barry harmonise. They have very differing voices, and it sounds great when they sing together. George is a great guitarist too, which I wasn’t so aware of until I started delving into their music recently. The band have their own Bobby Keys in saxophone player Bertus Borgers, who joined them on a number of tracks.

The show closed with another smash hit, ‘The Devil Made Me Do It’. I would have liked the gig to be longer, but then I nearly always feel that way. I must note that the Stones concert I was at in spring was longer... I was disappointed that Barry did not play the flute, but no further complaints.

The band do not tour abroad these days, so if you ever get the chance to catch the Golden Earring on their home turf - do not miss them! In a year where my gigging highlights included the aforementioned Rolling Stones as well as Patti Smith and John Cale, I am pleased to add the Golden Earring.
70 is the new 30! 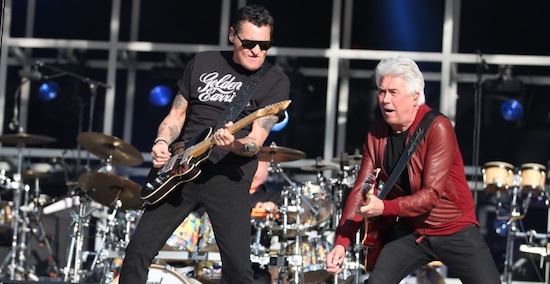