How's life as a musician treating you today?

Kati: Great! We are really excited about the release of our new LP "You Want it Real."
Britt: Busy! We are all working on multiple projects, booking tours, putting out albums and writing. On top of lié, Ash has Minimal Violence, Kati has Dust Blaster, as well as SBDC, and I have SIGSALY.

Your new album is just out, (You Want It Real), how would you compare this record to your previous releases?

Ash: I'm really excited about this release, we had a chance to experiment more with song progression and structure, and recording wise in some ways I feel like this is the closest we've come to capturing the intensity of our live sound. Also the first time we've ever written a song in the studio!

Britt: This record is a well balanced representation of the lié sound. We explored different kinds of melody, lyric writing, and recording style which produced some songs that I really love. Recording with Jesse Gander at Rain City Records was one of the best recording experiences for me. He nailed our sound. It's loud, present, but gritty and has that live feel. ...I think this record could be "the one"...

Where does your sound come from, what music influenced you?

Ash: Some of my influences are angular, dark bands like Sonic Youth, Au Pairs, Wipers.

Britt: My influences are always evolving, but for this record I would echo Ash and then add Limp Wrist, Institute, and Pissed Jeans. During the writing process, I was also listening to a lot of Pelada and Marie Davidson so that may be in there somewhere...maybe SPIRITUALLY.

Your three main records to date all come in around the twenty minutes mark in length. To someone from the Seventies, that’s an EP .... Why the magic 20 minutes for you?

Kati: 20 minutes has always fit our song writing style. At first I was worried about not fitting the mold, but now I have realized that this is just part of making the music we want to make.

Where did you play your first gig as a band and your last gig?

Britt: First gig was a fundraiser to send my PDP (teacher training) class to Haida Gwaii to do work with the community. It was at the Railway Club (RIP).
Ash: The last gig we played was in a boxing ring!

Do you think current trends of streaming, merch and touring makes music a viable career or does music always have to be supplemented with day jobs?

Ash: Punk music will never pay the bills....unfortunately. But if it did would it still be punk?

What is your favourite story from life on the road so far?

Kati: My 30th birthday night playing a crazy house party in Long Beach, CA that the cops came to then sleeping in the seediest motel in the world but waking up to the sunshine and mimosas near the beach in the morning!

Britt: France, apartment party, kids crowd surfing on a mattress through the tiny hallways, smashed my lip with the mic from moshing, woke up sleeping in a fur coat on the floor, nearly fell in love with a beautiful French boy who shared a cigarette with me on the deck in the crisp morning...

What are your favourite radio shows?

Kati: Dekmantel Podcast and Resident Advisor Podcast
Ash: Cera Khin on Noods and Sofie K on NTS, also been really into these 400hz soundscape mixes on youtube that block out my tinnitus!
Britt: Resident Advisor, Democracy Now, Last Podcast on the Left and Headspace

What was the first album you brought and where from?

Kati: I remember buying Beastie Boys “Cooky Puss” EP at Silver Platters by Northgate Mall in Seattle.
Ash: The first record I remember buying was a TV Ghost record that I ordered from In The Red records.
Britt: Damaged by Black Flag at a pawn shop in White Rock.

If you could choose to tour with any other current band or artist, who would that be and why?

Kati: The list is long but if Boy Harsher wanted to tour together, I would offer my first born.
Ash: Giant Swan! They have so much energy live, more than most punk bands tbh, also always want to push the intersection of punk and techno.
Britt: The Distillers because Brody is a long time hero of ours. 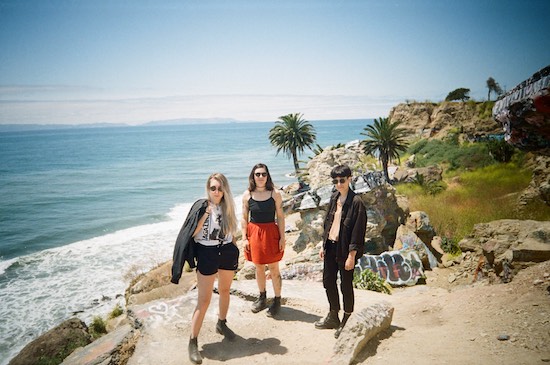