Formed just last year, how did the band come together?

The band was formed, conceptually at least, around 6 months before the full line up started rehearsing. The idea was to form a band with a strict set of parameters ie. one single guitar and bass sound, minimal equipment etc, perhaps as a rejection of the trend for overcompensation with effects and electronics in current music, but also as a statement of quality over quantity. We try to project tasteful minimalism and high intensity, not to be confused with brash simplicity. Songs were written, rehearsal were undertaken and everything from then on has fallen into place almost effortlessly. The highest demand on us as musicians is probably physically, it's very physical music to perform.

How would you describe your sound for us listeners?

Our sound has various influences, many of which are not musical at all. We have a huge interest in subculture; various cultural and sartorial influences from these bleed into the band and are very important. Musically, our sound borrows from the simplicity and intensity of punk, but also from the relentless, pounding rhythm of mid 1970s disco and funk. Although one influence may be more audible than the other, it takes that juxtaposition to create our sound. We've nicknamed it, for want of a better phrase, "Obtuse Punk", but hopefully people can decide for themselves.

Now you have a single ready, what are your next recording plans?

We'd like to have an E.P ready for June/July, perhaps earlier. We have quite a few songs in waiting, and we record/mix/produce everything ourselves, so that aspect isn't difficult it's more to do with time, which we don't have enough of!

Why did you choose rock n’ roll for a career .... presumably there are still day jobs?

I'm not sure if we did choose rock 'n' roll as a career, we don't really see ourselves as either rock 'n' roll or this as a career. It's more so something which is almost bordering on a lifestyle choice. You're right about day jobs, unfortunately in this day and age music doesn't pay. There's only one reason to do something like this, and that's for the desire to want to project and perform what you want to play and say. Of course we want to reach a wide audience, but only an audience that is really listening. We're not here to win favour.

What could your audience expect from a live show by the band and how do you hope they feel after the gig?

I think they can expect a intense, relentless and anxiety inducing show. We give everything, anything, we can to the shows and I think that comes across. I'm hoping that audiences leave the shows feeling the way we do; elated but physically and mentally exhausted.

What was the first album you brought and where from?

Tough one... It probably would have been a Blur album, the self-titled one. They really were the most exciting and experimental pop band around when I was growing up.

If you could tour with any current band or artist, who would that be and why?

Another tough question... we tend to work in isolation, so we can fully concentrate on what we are doing. Therefore, we don't see/hear many current acts. However, there are a few bands that we currently enjoy, such as Revenue, Casual Sect, Those Unfortunates and ES. And maybe a handful of others. Those groups are playing with us for our single launches, they seem to fit and they're all really exciting to watch.

What one piece of advice could you offer to people just thinking about forming a band?

If you're not doing it for yourself, forget it. If you want to earn money or have a life career, go and work in a bank or get a steady job and work hard. Or anything else. This country does not support artists anymore, so the only real reason to spend all your free time and money in a small, sweaty rehearsal room with a bunch of other people you'll row with about over nothing is for the love of what you do. 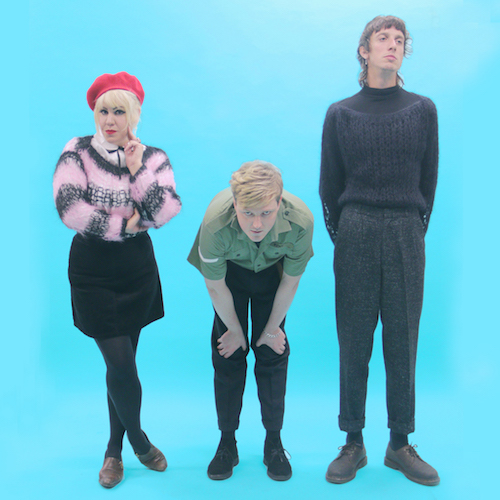