How is life in Salt Lake City treating you today?

Rebecca: Well, I am actually in London right now, for work, but London is treating me great! ☺

New album done and dusted, tour planned, exciting times ahead for the band?

Levi: I personally am very excited for our future. We have already done some amazing things, but what we have in the works is even better.

Rebecca: It does feel like we have some exciting things coming up. A US and European tour, and some surprises in the works. I’m very glad the album is done and ready to be released. It has been done, for us, for six months now, so it almost feels old to us now. ☺

'For This We Fought the Battle of Ages' is the album title .... Was it that difficult to complete the project?

Rebecca: Hahaha. Actually .... yes. The process of putting the album together fits the album title perfectly. We all went through a lot, individually, over the last year before the album was recorded. I also had really bad bouts of writing block; that’s why it took almost a year to write the basic songs. The writing block was worse than the last album, or maybe we’ve become more picky, I don’t know. Once the basic songs were done and I presented them to the band with initial structures, then the process of rewriting, rearranging, polishing transitions, and final structuring began.

What was the ambition of the band entering the studio this time around and how did studio time differ for this album as against your other albums?

Rebecca: Well, everything with this album seemed more arduous than the last album, except the recording itself and the mixing. That only took three weeks, because we were all much more prepared than with More Constant than the Gods. I think More Constant took two to three months to record and mix. That’s why we labored so much more to be prepared this time; so we would use our time more efficiently and just knock out the album quickly.

Andy was the producer of For This We Fought the Battle of Ages, and I think he did a fantastic job. He is a local producer as his full-time job, and has recorded several hundred local and regional albums. He is very talented, very patient and very good at what he does.

How did the current lineup of the band come together?

Rebecca: Sarah and I started out SubRosa together in 2005, and went through many lineup changes. Then Sarah went to Europe in 2008 for eight months, and Kim came on board as her fill-in. By the time Sarah came back, though, we realized you can never get too much of a good thing, and Kim stayed in the band with Sarah. Andy joined in 2012, about a year after No Help came out, and Levi joined about a year and a half after that, at the beginning of 2014.

What would you like the audience to experience at your live shows and how do you hope to attract new listeners?

Rebecca: We would like listeners to feel like they are going on a journey with us. We want to stab people in the hearts and leave them flayed and revealed.

I am not sure how to “attract new listeners” except by just playing to the best of our ability and giving our performances everything we have every night. Just by making people feel something as powerfully as we can. Beyond that, I don’t think we should need to try to apply pressure to get people to listen.

How is the music scene in America for Post Rock / Doom bands at present and how do you think audiences differ in Europe as compared to the States?

Rebecca: I think a big renaissance in underground metal in general, across all subgenres, is going on right now, in both the US and Europe. I think underground experimental/ambient black metal and blackened doom are especially going through some exciting times.

There is a lot of diversity within the doom scenes on both sides of the ocean, and it’s hard for me to say how they differ. But metal audiences in general are bigger in Europe. Metal is much more embraced, respected and appreciated as an art form in Europe, from a mainstream perspective. Metal is still a misunderstood and maligned movement in the US, I think.

Very big metal bands are accepted in the US mainstream, but if you ask the average person on the street in America if metal is a big movement in the United States, they would say no. If you asked them what is a current metal band that is making waves, they would have no idea (with the exception, maybe, of Tool).

In Europe, I get the sense that you could ask someone on the street the same question and they would say that metal is a very big, very established movement in Europe, and could name several metal fests and maybe even a band or two who is respected, like Ulver, Enslaved, or Emperor. Not in the US. ☺

If you could choose to tour with any other current band, who would that be and why?

Levi: Old Man Gloom. I love their music and their live show.

Rebecca: Nick Cave, PJ Harvey, Thou and Corrupted are all very high up on the list. They are all just musicians I deeply admire and am in awe of. They all have integrity towards their craft and are true artists.

What were the records you listened to growing up, and through college and do they still get played today?

Rebecca: I started out pretty cool listening to Guns N’ Roses and Metallica in middle school, but then I veered into a no-man’s land of definitely uncool music territory until about age 16. Then I got back on track with the better bands of the grunge era. I still listen to and appreciate those bands on occasion. Probably my biggest influence was a sludge metal/rock band called Red Bennies, from Utah, who I first heard when I was 20. I still listen to old Red Bennies every three or four months or so.

One piece of advice for anyone starting out in this crazy business today?

Rebecca: I know it might seem clichéd to say, but you must be true to yourself and your music vision. The trappings of getting bigger or more well-known might seem alluring in the moment, but none of it matters in the end. What really matters is the craft itself, connecting with other people through music, and the joy and privilege of being able to play a role in creating something that never existed before you and will never exist after you. 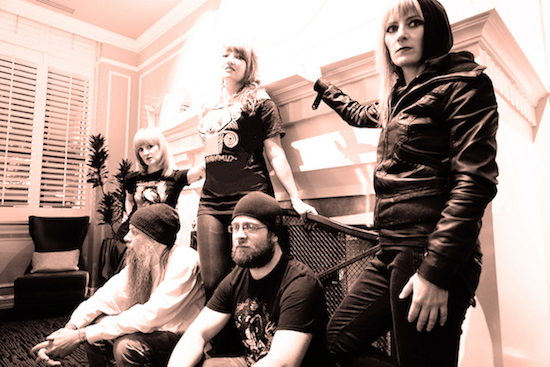 The band will tour the globe extensively in support of the new album; Europe/UK dates below: