It’s been 4 years since your debut album, and finally Palomino lands. Where have you been ?!

Its been annoying and we shouldn’t have spent so much time away, but a lot of it was out of our hands. Finance was an issue, we lost our management, the label weren’t committing, and we wanted to experiment with stuff so we took longer.

You have your own studio ?

Yeah, Sam owns part of one, so we get cheap rates !

How long did the whole process of writing and recording Palomino take ?

Maybe 2 years in total. We started writing then loads of stuff happened, so we went a bit off piste. I think Palomino has more twists and turns than the debut album. We experimented in new sounds and weird interludes, and having longer away benefited us in being able to do that.

So Jonathan Wilson produced the album..

Actually, he mixed the album after we asked him. He only took 2 weeks and mixed from live. Basically he takes 2 versions of each song, then old school mixes live. We weren’t actually present for the mixing process - that costs more money, so we just sent him the tapes.

Were you looking for the same mood from the first album ?

We wanted to expand and get deeper - we’re genuinely fun people but its sometimes easier to write intense deep songs. There was no plan, but we wanted to experiment and go more into space.

You are signed up to Loose. Was this a conscious decision ?

They took a punt with us on the first album, and it went really well, then they heard the stuff we were putting dow for Palomino and decided they wanted to get involved again. Its always an album by album basis. It’s good for both sides really, but Loose are really supportive of us.

What do you particularly want out of this business ?

For me it changes regularly. When I first saw Father John Misty, I thought I want to be like him. If we can get paid enough to not work, that would be great, but traveling the world with your best mates is pretty cool.. We travel the world doing music, and making music and thats a legacy someone can’t take away.

What’s next for Treetop Flyers ?

We want to record a lot sooner this time, and try and record in a different way. You have the ability to record yourself and at home, outside of the studio environment, and this is a quicker process. We may try and mix it up and evolve the sound again for the next album.

I thought Treetop Flyers were a folk-rock band until I heard Palomino.

That’s what we were aiming for. There’s a lot more to us than that. It’s louder, more groovy, soulful even. We may go even more off piste for the next record.

What’s your view on touring ? Love it or hate it ?

Generally like it. It can be stressful and long but if you have a really good gig that energy sails through for the next couple of days. Its always different and you learn from it. By the end of the tour you are that tight, you don’t want to stop. I suppose that’s why we do it.

Congratulations on the wonderful Palomino. Please tell me its not going to be 4 years until the next album ?

Definitely not, its too long. It’s all about momentum, and we want to keep it going. 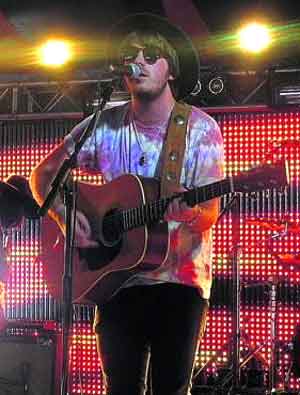