The band was formed in 2012, how did you all meet & start playing together?

I sat in Berlin, smoking a lot for a few months. Then my wife left for Israel and I didn't join her because I was terrified of flying at the time. That's when most of the first LP's songs came out, and that's when I sent them to Dan and Yuval in Israel. We started practicing when I came back from Germany in 2012.

I think it took about two years for us to understand who our friends are in the USA, and we have been working with them since. Burger Records, Austin Psych Fest, Windish Booking, have all but super important to our first steps. Israel isn't a very well-known country in the sense of exporting international indie acts, so it has been steady and slow. We record new music all the time and create video content we love. We tour in the US and now have plans in the UK. We are cool with working hard and with things being slow. As long as the partnerships are natural and real, it's cool and we enjoy it.

New Album, 'Sinking the Stone' is due for release in the UK on 25th September, what are the main differences to 2012's 'The World is Well'?

Sound wise we learned a bit better how to record ourselves. We do all the technical recording of the albums at home. Other than that, this new album is more lyrically direct. The first one had a more generic, sci-fi way about it. I think its part of process I'm going through of being more and more able to simply capture what I am feeling, rather than going a long way to explain it.

You sing your lyrics in Hebrew. Lots of bands choose to sing in English to make their music more widely accessible, why did you feel it was important to stick to your native tongue?

Self preservation, in the sense of me, remaining close to myself.

What music were you influenced by when progressing through college and do you still play the same albums today?

I loved music where I felt a regional feeling about it. Feelies felt mid-western in a wonderful way. Velvet Underground were very NYC. I like how northern music from the UK sounds northern, foggy, cold. When I approach making music it's always while thinking of history, geography, images.

Kind of a double meaning: It means both a committee in charge of dealing with irregular cases in any institution, and at the same time it means "group of misfits".

Is music your 24/7 career or do you all have other jobs as well?

Oh no. I'm (Juval) a publicist. Dan works in industry. Yuval is a video editor.

The new record is part on a trilogy, what comes next and when?

You have a UK tour booked for next month. Is this the first time you have been over to the UK on tour and what are you most looking forward to?

Marks and Spencer's sandwiches on the highway. Indian food. Driving on the left. hard to choose from so many fun things.

Are there any other bands from Israel that we should be paying attention to?

Well, sure. Listen to Ryskinder, and REO.

If you could tour with any other current band, who would it be and why?

We love YUCK and are friends with them since we opened for them in Tel Aviv, so with them! 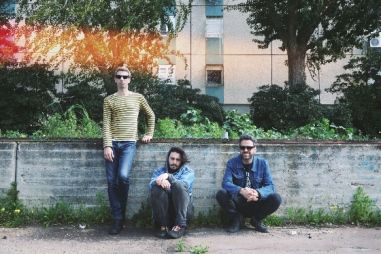 The band will be playing their first ever UK shows on the dates in October;