Some questions for L.A. Band Sextile

Initially living in Brooklyn, guitarist/vocalist Brady Keehn and drummer/vocalist Melissa Scaduto made a jump to Los Angeles on a whim as the financial climate in New York became too much. Within months of being in LA, the two met bassist Kenny Elkin and guitarist/keyboardist Eddie Wuebben ...................

Your debut album ‘A Thousand Hands’ is due 21st August, how would you describe your songs for people that have not heard your music yet?

How did the process work that you found yourselves with a label and in a position to get studio time to record an album?

We played our first show at the Echo. Jeff at Felte saw us there and a week later we signed with him.

Where was the album recorded and over what period? Were the songs already complete before you went into the studio?

The album was recorded in LA, in the back shed of this place Brady was living at. It was quickly completed in a month and the songs were written during this period as well.

What is your song writing process and where do you tend to write. Any particular places you draw inspiration from?

Brady wrote most of the material. We tend to start with a simple sound, rhythm or some kind of progression, it all varies. It's always the music first, and then a vocal stream of consciousness to develop melody and rhythm. And depending on whether the lyrics during that part of the process work or not, we may go back and re-write proper lyrics to the idea. We draw inspiration from everywhere and anything.

No, we'd rather not.

If you could choose to be on the cover of a magazine, which magazine would that be and why?

News of the World

Split 7" singles are quite the trend at the moment, who would you like to have on the other side of your 7" single?

And finally …. Your views on Apple Music are?

Shows are going to continue be the only way to make a tiny bit of money. 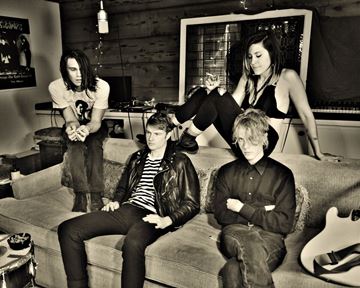