A chat with Fee Waybill of The Tubes

Wow, 40th Anniversary tour … where has the time gone?
No shit!

The band came together in 1969/70 Do you collectively still have any ambitions left or is it now about enjoying the legacy?
When your ambitions die you will die with them. We do enjoy ourselves immensely when we play. I personally want to work on Broadway! Maybe the West End stage in London also!!!

What can we expect on your 2015 tour, is the old magic still there?
Absolutely! Our current show features 7 or 8 character/costume changes. We are a 5 man band now, 4 original members. The production is not as gigantic as it was in the 80's but still very high energy and enjoyable!

How do you approach getting your music heard by a younger generation and what are you feelings about Social networking as a means to musical recognition?
We are still old school. Not a big fan of social media. Too many haters. Our fans bring their kids now and they dig it.

How would you describe your songs to that younger generation who may not have heard your music yet?
Complicated, interesting, not your typical 3 chord rock, Sarcastic, parodic, sometimes pedantic!

What was the music you listened to back in School/College days, that you still draw inspiration from today?
Zappa, Hendrix, Captain Beefheart, Sinatra, Pavarotti and of course Beatles!

Where did you play your first gig and last gig.  Any particular memories of both?
Our first gig was in the cafeteria of the San Francisco Art Institute. Haven't played our last gig yet, I hope! Playing Vegas on Saturday! Hate Vegas!!

What was the most satisfying record you recorded and why?
The Completion Backwards Principle. First time working with producer David Foster. First rock record he ever did. First big radio hit.

How do you feel the music industry sits in 2015? Is it a better place than 1975?
No, not even close. It's all a very corporate business now. No people just analytics.

Is there any place that you have not played that you still need to tick off the list?
Many places. South America, need to play polo in Argentina!

Some of the Tubes songs or even The Tubes story would fit onto a Broadway or West End stage, do you any ambitions to write music for theatre or films?
I want to act on the Broadway stage and the West End stage more than anything!!! 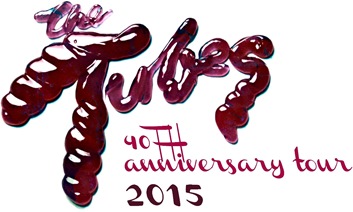