A chat with Christoph Wieczorek of Annisokay

Hi Guys, You have just completed your first UK tour, how was it?

It was amazing! I know every band that tours the UK would probably tell you the same, but we are really telling the truth. The kids on the shows had so much fun headbanging to our music, even though a lot of them had never heard of us. The feedback of the crowd was impressively great, so as you can imagine, there couldn’t be a better feeling for a musician to play shows like this far away from home.

What are the main differences you discovered when touring in the UK as against your home country?

We had been told really bad things from other bands about touring the UK. For example, the fact that there is no catering and food is not great, the crowds are hard to please, and there are hooligans all over the streets at night. But from the first show of this tour we knew that this was complete nonsense… well apart from the no catering but everything else was great! The people at the shows are so open minded and went crazy when they met us after the tour. Everyone stood right by the stage and we’re not really used to this in Germany. If a venue isn’t packed, you usually see people standing around all over the place.

How did the band form and with what ambitions?

Annisokay was actually founded back in 2007. We were just a few boys trying to make some cool music together. We had all those Nu Metal idols back then and tried to get, at least, a little close to the great sound they achieved back then. Over the years we changed a few members, to finally find some guys that really want to make music for a living and whether it’s playing for 100 kids in your hometown every two months or bigger tours. We’re still far from making a living from the music, but it’s a dream coming true to be able to visit different countries, play your music to so many people and have fans all around the world. We get messages from people every day who tell us that our music means the world to them, and that makes it worth the energy, work and sacrifices in a band.

Do you write on the road or, is all composing done away from touring? What is usually the spark that drives you to create a new song?

We honestly can’t write music on tour. Touring is stressful and your day is pretty full with all the stuff that needs to be done, so finding a quiet hour or two to write a new song isn’t possible most of the time. When we write songs we start out with the lyrics. This makes us establish the concept behind the song so we can start writing the music. The song should tell a story or have a deep meaning, and the atmosphere of the music should support this.

Your third album 'Enigmatic Smile' was released this year. Did the recording process for this record differ to that of your previous two albums?

It was totally different because we travelled to the US this time to work with our favourite producer Joey Sturgis (Of Mice & Men, Attila, Miss May I) . As I’m a producer myself, we’ve been a DIY band up until then and didn’t have any experience working with someone else. It was initially hard to trust someone else to find the sound we want instead of me, that’s why no one else but Joey came to our mind. He did a sick job in taking those songs to another level. Originally we only wanted to record an EP with him, but that the songs he produced were too good to simply throw them out on an EP. An album tends to get more attention, so we planned a second recording session. As Joey unfortunately was tied up with another project, we asked another favourite producer Will Putney (Northland, Bury Tomorrow, Suicide Silence) and he was totally down to work with us. It was a weird process overall, but it was definitely worth it as the album came out exactly as we wanted it!

Are you all musicians 24/7 or does being in a band these days still require you to have other jobs?

Although we’ve been on the road for nearly 3 month within the first 5 month of this year, we still need other jobs to earn our rents. Music, especially in our genre, simply doesn’t create that much income, which allows you to live from it. We can at least pay our bills, so we don’t have to worry about that anymore! That’s a big thing for us already, because we simply love being on tour. Maybe, if our fan base grows even more, we might be able to get a pool someday...

If the band could choose to be on the cover of a magazine, which magazine would that be and why?

We really want to tour the US someday, and being on the cover of their big name magazines, like Revolver or Alternative Press would be a dream come true! Maybe we should create some kind of scandal, so we get on the cover of the Bild (German Newspaper) or The Sun!

How is the metal scene in Germany in 2015, any other bands we should be paying attention to?

Germany has many metal bands that are huge in Germany, but not somewhere else. We toured with two of them, called Callejon and Emil Bulls. These guys are great and play some sick music. One thing that is also really popular in Germany right now is party electro metal like Eskimo Callboy. These are some really good friends of ours and are huge at the moment. And then there are a few big names everyone knows, like Rammstein or Heaven Shall Burn!

What are your plans for the rest of 2015 and how far do you actually plan ahead when it comes to your musical activities?

LOADS! First of all we will shoot a couple more videos for our current album Enigmatic Smile. All the touring kept us away from being able to shoot those, so we really have to catch up on this. We will also play a few German festivals this summer, and then we have out second headline run through Germany, Austria, Switzerland and Luxembourg in October. We will have our UK friends Fearless Vampire Killers as support. After that we already have a few other tour options, but nothing set in stone yet. We’d love to head back to the UK! 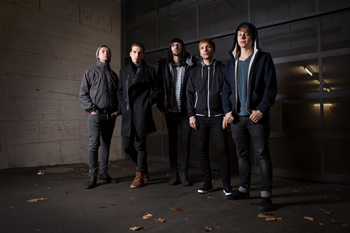