An Interview with Nick Hemming of The Leisure Society

'The Fine Art of Hanging on' is that how you feel?

I do feel like I'm hanging on, in many ways. It's not necessarily just a bad thing. In many ways I probably benefit from a precarious, untenable situation. If I was completely comfortable I fear the songs might dry up.

Wow, time flies, fourth album done and dusted, how does that feel?

Yeah, it's scary how time flies. I do feel like we should be on our fifth or sixth album by now, but it's always such a long process the writing, recording, release and promotion of an album. It feels like a million years has passed since we released the Sleeper... but it also feels like yesterday.

The storylines of the new album are already well documented, but from the recording perspective, what was different this time around?

It was a bit of a hybrid approach to recording. We got the basic rhythm tracks and some guitars and keys recorded in Konk Studios (as we did on Alone Aboard the Ark), but we then took the tracks away and completed the arrangements in my home studio (as with the first two albums). It was a good way to work as it allowed us to experiment with different sounds and production ideas. Recording to tape, using vintage microphones and a great mixing desk is perfect sound-wise, but computer recording allows a lot more freedom and portability. We recorded stuff by a stream in the Sussex countryside and in the Union Chapel for that amazing natural church reverb.

How is the archive of unused songs coming along?

There are a loads of half-baked demos knocking around, I've lost count. We've also got what I think could be the title track to the next album already 75% recorded. I found a CD of songs I recorded in 1999 in the loft yesterday. Most of it is awful, some of it bizarre, but there were two really lovely songs that I think I'll dust off and hone a bit.

The much missed musician and journalist Nick Gravenhurst wrote an article in 2008 'Why I Hate Rock n Roll' which painted a pretty bleak picture of the gig scene and venues in this country.  How do you find life on tour has changed since you started touring your first album, 'The Sleeper'?

I'm not sure it's changed a great deal. Our expectations changed for sure. I spent nearly 15 years playing to empty rooms. When the Sleeper came out we gradually built up an audience of our own. It still amazes me, and makes me quite emotional, when we play to a big crowd. That said I can relate to what Nick Gravenhurst was saying - I saw him at a tiny venue in Brighton not long before he died. Sometimes it's a struggle if you arrive at a cold, sticky venue with no dressing room and find a promoter who really doesn't seem to give a fuck.

How do you go about creating new music, do you have to been in a certain space, mentally and physically or is it, when the spark strikes?

I tend to write more when I'm feeling a bit low, happiness definitely writes white for me. There's also a strange trance like state, just daydreaming really, that spawns musical ideas or lyrics. I'll be strumming away on my guitar and suddenly realise something worth pursuing has arrived - a lyric or a chord sequence - but I won't know where it's come from. Once I have a structure and a train of thought to work around I'll just run over it endlessly in my head, until I finally complete the song. Sometimes it'll take days, sometimes years.

Do you give any of the other band member's encouragement to add to the writing process?

I've tried co-writing in the past and I really struggle with it. I find it hard, almost impossible, to write with anyone else in earshot. I think it's because I'm quite self-conscious and if anyone else is present I can't attain that completely relaxed, dream-like state that throws up ideas. There have been a few collaborations with Christian, but it's always been me passing on songs for him to finish (Fighting Chance) or me incorporating part of his song into mine (It Dissolves in the Writing).

Do you ever write music with an eye as to whether it will sell or have a popular appeal?

Never, I wouldn't know how to go about that. In fact the opposite once occurred, I almost ditched Fight for Everyone as I thought it was too commercial sounding. It was a real struggle to finish the lyrics as I was worried about it sounding cheesy. I'm glad I persevered though as I'm really proud of it now, and it's great fun to play live. The catalyst to finishing the lyrics was a night drinking vodka and watching the 2012 Olympics.

What are the prevailing memories of your first and last gigs?

My first gig was at an Art College in Winshill, Burton-on-Trent (that no longer exists). I remember ironically putting my foot on a monitor in full ROCK pose. A load of performing arts students grabbed my leg and tried to pull me into the crowd. I panicked a little, but luckily they relinquished my leg and I retained a small vestige of my pride. The last gig we did was Full Time Hobby's 10th Anniversary at QEH in London. We played the Sleeper from start to finish, it was a really wonderful night.

What was your favourite album of 2014 and why?

I didn't actually listen to a huge amount of new music in 2014, which is strange for me, maybe I was too wrapped up in getting our record finished. I did hammer the War on Drugs for a few weeks over the summer. I love the production on that record, the layers of guitars and synths and the drum sounds make a real treat for the ears. Oh, and the Owen Pallett record is one that I'm still enjoying.

I'm pretty one dimensional in that my life seems to always be wrapped up in writing or recording music. I do like to cook and I like to surf whenever I get chance to head over to the South West or Wales.

What one piece of advice would you give to anyone staring out on a music career in 2015?

I'm not sure I qualify to give anyone advice! Just try to do your own thing, don't copy other people, find your own voice and write from the heart. 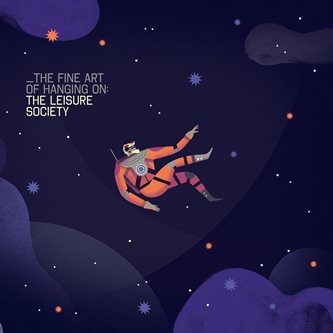