A chat with Paul from London band Playmaker

Hi life is good! We are playing tonight in Islington, at the Old Queens Head and looking forward to playing the new tunes from our new album!

Your debut album, 'Lucky Bag' was released last March and your new LP 'The Girl Who Thought She Could Fly' is out on 30th March this year. What was the main differences recording album no.1 vs album no.2?

The main differences were that with Lucky bag we had many of the tunes recorded over quite a long period of time, songs hanging around that were not on an album, so in fact it almost turned into a ‘greatest hits compilation’ but without the hits. Were as the new album, 'The Girl Who Thought She Could Fly’ was written over around 6 months and recorded straight away as we were writing, and turned into a bit of a story with the songs joining together to tell that story..

How did the band come together and how would you describe you music for first time listeners?

I have known Pete the drummer in Playmaker for around 10 years and we had hung out in other bands before Playmaker. Stacy the bass player was one of the group who used to come along and watch us play, help out with the gear etc, and it was a natural progression for him to end up with us making the music! Matt was the last to join, again a mate of a mate and we started jamming and it just clicked.

I would say the music is primarily guitar driven, but the tunes are most important, we arrange the songs that way, so the tunes can float to the top! It’s hard to say what or who we sound like, people see different things ..all I would say is have a listen to our single/ title track from the album The Girl Who Thought She Could Fly,I think it’s a Bond theme with guitars!

How do you approach getting your music heard and making an income. What are your feelings about Social networking as a means to musical recognition?

We very much approach everything we do from a creative and enjoyment point of view. If we enjoy it we do it! We don’t worry too much about making a living, its a sign of the times these days that a small percentage of musicians make real money from their music, its a fact that you need something else to pay the rent..

Social networking is amazing, you can announce a gig, stick it on the events page of FB and you instantly have reached out to a few hundred people. The old way was printing flyers handing them out at gigs, so much hassle..and without crowd funding site Kickstarter we wouldn’t have got our first album made so..

What are your hopes and ambitions for the new record?

We really want people to just enjoy it for what it is. If we can get it played on the radio..even better! If it gets our name out there its done its job..then on to the next recording sessions!

Was there any music that you listened to through your School / College days that you still get a kick out of today?

I listen to lots of stuff from back then, I went on a Youtube journey the other day..where one song leads to another ..and ended up hearing Bluetones, Suede, Strokes , Clash some brilliant tracks that made me want to play guitar!

Your debut LP was made via funds raised on Kickstarter. How did you find that experience and would you recommend using that platform to other new artists?

I would recommend any artist to do the crowd funding thing. We made a lot of new fans through posting a funny little video, and it’s fun to reach out you know.

If you could tour with any current band or musician, who would that beand why?

Black Keys, I love their sound and energy. They look like a great Rock and Roll band.

What was your favourite album of 2014?

Any tour plans for this year?

More London shows then a launch for the album in April. 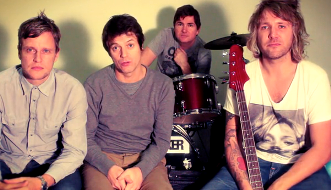