An Interview with singer/songwriter Alex Highton

Second album done and dusted, what was different in the studio this time around?

It was very different in that we hardly used a proper studio as such. On "Woodditton Wives Club" I recorded the whole thing at Press Play Studio in London, which is owned by Andy Ramsay of Stereolab (he produced too). Spent the best part of ten days in there and it was a great experience.

For the new record we didn't spend much time in "proper" studios at all, just to record some drums really. A couple of days was all we had. The rest of it was either sent to me via the wonder of modern technology (Robert Rotifer's electric guitar parts from Canterbury, the horns from the USA, Laura J Martin's in Liverpool, John Howard's piano in Spain, etc, etc) or in my little home studio, which isn't very high-tech at all.

Putting this record together was like a jig-saw that Bear (The producer) & I had to piece to together. It was a really interesting way to work actually. A bit like a sculpture appearing out of a big piece of rock. We just did whatever we fancied doing on any given day.


You have lived in both Liverpool and Cambridgeshire; does either location inspire your music?

Absolutely, you can't escape your roots (and I wouldn't want too) so Liverpool never really leaves me wherever I am. I suppose that's how most people feel about their home town. It's a very musical place you know..

The countryside in which I live now though, the space, the peace, the strange people who live in the village (all lovely of course), how could it not....


How would you describe your songs for people that have not heard your music yet?

That's a difficult one. Something I always struggle with. I'm into writing songs, I'm not really that bothered about the genre or whatever. I just like to follow my nose, not force things, amuse myself.

There are a million artists I admire but this album has been compared to people like Sufjan Stevens, The Miserable Rich, Nick Drake, Tim Buckley but then again I've also had Field Music and even Charlie Chaplin.

There was a review the other day that said one the songs sounded like "Prince"!

I'm not sure. I suppose deep down I'd like be like Harry Nilsson. He just did whatever he liked. When they asked him what his style was he said "well they're just songs, you know..."

Are there any stories behind any of the songs on the new record that you would particularly like to share?

There's stories behind most of them but I think it's best to let people listen to them and work out what they think.

I did have this idea when I was making the record that these were the thoughts rushing through someone's head as they were about to die. I put it together like that. Then when I realised how pretentious that sounded I stopped mentioning it!

Who designed and what was the inspiration for the cover for the album?

The album cover was designed by my friends at Design Friendship, extremely talented people who have helped me with all sorts of stuff over the years. They're absolute diamonds. The photo, however, was taken by another very good of mine Frank Van Delft in Holland. He took me to a museum of old computers and typewriters and just took loads of shots. They're virtual reality glasses circa 1993 I've got in my hands!

Do you ever write music with an eye to whether it will sell or have a popular appeal?

Just how difficult is it to earn a living wage from being a musician these days and where would you say your strongest fan base is domiciled at the moment?

It's very difficult but the flip-side is anyone can get out there and make records nowadays. There's not so many gate-keepers and if people like what you do they can generally stumble upon you. That's what's happened to me, it's all been a bit of an accident. I was meant to have given up any ideas of a music career when I moved to the country a few years back. It didn't quite work out like that.

I don't do it for money, which is just as well.

I think probably most people know of me in Holland, where my first record went down quite well. They're lovely people the Dutch.

I spend most of my time looking after my kids so I don't get much downtime, and when I do I normally seek out my guitar! If I'm not doing that I'm probably watching Everton lose on the TV.

How important do you think it is for new artists in 2014 to find a label?

I don't know. It would be handy for me but then on the other hand I get to do what I like. You can do it either way, I suppose the difference right now is you don't NEED them. Although saying that, I wouldn't mind having some big label behind me, it would take the pressure off financially that's for sure. EMI? Sony? I'm here if you need me.

What was your favourite record during school/college time that you still play today?

There are so many. David Ackles eponymous first album. That was a very important LP to me.

What are your musical plans for 2015 and how far do you actually plan ahead when it comes to your musical activities?

I don't really plan anything, maybe I should! I'm going to Holland to play some shows in a few weeks, then I'll be going back over later in the year. We'll be recording a new album for release hopefully in the autumn.

I'm hoping to tour in the UK too. Anyone out there interested in having me come play do drop me a line : ) 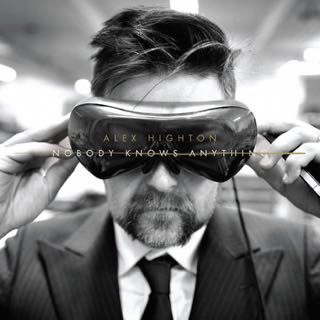