The thought on everyone’s mind pre-festivals in the is ‘what will the weather be like?’ and in 2012 you can pretty much predict rain and mud. How much mud, and how much stamina is required to navigate it depends on the size and layout of the festival.

It seems the days of lying on the grass in the sun listening to a band are long gone. Standing in wellies in the mud seems the norm, and this has had a knock-on effect on ticket sales in the U.K festival market, with many not selling out.

Having said that, Saturday at Latitude with the ever popular Elbow must have been close to full. Friday and Sunday were less busy. By Sunday, the weekend campers seemed to be weary from the effort of the previous two days.

So on to the music. Not much happened on Thursday other then the entertaining Cafe & Theatre tent so it’s Friday when the music action kicks off. I should just say at this point that Latitude has a whole myriad of entertainment going on: arts, literature, poetry, cabaret, dance, opera etc but for this review, it’s music that we concentrate on.

We start off at a stage in the woods, usually called the stage, this year it’s the ‘i stage’ sponsored by the Independent newspaper group. First band up is the maths rock of Breton followed by an immediate highlight of Canadian band Cold Specks with the stunning vocals of Al Spx to the fore. We missed Cate le Bon (was she actually there?) and proceeded to the ‘Word tent’ sponsored by the now defunct magazine (which was rather sad) for Destroyer who were in fine form. What fabulous musicians Dan Bejar has around him.

We are in the middle of a great run of bands. Next up is War on Drugs who were in almost extended guitar solos ‘jamband’ mode and excellent for that. A festival highlight next was a refreshed and eager Antlers, playing songs of great intensity. Pete Silberman’s falsetto voice and stage movement really added to the emotion of the set.

Not the oldest band next but Dexys are getting on a bit. Their drummer looks like your favourite Granddad, but when behind the sticks, well, all age fades away. The part theatre, part music show was entertaining but most people where just waiting for ‘Come on Eileen’, which they got!

Back out into the woods for Kurt Vile who started late, so we got a short set. He played a couple of acoustic songs then two superb electric numbers before ending up solo and acoustic.

Yeasayer were full of life and delivered a vibrant set before an expanded version of Bon Iver hit the main stage as Friday headliners. This was a lovely 90 minute show with great musicianship and songs. Starting late the band motored through the set without pausing for breath. Two drummers and brass - the songs were wonderfully brought to life. A fine end to a great day of music.

Saturday surprisingly starts off with Sharon van Etten (who I thought would have been higher up the bill). So a nice set, and in some cases a surprising choice of song. Serpents is the only song plays on an electric guitar. Her van had got stuck in the mud, then the tow truck, and did not seem to be a big fan of the mud. Perhaps this explained the quieter set.

I caught the end of a very interesting sounding Sunless ’97 and the start of blues duo Deap Valley before heading back to the Word tent for a sweet Lianne la Havas. A pop starlet who can sing, she seemed to be rather overwhelmed by the size of the crowd. The audience for Of Monsters and Men almost packed out the small i stage which was totally rammed for their joyous set. The crowd stretched way back into the woods for what was certainly the buzz band of the weekend.

Wooden Shjips were as awesome as ever on the same stage (another hard working drummer in this band). The distorted guitar sound was mind bending. The polar opposite next wth The Staves from . An all girl trio with wondrous voices and harmonies. Another band of the festival followed with I Break Horses who were absolutely storming. Great songs and power and all this run of four bands have been on one of the smallest stages of the festival.

dEUS are next to cross our path after refreshments, the Belgian rockers delivering pretty much what was expected, good solid rock. Laura Marling looked serious on the main stage as she ran through her well know tunes. This end of tour set finished 15 minutes early.

Then there was a magnificent Elbow. Guy Gravey has no problem connecting with any crowd, big or small; it’s generally BIG these days for Elbow. A runway from the main stage meant that Guy could get out into the crowd and immediately it’s a more intimate show for us “Storm Riders”.

The band are so keen they are on five minutes early and give us a great selection of songs and a tremendous show. At 11pm after the fireworks we all drift off into the night still singing our hearts out.

Film tent next for a midnight session with Mark Lamarr’s God’s Jukebox presenting first up,  Gizzelle, a 26 year old  blues belter from L.A. Quite a stunningly powerful voice, playing blues and rockabilly standards with a local band and not much practice time. She was excellent. 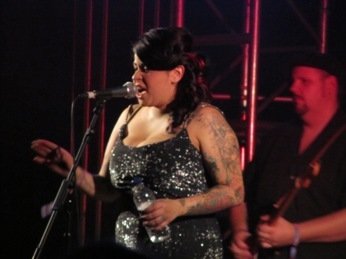 o finish the evening off, it is the legendary Wanda Jackson and band. 74 years young. Although suffering problems with her voice, this was a live music history lesson. Charming, and engaging. More frail these days but with husband Wendell at her side since 1961, she still has a radiant smile. Perhaps a Guy Garvey / Wanda Jackson radio show on BBC6 would be a good idea!?

Sunday dawns and the sun is out. Everyone is weary and heading into the festival site at mid day all is quiet, no music anywhere apart from the main stage with Rufus Wainwright and his band, which is where most people seem to be. Reports of the set are very positive but I use the soundtrack of Rufus & Co and take a very pleasant walk around the site.

Both Alabama Shakes and Edward Sharpe & The Magnetic Zeros were hits on the Obelisk Stages during the afternoon, the former with their southern blues and the latter with their blend of and good time rock n’roll! 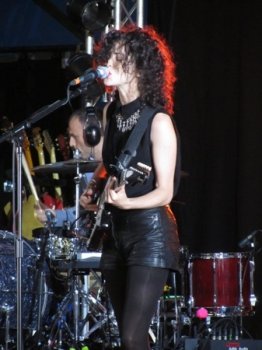 The Levellers put in a fine acoustic set on one of the outer stages later in the evening and that was our day, and festival done.

So overall a positive seventh edition of the Latitude festival when even with the inclement weather, everything still ran to time.

The campsite and entrance route to the festival site suffered from the weather most, as did the car parks. The latter caused problems mainly for the ‘day’ visitors and those leaving early. Sunday being dry, the mud dried out sufficiently to be far less of an obstruction. The one thing festivals cannot control is the weather but to keep festivals enticing the punters through the gates there is going to have to be some creative thinking if we have many more summers like this one.

The organisers of this year’s Latitude do deserve a lot of credit for keeping things moving to time and, for example, keeping the toilets clean - no easy feat - this year splitting them into Male/Female units which seemed to work well.  The BBC website report that the festival could expand for 35,000 to 40,000 over the coming years. What, we just get clean toilets and ….!?

Please let us know your views of this festival, via our Message Boards