There is nothing you can do about the weather. A festival will generally go ahead come rain or shine. From the punters point of view though, the festival takes on a different dynamic depending on the conditions.

Imagine turning up at the inaugural No Direction Home Festival in the grounds of Welbeck Abbey in in glorious sunshine, leisurely putting up the tent whilst sipping on an ice cool lager. Back to the reality of a British festival summer; cold, wind, torrential rain, everything and everyone soaked by the time we head into the site. When the rain let’s up its teatime.

Luckily on a site roughly the size of the Park Area at , everything is close to hand and the place is not overcrowded.  We are greeted by the sight of the Somerset Hot Cider Bus and truly fortified we head for the main (Lake) stage (pretty much the Garden Stage at End of the Road) for ’s majestic Lanterns on the . The songs from the debut album still sound good and ring true, but the band are just at the point of needing new material.

An easy walk to the second stage, a smallish tent (The Electric Dustbowl) for the rocking duo  Wet Nuns. I had heard a few of their blues rock outs before and thought they were a four piece. Sign of the economic times I guess. They made a welcome noisy racket.

Timings are right to get to see bands on both stages and here is the first plus for the festival. Every artist gets a minimum forty five minute set so you really get to see what the artist / bands have to offer. Throughout the weekend the event runs to time. A massive credit goes to the stage crews, who went unnoticed and put on a seamless performance whatever the conditions, all weekend.

Django Django were really good fun. Hot Chip is the nearest comparison but I was sure there were some underlying Steely Dan vibes in their bouncy set. Just the thing for a cold night.

Surprisingly some bands did not come over live as well as they do on record. Peaking Lights were a case in point, visually unspectacular, the soul of the songs just seemed lost on the night, so it was not easy to maintain interest.

again for the highlight of the evening which was Dirty Three. The band arriving on stage to Boz Scaggs’ Lido Shuffle and Warren in danceable mood (thanks perhaps to Andy’s loos delivering clean festival toilets!). In brilliant humour and relaxed throughout the lengthy set, the band delivered in fine style.

were a pop dream before The Low Anthem rounded off the evening. Expanded to a six piece which meant that the band have now the means to capture the attention of larger festival crowds. A nice balance of raw stomping and gentle songs that kept a cold audience entertained. 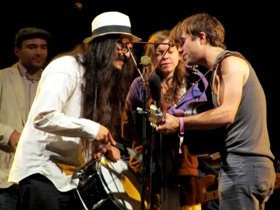 The actual festival site is deep into the grounds of Welbeck Abbey, about 3- from the road, so there were no sound restrictions or curfews, and DJ sets extended into the early hours.

Saturday dawned damp, breezy and cold and herein lay the main problem for the afternoon sets which would have been brilliant on a warm sunny day. Acoustic singer song-writers had to go that extra mile to keep us warm. Hollie Fulbrook’s ‘Tiny Ruins’ were a ‘find’ in the tent. Nice tender songs. Seamus Fogarty in loveable ‘Fence Collective’ mode (he forgot to bring his albums to sell) had a lovely violinist to accompany his songs. Two fine sets straight off the bat in the tent.

Liz Green, Martin Simpson, The Cornshed Sisters all followed but by his time I was just desperate for someone to tune up an amp and wring the neck of an electric guitar.

A glimpse of sunshine and nice lively set from Euros Childs, followed by a sombre solo Mark Hamilton. A deep set of songs which would have been best heard with just a voice and acoustic guitar rather than all the loops added to each one. A very talented musician, Mark is normally a part of the band Woodpigeon, so this solo set was a nice change.

Beth Jeans Houghton, as visually spectacular as ever, seems to have stepped up a notch in audience awareness with her long time band. The Hooves of Destiny gave the audience much to jig around to. 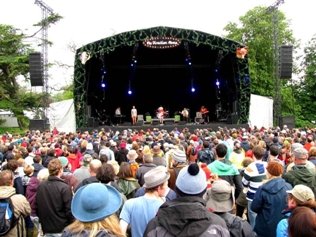 The first band to really hit the spot for me on Saturday were Other Lives. These guys really seemed serious about the songs. Early comparison in my mind was Midlake. Good intensity and musicianship.

Gruff Rhys and band were thoroughly entertaining and were followed a bit later by the intense physch sound waves from ’s Wooden Shjips’ offshoot, Moon Duo. stage headliner is Andrew Bird who is as accomplished as ever and plays a full concert-length.

Sunday and glorious sunshine (who left the suntan cream at home?).Trembling Bells are first up which is quite surprising considering their growing reputation and work with Bonnie Price Billy. They’re a folky based psych rock group who evoked many 70’s memories on this Sunday morning.

Serafina Steer is next with her harp.  Having played alongside Patrick Wolf, Jarvis Cocker and Bat for Lashes, her solo show is in the already crowded marketplace that is Joanna Newsom. It was difficult not to draw comparisons.

Next on the was perhaps the most enlightening moment of the weekend with Canadian Al Spx as Cold Specks. Al has a voice as deep as the deep south with a band  of talented musicians. She captivated the sun-drenched audience with songs from the debut album ‘I predict a Graceful Expulsion’ 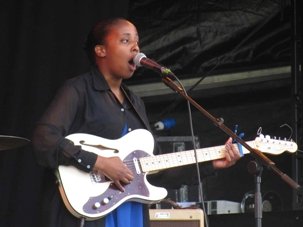 There were literary, comedy, book clubs and acoustic sessions dotted around the festival. The only time I strayed that way was for Will Hodgkinson talking about his book The Ballad of Britain with Alex and Livinia from Trembling Bells. Unfortunately Will could not make it but Alex and Livinia filled in.

Local’s Charles and Rebecca, otherwise know as Slow Club, stormed the main stage with their band for an hour late on Sunday afternoon. A triumphant indie hit-filled set and the band with the most smiles at the festival!

The Unthanks brought along the Brighouse and Rastrick Brass Band for their set whilst Zulu Winter, and Leeds-based Spectrals toiled away in the tent.

The penultimate act of the festival was Richard Hawley (with a broken leg) playing with a newly discovered (?) rock heart. Letting rip with a succession of guitars, this did prove that a ‘Leopard can change its spots’.

11pm Sunday Night and it’s down to Orange County’s Ramones wannabee Mikal Cronin and band to scorch the roof of the tent with some incendiary Rock n Roll!

So in summary a very successful first year for this festival put together by the people behind the now established End of the Road Festival in .

A lot of commitment, risk, luck, goodwill and effort went into the creation of this event. Let’s hope it finds its feet as an annual early festival. Next year there should be a few bands heading for in need of a festival plus I am sure the sun will shine!

Please let us know your views of this festival, via our Message Boards

Earybird tickets for 2013 are on sale now