Back outside for Gary Clark Jr...Great guitarist, tight band, great songs and great weather!  Next up...War on Drugs. Great layered waves of sound and clever songs, I do love the cd.  Blitzen Trapper is up next. Another great rock band ,with superb harmonies.

Inside for the Cloud Nothings.  Packed small room, sweaty messy loud. Just the way you would expect them.  Is the drummer insane?  Maybe. Now outside for Bob Mould playing’ Copper Blue’  start to finish.  Bob and his band have been doing the same show a few times lately so they have it down.  Loud and smooth, a great album performed on a sunny patio can’t get much better than that. We decide to move before Roots begin and we head out in search of another show.

We stop by Latitude and lucky enough, Dunwells have just gone on.  5 members,5 part harmonies, some very solid songs and a sound that goes over well with me, Sandra and the crowd   Dutch Uncles are up next.,crazy mathematical layered sound of mayhem...interesting and noisy and rather fun.Time for dinner.

Then it’s off to Buffalo Billiards for The Standells...60s garage rock...the original band who sang "Dirty Water".Oh Verona were supposed to be up next but sadly they could not do the show.  So a local group takes their place and while they are never introduced...they are quite popular around Austin so they get a great response. Somehow they remind me of the Bravery. But their sound goes everywhere.

Next up, No apparently these guys have only been together for a few months?  hard to tell...lead singers voice is particularly soothing, musicianship is top notch, the sound is dark, and delicate and I can only imagine what a few tours will do for these guys.  Nobody leaves while they are on so that’s a great sign.

Now, because of a lot of schedule changes, the evening opens up and I run to catch Clock Opera and see Django Django again...had to...liked them alot.so why not see them again.  now its winding down and I stick around to see Slow Club and find out they have switched showcases and Dutch Uncles are back on and while I enjoyed them this afternoon, it’s also midnight and an early morning flight means it’s time to head back to the hotel. So...SXSW 2012 gone, and another year to get through before SXSW 2013!!

A quick final note....if I was to pick one band that made me smile the most....it was Pickwick, Michael Kinuwuka and Alabama Shakes lived up to expectations and went beyond that.

Bands like mynameisjohnmichael and Nick Waterhouse blew me away as I had no preconceived expectations and they were fantastic. Electric Guest...well...what I heard of them makes me want to go and find them and watch again. Big Pink....if you like the cd...goes and see them! Plus so many others. A Solid 5 days in Austin! 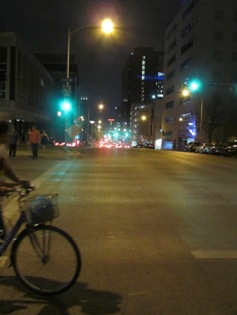