Day starts heading to Mellow Johnny’s bike  shop to catch Pickwick only came to know this band when doing some SXSW research and really glad I did.  This kid has got it, band is great, not sure how to describe him but, his voice is stunning and I would suggest to anyone, go and check out the band and their KEXP radio station videos.

Now it’s off to Cedar Street to see Of Monsters & Men and Ed Sheeran.  Of Monsters & Men are fantastic. Very similar to our Canadian band the Stars, great harmonies, clever songs, from Iceland!    Ed Sheeran is up next, and this guy is pretty darned entertaining.  He does have a great voice, and by his last song, he has got the entire crowd doing an audience participation song, while he loops some self-created beats on his mic, he has a split crowd singing parts of the song. He is a showman and must admit, I quite liked it!

An attempt now to go see Dry The River failed as the W Hotel patio where they were to playing only holds 100 people and its well past  full.  So....back to Mellow Johnny’s for rockabilly band JD MacPherson.  New cd coming out on Rounder, this fellow and his band mates know what they are doing.  A great showman with a spectacular band. Big keys, stand-up bass, saxophone, great upbeat party going on at Mellow Johnny’s

Now we return to Cedar for the sweet harmonies of Grafitti6 and Fanfarlo, both great patio music, especially when you are on Cedar St Courtyard!

Dinner time!  A little rest then mayhem! Here is where I throw in my opinion ....watch out....don’t hate me!!

When events like the Jack White party get announced, I almost always go in the opposite direction.  Not that I don’t have respect for young Jack, or appreciate or enjoyed his music, but its these kind of shows that almost always seem not the worth the work you have to put in to enjoy it.  So......

Third Man records night...starts with a text from a friend who says, at 6.30, an enormous lineup has started, at least 4 blocks long already along 6th street, and it’s not a great start.  We rush over to stand in the line with friends.  I really needed to get in there as when I was deciding in advance as to whether to go to this party, I listened to the bands opening for him and found a nugget!  Electric Guest simply sounds wonderful and they were first on the bill and I did not want to miss them!

So here we were, sitting outside and after an hour, it seems they are letting people in.  they post online that the bands have all moved their start times back by an hour which means should be no problem seeing Electric Guest as they should be on at 8.30........well....wrong!!   They let 100 or so people in and then close the line off. No more guests going in and we can see Electric Guest go on!!  No movement of the line, and nobody watching the band inside stages on 6th, it became frustrating!  25 minutes later, they let the next 50 people in which include us.  We get inside to hear one song by Electric Guest and they are done!...now I am a little angry.

Wander around for a bit and decide to ask security why they were not letting people in....and sadly find out Jack White requested the doors be closed off so that his people could move his equipment in for his show and not be bothered by people coming in!!

Now White Rabbits come on, double drums, great band, fantastic singer and a different sound. They almost make up for being burned on the first band but when White Rabbits come off stage and they still have not let anyone else into the venue as more equipment for Jack has to come it, I am tired of the Hipsters, tired of the attitude and decide to show my defiance by leaving this mess and going to another show where I am appreciated!!! So we leave, not before checking out the line which now runs at least 7 blocks, with the club not even 10% full...I feel bad

Now it’s time to be welcomed into a showcase. And watch a delightful Exit Music. Crunch little band with a great lead singer. Then Big Pink...fantastic big sound, great lead singer, all of us dancing around and I am happy to have left the hipsters back on 6th street.  After Big Pink it’s Built to Spill. Full on rock show, great songs and these guys have only got better with age!!

Now it’s a quick walk to another showcase where the attendees are appreciated!  Brit Embassy at Latitude for Howler and 2:54    Howler are just pups but they put on a good show, they are like a baby Strokes but they do really well and will be happy to see them back in Toronto.  2:54 are next ...pretty solid set but at 2am..i am tired!  time to go! 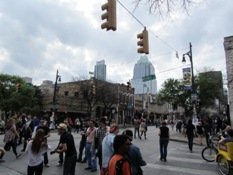