Again...the plan changes ……We check out the Google/YouTube party line-up...none!  Easy access for badges so, we decide to go see Nick Waterhouse and Lee Fields at the Hype hotel.

Nick Waterhouse comes on with three backup singers, saxophone and a great rock-a-billy blues sound. A rocking band and a great start...the kid really gets the people moving!

Next up, Lee Fields!  He is like a smaller version of Charles Bradley...but with more energy!  This young/old guy sings for the ladies and they sing back...if only I had half of this senior citizens soul or charm!!  Fantastic set!!

Then a quick run up to see Cults and Frankie Rose at the aforementioned You Tube/Google party.  Cults are perfectly dreamy and a great sunny band to listen to in the beating sun!  Frankie Rose fits right in as well; though everyone including the band seems to be suffering from the night before, and that morning feeling but, both bands get a great response.

After getting a tweet that Tennis could not play at Mellow Johnny’s and that Nada Surf are going too instead, we are off! The band plays an acoustic set, not all members of the band are there but, the sound is as good as it gets.  Old and new songs, a great pre dinner event. Now dinner...a big dinner at Moonshine and then we are off again

Cold Showers are first up and fit right in with the Mary Chain crowd. a dark and brooding LA band to get night off on the right track. Next it’s Night Beats. Again a great sound and a hit with the crowd. Splendid songs!

Canada's own Arkells up next, great rock n roll, crowd really perks up now with a big sing-a-long after which, it is Titus Andronicus who deliver a good set but really, everyone is here for one band and that’s up next.

I never really know what to expect from The Jesus & Mary Chain but tonight they just burn through with a greatest hits set as well as, play a couple of new songs including one available on limited addition white vinyl at the merchandise table!! ...A frenetic, crazy loud, greatest hits set of songs and that means a lot, to a lot of people present!  A really a solid set and I am so happy I decided to give these boys a chance tonight...really high quality performance here with the band sounding fantastic 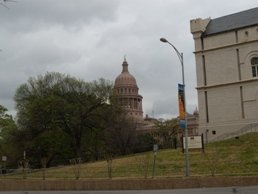