Start off by wandering up toward Mohawk to see django django but we have a little time. Why not go into Paste magazine party, get some early cool sounds and beers. Sandra shops for lovely Tretorn shoes on display and then listen to a kick ass band called mynameisjohnmichael   fantastic horns, great blues rock sound with a dynamic energetic little singer who has the spirit of some great performers in him like Springsteen.  It’s great how these little side trips turn out so well

Now to Mohawk.  django django are first on, club offers some great viewing spots so crowd looks sparse but by the time the band gets into their 3rd song...everyone is paying attention   I did love the record so am particularly happy that they can pull it off live, great fun, like a funky Byrds at times, fun to watch especially when 3 of the 4 band members play keyboards at once and everyone agrees!

Inside Mohawk its Husky performing. I didn’t know much about these guys but they are a solid 4 piece with beautiful harmonies. and a great front guy

Outside now for Kindness, a funky awkward long haired white guy singing funky pop songs ...good band and back up singers, they have their moments.

Back to the Paste party to catch up with Chain Gang of 1974 who are a little more rock influenced this trip and much less dependent on keyboards...very energetic

Now to the Convention Centre to see Michael Kinuwuka and Alabama Shakes. I cant really say enough about these two. Sound in the Convention Centre is great. Crowds are huge, Michael does a 45 minute set of great soul blues like a Bill Withers. Great reaction and going to see him again for sure.  Now the room is full and Alabama Shakes come on.  These guys are the real deal, this singer can melt any heart, honestly, stunning sound and this band rocks.  just go see them!

A quick dinner...and its off to see Tribes. at the Warehouse.  New venue, sound is good enough and Tribes were great.  Early set and the place is packed. Fun are supposed to be 'fun.'  big popular group these days but a delay of 45 minutes to set up an acoustic system seems silly!  Band comes on and wins the crowd over and I must admit the  kid’s got a great voice.

Twin is up after another delay...crowd is half gone but the band still puts up a brave front and put on a solid show for their fans

Neon Trees follow with their big TV commercial song and very campy lead singer puts on a great show. Crowd eats it up and again, must admit, the band do a nice job

Now it’s Kasabian bombastic. light show,.showmanship,..loud..and rocking   just as i hoped and expected but its 2am and time to sleep, so the set ends, wander home and pass out!! 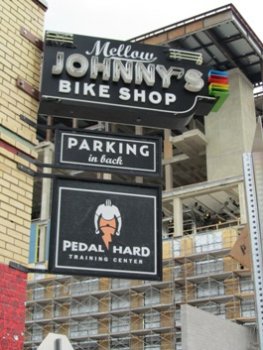