Mutations is a wonderful festival. it’s a key output of the Brighton music scene, with past headliners including White Denim, Lightning Bolt and other off the wall bands not often seen together. Its had various forms over the years, with 2022 featuring several of the organisers’ favourite venues, many fairly intimate, and a huge number of their current favourite bands - over 80! Big thanks to organisers including Relevant Records, Bella Union, Brixton Windmill and many others.

Q: Which Mutations bands did great unexpected covers by a) ACDC  b) Courtney Barnett  c) Girls Aloud,   over the weekend?

A: at the end of the review!

I had not seen many of the musicians before, so lots of new music. It all started gently, with some of the few acoustic acts of the weekend, both excellent. Jemima Coulter followed by Sister Ray. SR was one of those performers who articulate more personal emotions and feelings with the audience than most of us do with our best friends, drawing on issues like racism around her native American ancestry, and a painful breakup that forms the basis for her album Communion. She seemed delighted to be here, her final gig after a long American tour.

These two were in the Latest Music Bar, a great basement venue with some good places to view the stage - up front obviously, but on a late arrival the narrow entrance stairs, standing on the few chairs at the back, or sitting on the unused bar. Gaffa Tape Sandy here were a great raucous band from Brighton and Bury St Edmunds, with some memorable tunes. Luckily I was right at the front for Yabba (I’d only gone because Wunderhorse sadly dropped out through illness - a cue for various unsuitable doping and horse jokes in the audience).

Unexpected things are often the best, and so it was a bunch of hard kids from Dumfries, uncompromising RHCP-type raps with a powerful shouty sweary singer, who finally smiled and looked genuinely pleased when we gave them one of the few encores of the weekend, a rare thing in a tightly packed schedule.

Over to Patterns for Pale Blue Eyes, from Totnes, One of several bands who sounded a bit ordinary to me on record, but were terrific live. A bit like New Order but with a powerful motorik rhythm and great singer. Then to the biggest venue, Chalk, where all the headliners played. First up WH Lung, who also had a debt to New Order and  another great charismatic front man.

Finally tonight a festival highlight for many, the amazing Pussy Riot! It quickly became apparent that this was no normal gig. First their Russian stage director gave a lengthy explanation of what we were about to see, the latest version of their Riot Days performance. Then they came on, in trademark balaclavas, to some heavy electronic dub beats. A big screen showed images of the collective’s history, with subtitles, as everything was sung in Russian.

Most of the words were from Maria’s autobiography, Riot Days, about their famous Kremlin cathedral guerilla gig and subsequent long imprisonment. A powerful unforgettable art and dance experience, particularly when as an encore they delivered an update in English on Ukraine and their opposition to the war. The only complaint might be that there was none of the stunning music and video from their many albums, not even this year’s Matriarchy Now. They had the busiest merch stand all weekend, partly as they announced most of the profits went to a Ukrainian childrens home they were supporting.

Friday added another venue, the excellent rock pub the Hope and Ruin. Naked Lungs were on first, an agreeably heavy Irish roar. Patterns today asked me for photo ID, an  pleasure not experienced for many years. They also took photos of everyone entering, apparently for our own safety…well worth it though for Plastic Mermaids, from the Isle of Wight, and highly recommended by Rock Club writers who had seen them the night before in Southampton. Emotional aural autobiography from the singer, over powerful pop and prog, alternatively happy and extremely sad.

Bodega were great New York 1970s new wave types, but perhaps a bit too slick after the rawness of the earlier bands. It was easy to leave and walk 5 minutes up the road to see the end of Pozi, a 3 piece with alternating vocalists and excellent violin. Then to the headliners at Chalk. Really looking forward to Warmduscher but disappointed with the sound, about the only band all weekend who suffered. A mad funk mix from members of Fat White Family and other naughty South London bands, but for once it didn’t capture the fun of their recorded material. Luckily Squid made up for this. One of the best experiences of the weekend, a kind of homecoming although they said they hadn’t lived here for years. Everyone sang and danced along. One of several  headliners here who evolved together and all play an unclassifiable mix of punk, jazz, prog and poetry.

After that it was uphill to the Hope and Ruin for late night parties curated by a special guest, Tim from Brixton Windmill. Me Rex were great, with a dinosaur theme of sorts, Joyeria from Canada too, then O. , probably the hardest people to find online, were an excellent duo, just drums and sax. And finally it was time to find the bike and head home through the Brighton night life.

Saturday dawned wetly, and it was a real effort to bike in ‘early’ (midday) to catch Lowly at the famous Green Door Store, but well worth it. They were highly recommended again by other Rock Clubbers, headlining Bella Union’s anniversary do in London the night before. The perfect band to wake up to, with breathy vocals and lovely electronica, rising to heady crescendos, reminiscent of other Scandi/Iceland bands like Sigur ros. Sniffany and the Nits singer seemed nice as she soundchecked…but the tiny packed Folklore Rooms was just too hot and lacking in much needed coffee, and they went on 20 minutes late. In fact, just as I left the room. Sounded suitably loud and punky though. 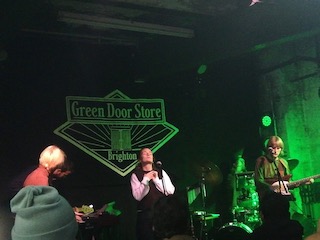 Aborted a trip to the legendary Prince Albert to get that coffee, then freewheeled down the hill for the weekend’s mystery guests. Announced just a few days earlier as the Murder Capital, they played stuff from their new 2023 album Gigi’s Recovery, as well as fan favourites. Very professional, the suave and slightly menacing singer   prowling the stage, even descending into the audience to start an early afternoon mosh pit. Thence to John, a very loud, noisy duo of Johns, crunching through new single ‘theme new bond junior’. 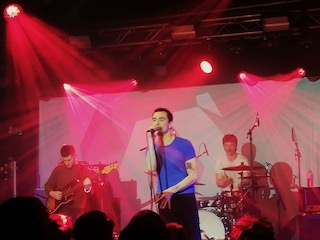 Nukuluk were an interesting pop/rap hybrid, if a bit subdued compared with some  acts. Lynks was the polar opposite - fast, funny, racy lyrics and dance routines set to 80s karoke rhythms, like Jane Fonda on speed. Lynks themself was a gloriously memorable figure, in full body skintight leopardskin, including face and beret… but somehow humble and endearing with it. Lots of friendly jokes about their straighter than usual audience, and accompanied by glamorous girl dancers, to subvert the grand drag queen nature of the show. Lynks has links with Grove, a Sunday highlight, but sadly they didn’t appear together.

A hike up to Komedia, a huge cinema/arts complex, well worth it for the excellent Hamish Hawk, now with full band. An unforgettable but again humble stage presence, with memorably poignant and unlikely songs like’ the Mauritian Badmington Champion 1973’ and ‘Bakerloo, Unbecoming’, potentially massive hits.

Then back to Chalk for a rare UK performance by Black Country New Road. Sadly having lost singer Isaac recently, they bravely elected to play only new songs, with every member sharing vocals and song writing. Wonderfully subtle and very folky in parts, the huge audience was nearly silent in even the queitest parts, followed by rapturous applause..apart from the man who asked me repeatedly if this really was BCNR, as it didn’t sounded so unlike their recorded stuff. they started with the kids from Fame - like Up Song, a group hug with the chorus ‘BCNR, Friends Forever’. Other intriguing new song titles included Across the Pond Friend and Turbines/Pigs, which was indeed apparently about both. Wonderful preparation for perhaps the most powerful and impressive set of the festival. 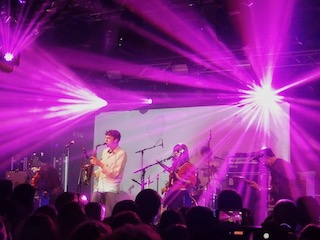 Shame I knew they would be lively, but their recent American tour had transformed them. Singer Charlie sported a curly perm, tight white t, faux American accent and an ironic sense of humour, introducing the band as fake minor celebrities and ‘this is one we wrote when we were all 7 and a half and living in a tent on the Cornish coast’. Exhausting to watch, he got onto every vantage point in the venue, including the bar top,then a very impressive stand on the shoulders of fans. More tracks from 2023 impending LP Food for Worms, plus all the favourites. Very hard to follow that, but up at the Hope Bad Breeding had a good try, ultra fast punk with crazy audience dancing. Xvoto were wonderfully theatrical, as befits former members of HMLTD. Dancers inflated condoms under one girls fishnet one-piece, creating disturbing spheres and shapes linked to pregnancy and abortion rights…possibly. It was getting late.

Sunday was one long after show party, with finally some overt politics, pretty essential in these hard times. Heavy Lung were very heavy, spending as much time in the audience as on the stage. I was singled out and kissed on the head by Danny Nedelko, for some reason! Scalping were part of the same Bristol gang, a techno Floyd audiovisual crazy trip, hypnotic and driving, all played live.

Bob Vylan headlined, also like Shame just back from a US tour, with Amyl and the Nitrates. They were very glad to be home and better understood! Amazing what they have achieved without any manager, agent or record label. Great live of course. They start with a sort of meditation and end with a stage full of fans. Vocalist Bobby is both warm and confrontational, almost at the same time. He obviously doesn’t like being grabbed by fans…fair enough. He even invited a local band to promote their gig and sing with him on Pretty Songs…unfortunately I didn’t catch the name, but they are at the Brunswick soon. Bob Vylan were amazing, but surprised and delighted to say even better, my highlight tonight was Grove. New to me, another confrontational London artist, also with lots of humour and humanity, and lots of solidarity with all those struggling. After a song about beheading unscrupulous landlords she pointed out was metaphorical, before commending good landlords and asking them to join housing coops. Great ragga and grime backings, most uplifting. A future tour with Bob Vylan perhaps? 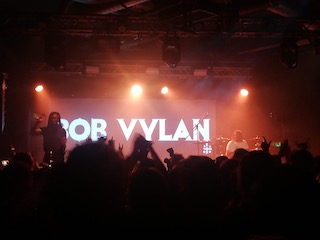 Truly an inspiring festival of new and original music.

And those answers? In order: 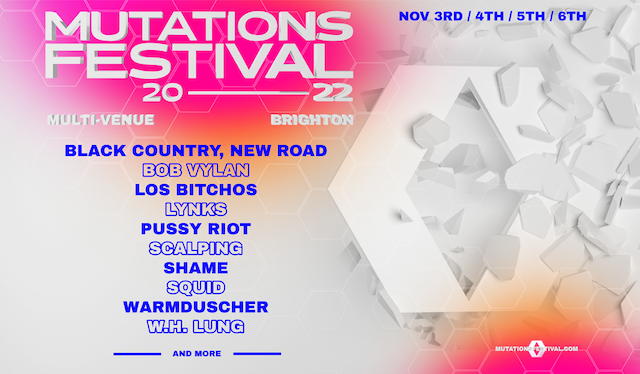