Tradfest 2020 proved that you do not need eye-catching big names to put on a quality festival program and attract an audience. The event, which has outgrown the Temple Bar area, gets many visitors from overseas, and quite a few shows were sold out in advance.

It is one of my favourite weeks of the year, where I get to be a tourist in my own town. I get the full festival experience, yet I can sleep in my own bed. There were many side events, from a TradKids program and a record fair to music films at the Irish Film Institute and food and whiskey trails.

I was in the audience for two live programs on RTÉ Radio 1: ‘Arena’ and the John Creedon Show, which had Fiachna Ó Braonáin subbing as presenter. They were great shows with excellent live music. It gave me the chance to hear some acts whose gigs I was not going to. I saw Lisa Lambe, Daoirí Farrell, Aoife Scott (who was launching her Ron Block-produced album), Cua and an interesting collaboration, commissioned by the festival, between Lemoncello, the Silken Same and poet Stephen James Smith.

As for the gigs proper, these were the highlights:

1. HOTHOUSE FLOWERS
I have liked them since seeing them in the interval of the 1988 Eurovision Song Contest, but I have to admit that I got a ticket for this particular triple bill at the Olympia because I wanted to see Jon Boden. It is the sign of a great band when, even though you have seen them many times over the years, they can suddenly take you by surprise with a brilliant performance. Liam Ó Maonlaí was on flying form, reminding us why he is still “the best white boy soul singer in the world”, as Bono once described him.

They played long versions of songs from their back catalogue, with improvised parts reminiscent of early Van Morrison. The band were joined by fiddle player Clare Sands for the entire gig, and she added an extra dimension. It was my first encounter with Clare, a formidable talent. The interplay between the piano and the fiddle was really something. The show ended with ‘Don’t Go’, still as joyous as the first time I heard it at Eurovision.

2. TIM EDEY
Tim Edey is a musical genius who is jaw-droppingly good at several instruments - at once, thanks to a loop pedal. I first saw Tim during his short stint as guitarist for Lúnasa. Then by chance I was at a session at John Benny’s pub in Dingle and discovered that he is also a master on the accordion. Nowadays Tim tours with a one man show, in which he sings as well, and on top of all that he is funny as hell. Tim explained that he had recently decided to give vaping a go for the first time, aged 40, which had not gone well. A sore throat meant that he was only able to sing one song. Tim talked about his inspirations, Steve Cooney and Django Reinhardt, and received two standing ovations at the end of this lunchtime concert at the Pepper Cannister Church.

3. SEAMIE O’DOWD
I was delighted to see a solo show by Seamie on the Tradfest program. I know his playing from seeing him with the Unwanted and the Máirtín O’Connor Band, but on those occasions I always wished that he would be given more of a chance to shine. So here was a full hour with the man; a sold out lunchtime show at the City Hall. Seamie played guitar, harmonica, fiddle and sang. Some of the material was quite bluesy, some trad. A set of jigs (or reels?) on the acoustic guitar was especially intricate, fast and mega-impressive.

4. MARY BERGIN
I am a lover of flute music (Michael McGoldrick, Brian Finnegan, Matt Molloy) and I took tin whistle lessons at Walton’s School of Music for several years. I was therefore very much aware of Mary Bergin’s status as the godmother of tin whistle players, but I had never had the opportunity to hear her play before. This was a real treat. The tin whistle is a beautiful and versatile instrument when played so expertly. Mary was accompanied by Mick Conneely on bouzouki.

5. KATIE THEASBY
Katie Theasby’s performance was part of a show at Lost Lane, a new venue in what used to be Lillie’s Bordello. Also on the bill were Saoirse Casey (I guessed the family connection as soon as I saw her, and my neighbour confirmed that she is Paddy’s daughter), Emma Langford and the aforementioned Clare Sands. I liked the fact that this was not advertized as a female gig and the girls never referred to it. Just four excellent musicians who happened to be female, which is as it should be.

Katie Theasby is a Londoner (“I was born in county Camden”) and she has a beautiful deep voice. A very relaxed and confident stage presence, she played the flute as well and was accompanied on guitar by the man who produced her album, ‘I Remember You Singing’. Her song ‘Come Up The Stairs Molly O’ has been playing in my head ever since the show.

6. MUIREANN NIC AMHLAOIBH & GERRY O’ BEIRNE
Another act that can be hard enough to catch live in the capital. Gerry O’Beirne is an amazing guitarist, whose album ‘The Bog Bodies And Other Stories’ is a hidden treasure I often listen to late at night. Muireann Nic Amhlaoibh was of course the singer with Danú and she is also a presenter of Irish language music programmes, as well as a flute player (another one). Together they presented a superb night of music at a sold out City Hall. The audience included Gerry’s 100 year old mother.

7. JON BODEN & THE REMNANT KINGS
Bellowhead were one of the best live bands ever and I am a big fan of everything Jon Boden does (Spiers & Boden, ‘A Folk Song A Day’, his solo albums). And yet I felt this show at the Olympia did not quite take off. Jon brought a great band that included Sam Sweeney and Ben Nicholls. They played some songs from Jon’s prog-folkish concept albums and some traditionals. I could not fault anything and yet I had expected more. Will everything Jon does always be measured against Bellowhead? At the Jon Creedon radio program I saw Jon do three songs solo and I actually enjoyed those more.

8. CLARE SANDS
After seeing Clare guesting with the Hothouse Flowers I was curious to see her own show. She was accompanied by a harp player. Clare herself played fiddle, guitar and harmonica and sang. Her set included a John Spillane cover and some quite bluesy material. Clare is from Cork and she sings in her own accent, as do David Keenan and Junior Brother amongst others - a very welcome development, especially as there is some suggestion that regional accents are disappearing in this over-connected world. Every year Tradfest throws up at least one new discovery for me, and Clare Sands was this year’s.

9. NIALL HANNA
Niall is a folk singer and guitarist from Co. Tyrone whose name I had come across I can’t remember where. I saw Niall at one of the pub gigs, in the lovely back room of the Palace Bar on Saturday afternoon during the fest. It was a perfect occasion. It was busy but not so packed that you could not see or hear. A great choice of songs, including ‘Red Haired Mary’ and ‘The Wild Mountain Thyme’.

10. DOIREANN GLACKIN & SARAH FLYNN
The most trad of all the shows I attended. Doireann and Sarah are a young fiddle and concertina duo from the Northside of Dublin. Their debut album ‘The Housekeepers’ is a project which explores the music of female traditional musicians during the 20th century. Some of these musicians were recorded (Alan Lomax was mentioned), but they are largely unrecognized. The girls did extensive research and met with surviving family members, which they talked about during the gig. Top class trad! John Francis Flynn, who appears on their album, was in the audience. 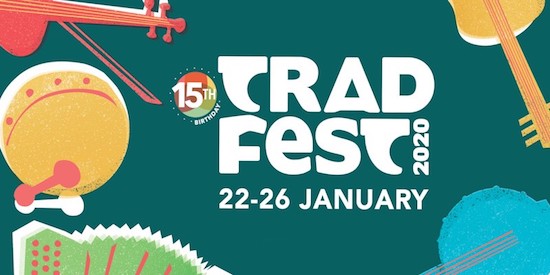