Our second visit to this festival in Northern Spain, on a mountainside just outside the beautiful city of Bilbao in the Basque region of Spain. Camping is available but with the festival running til the early hours we opt for the Festicket package which includes a city-centre hotel, well served by local busses and the courtesy festival bus back to the city in the wee hours.

Organisation is excellent. Not for the first time I find overseas festivals are ahead of those in the UK in terms of their ‘cashless’ approach. At BBK the wristband incorporates a chip which can be loaded with money from the app and allows for all food drink, merch purchases to be cashless. The system is convenient (I actually loaded my wristband before departing from UK) and ensures queues are kept to a minimum.

The stage layout was the same as our previous visit in 2017, except the stage names had changed, this time round not carrying labels from the sponsors. That said, Heineken were still prominent in terms of beer availability but a welcome addition was The Beer House, serving craft beer including an excellent 6.5% strength Lagunitas IPA. But quality comes at a price .... a large beer was €11, actually more than a pint, but led to more frequent wristband top-us than I’d anticipated.

The line-up is a mix of excellent indie fare with a strong smattering of Spanish bands giving a fresh variation. For me the festival was characterised by the wide variance of styles of banter from the UK/US bands. It was mostly awful with the odd exception, like the multi-lingual John Grant who had the grace to do almost all his between-song chat in Spanish.

At the other end of the scale, Julian Casablancas (Strokes) has still not mastered any aspect of talking to the audience despite, more than 15 years playing to huge adoring crowds. Likewise Liam Gallagher who, notwithstanding the largely Spanish audience, could conjure up nothing more imaginative than the familiar ‘Is anyone here from MAN–CHUS-TAR ?’. And I can’t help thinking the otherwise articulate Charlie Steen from Shame could really do a bit better than ‘Muchas Fucking Gracias’ after every song. Conversely, Sleaford Mods don’t compromise their style one bit and carry it off really well, as described in my brief write up below amongst the 24 bands we saw over the weekend.

EraBatera (Bestuan – second stage) Six piece collective, the new project by Gaizka Salazar, the drummer from a band called Gatibu. Luscious guitars supplemented by a crooning vocal. Gaizka certainly drummed with enthusiasm and gave the impression he was delighted his songs on his ‘Antipodean’ album were given full flight

Psychotic Monks (Txiki – fourth stage) Youthful and energetic French quartet. Most interesting band so far. Drummer on rider centre stage but side-on. All contribute to vocals. Some songs very much in the construct of Idles. These young men are just as angst-ridden but deliver message in a less shouty way. Other songs reminiscent of Sex Pistols vibe but no two-minute punk blasts from these boys, they extend their numbers usually culminating in clever guitar breaks which The Fall would be proud of.

John Grant (Bestuan)  who paid the assembled the courtesy of speaking in Spanish. A wonderful 45 minute set. Budgie (drums) was in usual entertaining form. You felt the whole band had a real connection with the crowd. Treated us to some old favourites like Marz, Glazier, GNF and a very special Queen Of Denmark*

Vetusta Morla (Nagusia) - Spanish is a wonderful poetic language and it’s a delight to spend a few days in a city that has not become homogenised with American English. But (in my humble opinion) the Iberian lingua franca simply doesn’t suit rock n roll. Vetusta Moria provide interesting sounds via keyboard and guitars but the songs go downhill as soon as the Spanish vocal kicks in.

Sleaford Mods (Gorai stage – third biggest stage, inside a large open sided tent) . This was a clash with Nils Frahm. For those who appreciate the subtleties of the rock n roll muse a clash that presents something of a no-brainer : NF every time - but we have had wonderful moments with NF earlier in the year, and experience so far of the chatty crowd at the Bestuan stage led us to opt for SM. I must confess I was intrigued to witness how this unique style would map across to a continental audience but they lapped it up, every last “Yaba Yaba Yaba Fuck Off....”. No compromise in Jason Williamson’s anglo-saxon delivery, makes me wonder whether there will be a generation of Spanish folk who, when speaking English, pronounce expletives in a thick Nottinghamshire lilt. I particularly liked JW’s sign off line: “We are The Sleaford Mods, not to be confused with every-fucking-thing else “

Liam Gallagher (Nagusia). Plenty of Oasis songs in the set (RnR Star, Slideaway, Cigs and Alcohol) though his recent solo efforts somehow sounded slightly crisper. The usual swagger throughout, though Roll With It was introduced self-deprecatingly as ‘the shitest song ever recorded‘ The crowd pleasing got cranked up by the end of the set with a singalong rendition of ‘Wonderwall’ which we heard from a distance as we made our way to the bar  .

Thom Yorke - performing ‘Tomorrow’s Modern Boxes’ (Bestuan). No need for TY to lean on his band’s back catalogue. A stunning set with tunes varying from dance grooves to samba beats to (of course) Radiohead-like wailing. TY moved around the stage playing keys, bass and vocal giving a visual angle to proceedings though hardly necessary given the stunning light projections on the back-drop which started with brilliant simplicity and developed into a panoply of colourscapes.

The Voidz (Txiki). When you have a 2.00 a.m. slot, coming on half hour late is particularly irksome. Sound quality was poor for the first number and sadly didn’t improve. This is Julian Casablancas’ side-project. He commented on social media the following day ‘I hope you enjoyed the jam session’, an expression if ever one was needed that they weren’t taking this too seriously

Second (Bestuan). From Murcia, and with nine albums under their belt a notorious Spanish indie band. Watched them from our bar stools at the ‘Beer Factory’ while supping their excellent Lagunitas IPA. Felt like we were in a VIP area - at €11 a pint deservedly so.

Uniforms (Gorai) – Three girls Natalia, Pan, Anna all hailing from Spain with a dude on bass. Really enjoyable set and the most promising find of the festival – debut album ‘Polara’ is one to check out.

Brockhampton (Nagusia) - I want to describe this as ‘boy-band rapping’ but that doesn’t do them justice; this is accomplished performance art. The stage is set up with tiered benches and plenty of jet-steam. Had the crowd rapt, with pit circles galore.

Idles (Bestean) - Best set of the weekend. Anarchy from the off with the band crowd-surfing in the very first number. Having seen this band at this same festival two years ago (but then on a very small stage) it was great to witness their progression and to see the Iberian crowd enjoying the punk-fuelled excitement

Rosalia (Nagusia) - From Catalonia, mixing pop urban and flamenco in a complete show - it’s not Idles though is it?

Suede (Bestean) – Brett Anderson and team on good form, showcasing a number of tracks from their 2019 album ‘The Blue Hour’ with older hits thrown in

The Strokes (Nagusia) – Simply awesome. Kicking off at 1.35 a.m. but sending incomparable levels of energy across the site. The set was the same as All Points East London a few weeks earlier but this time with no sound limitations. The band appeared more relaxed and galloped through 19 songs pretty much all from their first two albums. One or two small aberrations, notably a mucked up intro to ‘On The Other Side’ but this was as near to rock n roll perfection you can get.

Nadia Rose (Bestean) – a 10-minute DJ introduction before she took the stage. Nadia is from South London and has Stormzy amongst her supporters; and you can see why - a highly confident young lady, bounding onto the stage and completely at ease directing the crowd as the DJ played backing tracks on the decks. This is urban Sleaford Mods. Perhaps she just needs to sharpen up the banter : “I gotta new single out ‘Airplane Mode’ – I had to fly to get here so it’s very fitting” and at the conclusion of the song: “My Spanish is a bit rusty but.......... Gracias ??”. This was the first act today on this sizeable arena and was a big space to fill. Nadia made a very good fist of it. One to watch

Nathy Peluso (Nagusia) – Argentinian artist now settled in Madrid so dovetailed nicely with a number of acts at the festival, but in common with other Spanish-rooted acts on the bill this is a binary revolution against their embedded culture without necessarily creating a new culture or sound of their own. Never better exemplified than by Nathy Peluso

Viagra Boys (Txiki) – Hailed in the programme as tongue-in-cheek Swedish punk, so perhaps we shouldn’t have been surprised to see sax and keys as part of the 6-strong line-up. Couldn’t make my mind up if they were really interesting or really awful. Lots of stage histrionics including lobbing a half-drank tin of beer into the crowd and rolling around the stage, but somehow they didn’t have the songs to match.

Boy Azooga (Firestone) – First time in Spain and really humbled that so many people gathered at the small Firestone stage (particularly as Weezer were on the main stage at this time). Lots of “muchas gracias-es” but truth be told this was mostly an English and Welsh audience (plus Connor a big fan from Glasgow) who were very familiar with the tunes from their 2018 ‘!, 2, Kung Fu’ album. Played a new song which was excellent. Finished with Loner Boogie, top tune

Shame (Txiki) – played some new songs including an excellent one called ‘Salutation’. Introduced ‘One Rizla’ as the first tune they ever wrote – and one I suspect they’ll never surpass. The usual dose of performance anarchy. Great fun

Hot Chip (Nagusia) – Can’t think of a better band to conclude the weekend’s proceedings. Their latest album ‘A Bath Full Of Ecstasy’ is one of the best releases this year and this band complement their superb brand of dance-indie with performance both polished and professional. A wonderful reaction from the crowd left us dancing into the small hours.

*John Grant kindly dedicated Queen of Denmark to us. Entirely unprompted (and unexpected), following a conversation we had with him in a Bilbao restaurant the previous evening 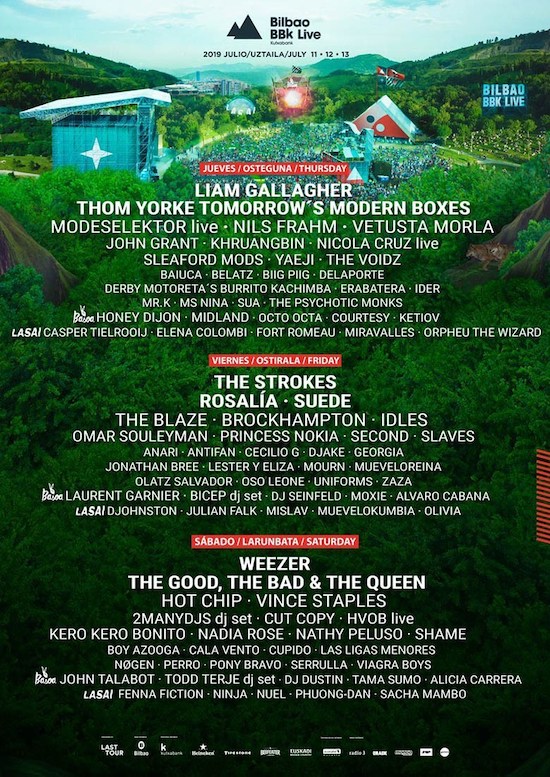