Glastonbury has bitten the dust for another year. Dust it was, in a record year of blazingly hot weather with no rain and no mud! Glasto relocated to the Costa del Rave! These are my highlights for this year’s festival.

Wednesday we spent travelling, setting up camp and exploring a few bars.

On Thursday morning there was no lie in as the morning sun turns the inside of the tent into a sauna by 8:30! None of the main stages are on until the Friday so it’s time to explore old haunts and see what has changed since two years ago. To those who haven’t been to Glastonbury in recent years it’s difficult to get across what a vast magical land this is! A pop up city of 200,000 people with over 100 stages and streets lined with hundreds of shops, bars and food outlets. Areas can be crowded like London in the rush hour, but you can always find a tranquil corner to chill

Headed to the Greenpeace Stage to catch Beans On Toast but couldn’t get near. Because the main stages were not open these other areas were unusually crowded. So, decided to go to the lounging hills above the Park to lie in the sun, enjoy the stunning view and have a few beers.

In the afternoon the Woman’s World Cup England against Norway match was screened on West Holts Stage. Brilliant and exciting match! The Glasto crowd were featured on the BBC coverage at half time. Made our way to the stone circus field to see the fireworks in the evening. After the burning of a large Phoenix like wooden structure the sky was lit up with a dazzling display of colours.

Later that night we set out for the Rum Shack in Block 9 with it’s real party atmosphere. Barney Artist was on stage with a trumpeter accompanying his Hip Hop and Rap. Really got the crowd going. Had a few rums called New Dawn recommended by the barman and which were superb. It was made even better by the generous measures they were pouring!

My first band were Lankum on the Park Stage. An Irish folk band from Dublin. They were excellent. 4 multi talented musicians with some radical political banter. Listened to them with Helen who has written an excellent Glastonbury review on our website. She said they used to be called Lynch but had to change their name for the American market! Googling of the word lynch in America would have been a problem! After which we climbed the park hill to get some beer from my favourite bar Tricketts. It has real ale in barrels behind the bar and stunning views over the festival. Up on the hill you also catch the breeze which is a welcome relief in the heat of the day.

Billy Braggs Radical Round Up was on in the Left Field Stage. On stage were Billy Bragg, Emily Barker, Stella Donnelly and Connie Constance. They played songs with acoustic guitars to an appreciative audience sat on the grass in the tent. It was a special line up and wonderful to hear again the emerging talent of Stella Donnelly from W.A. She gave a very moving introduction to her numbers Beware Of The Dogs and Boys Will Be Boys.

Current Neil Young sidekicks Lukas Nelson and Promise Of The Real played on the Park Stage. The band put their heart and soul into a storming performance. They finished with Neil Young’s Rocking In The Free World (but made it a bit shorter than Neil’s normal 30min blast!)

Idles are great and their set on the Park stage didn’t disappoint. Punky rock with theatricals and much crows surfing. They were also to do a set in Shangri-La later that night. Michael Kiwanuka played at the Park Stage later that evening. He just gets better and better. Soulful songs with a superb band and backing vocals.

We then went on a tour of the late night areas of Block 9, Shangri-La and the Unfair Ground. Block 9 gets bigger and bigger and in now split into East and West. NYC Download and Genosys are still there but London Underground has gone. NYC Download is still based on a 1980’s gay club in a meat packing building in New York playing retro disco and dance. This time the upper stories are on fire! The new Icon stage is huge and features a large concrete head with VR headset spewing laser lights and patterns. Next to the Temple and behind a wall of rock we found a stunning DJ stage under a massive waterfall of coloured lights.

In Shangri-La the ShitTV studio was a bit shit when we went in. They were doing a talent show but the talent from the audience was a bit thin on the ground! The Unfair Ground was a weird as ever.

Saturday started with the surprise addition of Vampire Weekend on the Park stage. They were also due to be playing on the Pyramid Stage on Sunday.

Sons Of Kemet brought some serious jazz to the Park Stage that afternoon. We were later to hear more top Jazz in the Wormhole, built as a large treehouse, next to the BBC studios. The wooden building enriches the intimate atmosphere and sounds of the brass instruments.

Back to the Park Stage for another great surprise. Foals who were not billed to appear anywhere at the festival. Loved their set. Full of energy. Yannis took his guitar into the crowd during the number What Went Down.

Self Esteem played in the tiny venue that is the Crow’s Nest at the top of the Park hill. All the bands here are ‘secret’ as they are not announced until the day they are playing. Rebecca was brimming with confidence, and the two girls by her side providing beautiful harmonies.

Loved the new addition to the festival that’s Glastonbury On Sea. It’s a proper Edwardian style pier jutting out over a sea of tents from the hill by the Tipi field. With tons of structural steel and wooden planking, it must have cost a lot to build. Punch and Judy show, rock shop, amusement arcade, fortune teller and much more. Such imagination and love the entertainers all dressed up in costumes. A couple were dressed as lifeguards on the grassy beach amongst the deck chairs.

Back to the Park stage again. I spent most of the Friday and Saturday in this area with its 7 or so stages. It’s so good, the bands are awesome and it’s not too crowded. Kate Tempest was on and performed her new album The Book Of Traps And Lessons. Only caught the last half but it was sublime. Poetry to music enhanced by her vocally rapping rhythms.

And finally also at the Park stage! Hot Chip. I’ve seen them a few times, but this was the best. Everyone was moving. Georgia who had played on Friday guested with them. Also guesting was Kieran from Four Tet.

Sunday started with three solid performances on Williams Green stage from Boy Azooga, Gently Tender and Avi Buffalo. Went to the Tipi field to chill and sample some Chai and stumbled across John Fairhurst playing bluesy acoustic guitar. He was excellent.

Went to the Pyramid to catch Kylie but was too far back and didn’t really get into it. David Attenborough came on stage briefly beforehand and talked about the global plastic problem. He congratulated Glastonbury for not selling plastic bottles this year thereby saving 2 million bottles! Nick Cave came on to duet with Kylie to sing ‘Where The Wild Roses Grow’ and Chris Martin also appeared with acoustic guitar to do ‘Can’t Get You Out Of My Head’ with her. He had played that as a tribute the year she had to cancel her headline slot.

Then off to The Blue Aeroplanes on the Avalon Stage. Entertaining set from this solid rock band accompanied with dance moves from Wojtek Dmochowski. Somehow, I found myself staying in the Avalon tent for Bananarama! It was cracking party music and a real guilty pleasure!

Now to the highlight of the festival. The Cure on the Pyramid Stage. It was so brilliant to have the festival finish on such a high! This was one of the best headliners I have seen at Glastonbury. Sometimes a performance is so good it gives you a tingly feeling. I had that in spades during their two hour set.

Then it was back to camp to drink, eat with friends and ruminate on how good Glastonbury 2019 has been. Now will we be able to get back for the 50th Glastonbury next year? That is the big question. 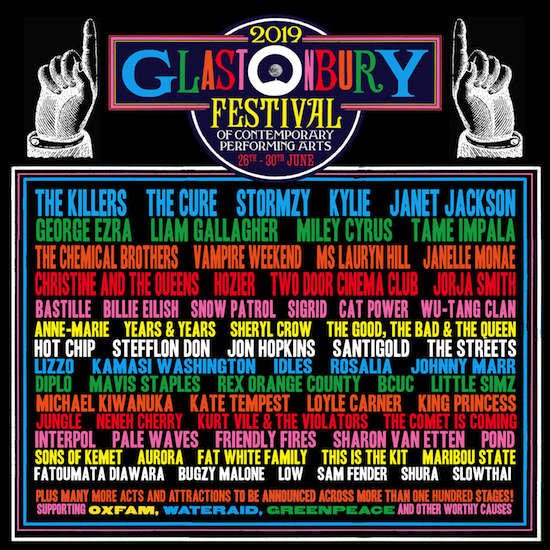