Not sure city centre day-long festivals are really for us.  It was 7.00 pm, halfway through Courtney Barnett’s set. Sally and I both dead on our feet having got to the fest at 1.00 pm to catch the early bands, and getting irritated by the swelling crowds across the site.

As we took a stroll in the direction of the main stage for the headline acts we took a brief detour to the ‘X stage’. Yak were not on our agenda today as we’d seem them three times recently but we thought we’d spend a few minutes watching them as we were passing... and wow... best set of the day. Lead singer and guitarist Ollie Burslem was on tip-top form and Elliot (drums) and Andy (bass) were equally on fire. The highly lively crowd added to the spectacle and we were treated to a raucous run-through of tunes from their recent ‘Pursuit Of Momentary Happiness’ album. The sheer force that is rock n roll ensured this high wasn’t momentary – it defined the day .......city-centre all dayers – bring 'em on !

On the event itself, there has been plenty of social media comment about the poor quality of sound for the headline Strokes set . For an event of this magnitude this is simply not acceptable. Prices in London are always going to be high, and £6.20 a pint drew criticism, though at least it was a decent Maltsmith IPA so better that, in my view, than (say) £5.50 for tasteless mainstream brand lager.
There are a number of APE days this summer. This one was the only one to have sold out, reflective of the breadth and quality of bands on offer. We caught 13 of them..

Billy No Mates (Jagerhaus stage) – a surprisingly large crowd. Guitar band with sax. The lead singer a young Roger Daltrey with added americana. After one song which contained rhyming lyrics ‘much’ and ‘touch’ he apologised for his norther accent !

Egyptian Blue (X stage) – signed to Yala Records who curated this stage today. We made a point of catching this band who’d we’d been introduced to a few weeks ago in Portsmouth. Angular guitars with Talking Heads vocal building to guitar sounds of Hawkwind proportions. With hints of British Sea Power these lads provide an intensity laced with a loada fun.

Dream Wife (North stage) – on the weekend the Spice Girls are playing their comeback gigs – here we had Dream Wife delivering girl power for 2019, through their punk-laced songs. A message never more relevant “I am not my body I am somebody”

Temples (West arena) – Temples have never changed their style - an archetypal looking rock band with an assortment of classic hair styles. I was really looking forward to this set but it was sadly marred by the sound being rather mushy. Set consisted mainly of songs from their excellent 2017 album ‘Volcano’ (my Rock Club No 1 album in my 2017 Top 10s). Enthusiastic crowd. Given the early afternoon sunshine the sweeping anthemic tunes may have suited an outside stage better.

Fat White Family (North stage) – caught this excellent band as we queued for a beer..... just as they were playing “Feet’ (from their 2019 offering Serfs Up ) second best song of 2019*

Valeras (Firestone stage) – The girls: bassist and lead singer was centre stage flanked by guitarists of varying moodiness..... made their smiles ever more beautiful when they occasionally cracked into one. The boys: a further guitar and drummer. 4th song in ‘Ricochet’ was introduced with ‘you may want to dance to this one’. The crowd duly obliged

Parquet Courts (East stage) - New York’s finest (well...... 2nd finest). Great to see ‘em do a set not entirely based around their hit-crammed first album. Opened with ‘Total Football’ followed by ‘Dust’ and featured the slower ‘Before The Water Gets Too High’, ‘Freebird II’ and‘Wide Awake’, the latter jerky song getting the crowd in particular ebullient and crowd-surfing mood. But to everyone’s delight they included crowd favourites ‘Master Of My Craft’, ‘Borrowed Thyme’ and set-closer ‘Light Up Gold’. Never stinting on their performance this is a truly brilliant band.

Balcony (Firestone stage) – wrote this while we were queuing for a bite, out of sight of the stage: ‘moody rhythms with husky female vocal’. Turned out to be a male vocalist.... still husky though

Courtney Barnett (North stage) – Her dull-toned vocal sounded a little tired (or maybe we were just a bit tired of it). Best songs were the ones with extended guitar breaks

Yak (X stage) – the now familiar vocal through the loud hailer set the tone for this raucous, energy lifting set. The band was today complemented by a 3-strong brass ensemble. Early highlight ’White Male Carnivore’ drew an unrestrained reaction from the crowd which continued through the remainder of this pulsating set. Further high spots were hit with ‘Words Fail Me’ and ‘Blinded By The Lies. A great band, providing best set of the day

Raconteurs (East stage) – the Brendon Benson/Jack White chemistry allowed us to maintain the euphoria from the Yak set. Professional in every respect. Slightly annoying levels of chatter during some of the instrumental breaks (folks just there waiting for The Strokes). Excellent set apart from the fact they didn’t do my favourite ‘Carolina Drama’

The Strokes (East stage) – New York's finest. The sound in the front segment was simply not loud enough and alongside justified complaints on this score were comments that the band were just going through the motions. I don’t subscribe to this viewpoint. We moved back halfway through the set to a spot where the sound was stronger and crystal clear, and there was no doubt the band were in full flow through their excellent repertoire. A little frustrating to have interludes between songs, but frankly with belter after belter you just needed a few moments to get your breath back. Definitely one of those sets where you thought ‘they’ve done all their good ones’ when they pulled out another classic... and another... and another.... ... The set was mostly based around first 2 albums with Razorblade a notable highlight not from their early work.

Weary and homeward bound, with ‘Is This It’ running through our heads... and thoughts wandering to the fantastic songs The Strokes left out. 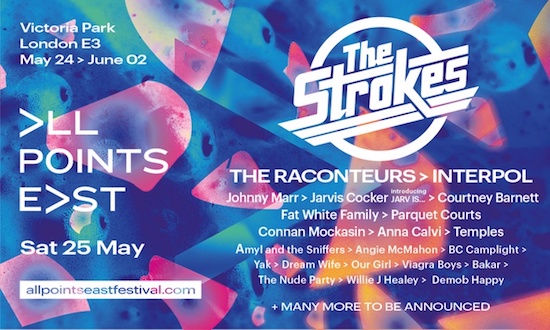