The annual Tradfest took place in Dublin last month. Always a treat to have some great concerts at the bleakest time of year and this year's edition was better than ever. The event that started as the Temple Bar Tradfest in 2005 has moved more and more out of Temple Bar and has expanded to include all kinds of roots music.

Music fans travel over from mainland Europe and the U.S. for this event and so, despite it taking places in venues dotted around the city, there is a festival vibe, as you keep seeing the same faces. The venues are one of the main attractions of the festival. While some conventional venues are used, the gigs mainly take place in churches and historical buildings. These places do not have drink licenses and thus guarantee a fantastic listening experience, with no talking through the music whatsoever.

“I have to say that our recent gig in St Michan's Church as part of Tradfest 2019 in Dublin was one of the highlights of recent years for me and the band. Great audience, amazing sound and lights, wonderful Green Room facilities, super guests from Virginia, Dori Freeman and Nick Falk, and a general air of "we're here for the music"..... Oh, and for a great audience to sit and enjoy a fully-original set of songs and tunes, well, this is the epitome of what a good gig should be, and hopefully, there will be many more like this in the future! The venue: 100% perfect. Great to see Tradfest getting to use some of the great architectural treasures of our capital city.”
(Niall Toner on Facebook)

I was at his show and I fully agree with Niall. I am in the habit of scoring my festival gigs out of 5 and in fact every show I attended scored a 4 or higher. This was all the more surprising as there were no big names that jumped out at me straightaway this year (as in previous years when they had Maria McKee, Bellowhead, Steve Wickham). I initially picked only two shows to attend but then gradually started adding. Here is what I saw, ranked from most impressive to marginally less but still very impressive:

The City Assembly House is on South William Street, opposite Grogan's Pub. It is an art gallery with a lovely performance space upstairs: A large bright room with excellent acoustics. Daoirí himself stood at the door to greet attendees and his proud father was sitting in the front row, chatting to everyone. I have been a fan of Daoirí since first seeing him open for Solas in Whelans a good few years ago. He played songs from his two solo albums, from the album he recorded with Four Winds and also from his upcoming Dónal Lunny-produced album, which Daoirí described as a dream come true. I had a hard time picking a number one, as the first five gigs on this list were all super. I went with Daoirí because I loved the simplicity of his show: One man and a bouzouki, an amazing singing voice, great songs and plenty of humour.

“Sometimes you get a real find”, an enthusiastic lady once said to me at Cambridge Folk Festival. She was very drunk, but I knew exactly what she meant. Susan O'Neill was The Discovery of the festival for me. She played four songs at the Live at the Hub late night gig at the Old Storehouse on Thursday night. I was blown away and went to see a full show at The Oak on Saturday afternoon. Susan is a one-woman band, originally from Ennis. She has an amazing voice, an impressive stage presence, good original songs and she uses the loop pedal (which I am not a fan of) to great effect. I have a feeling that in years to come I will be talking about when I first saw Susan O'Neill; she is that good. 'Found myself lost' and 'Only animals' are the standout songs for me. Her covers are equally good. I was already loving the gig when she sang Tom Waits' 'Martha', one of my favourite songs ever. She also led the entire pub through a lovely singalong on Bob Dylan's 'Blowing in the wind'. I have since looked Susan up online and it is no surprise to me that she has connected with Sharon Shannon and is touring with her.

I am a big Lankum fan but this was the first opportunity for me to see Radie solo. I have seen her with Rue and with Katie Kim and listened to interviews in which she talks about how she finds songs and I find all of that fascinating. At this gig she played some songs I had heard her do with Rue or on YouTube, and others that were new to me. She played concertina, that enormous Russian accordion, guitar and – my favourite – the harmonium. There was quite a major upset when the electric guitar amp buzzed loudly and it became apparent that it was unusable. This obviously threw Radie, who said she would have to rearrange the entire set, as she had planned quite a few songs on the electric guitar. Daragh Lynch walked up and lend her his acoustic End-Direct-Provision guitar. I don't think anyone in the audience minded the change of program as Radie sounded great on the acoustic guitar. Daragh joined her for 'Hares on the mountain' and Lisa O'Neill guested on 'Dirty old town'. Finally Radie's sister came onstage for an instrumental set, bringing the trad back to Tradfest.

Dori Freeman was a new name for me. When checking out acts I listened to her 'Live on KEXP' set on YouTube and I decided I should go and see her. Dori is from Virginia and her style is best described as Appalachian. She had two albums out produced by Teddy Thompson with a third one on the way. Dori has a beautiful voice, which she never seems to have to strain. Linda Ronstadt comes to mind as a comparison. Dori performs with her drummer husband Nick Falk. Their harmony singing is worthy of Gram-and-Emmylou comparison. I am no expert on drumming but Nick got wonderful sounds out of what looked like a very simple kit and his style seems really unique, particularly for country music. Dori is an accomplished songwriter and the gig also included some great covers, including Loudon Wainwright's 'Pretty little Martha'. Dori will be back in Ireland for the Kilkenny Roots Festival.

Martin played a lunchtime show at the Pepper Cannister Church, which is a lovely place to catch a gig. Support came from poet/spoken word artist Stephen James Smith (best known for 'My Ireland') and it became apparent that the two men had really bonded in the short time before the gig. They performed several songs together. Martin is first and foremost a master guitarist, but also a travelling troubadour and a great storyteller. I loved his stories. One was about a tour of Britain specifically to places that see few gigs, where an 80-year-old venue owner gave Martin some pound coins for the meter. He also talked about two dangerous-looking bikers who got to know his music through listening to Bob Harris (whom I recently have started listening to myself. I was worried that this was an age-thing, until I remembered that as a teenager I used to listen to a country program on very untrendy Dutch evangelical broadcaster the 'EO', so I have just come full circle...). There was a real feel-good vibe about this gig and everybody left smiling.

Niall Toner is a veteran Irish bluegrass musician, who I had only seen once before, when he played a solo show at the sadly defunct Dún Laoghaire Festival of World Cultures. For this gig Niall had a full band with him, and what a fabulous band that is (guitar, standing bass, banjo and mandolin). All band members were given a chance to shine individually and the banjo and mandolin instrumental piece by the two younger band members was a real highlight. The entire gig was made up of original material, which was really strong. I will definitely go and see them again given the chance.

As a Cambridge regular I have seen Kate many times, but festival sets are short, so I was looking forward to catching a full concert in the beautiful St Patrick's Cathedral. I arrived early for a front row seat, but this was a mixed blessing. I could see really well and the interaction between Kate and husband Damien O'Kane is always interesting, but unfortunately the sound was very echo-y. The band themselves commented on the six second reverb. My neighbour reported much better sound further back. As the gig was seated and sold out I just had to sit it out. I have been to concerts at St Patrick's before and never had this problem (Julie Fowlis' gig would have had a very similar band set up). All the same it was an entertaining show. Kate's chat is very charming and of course she has a beautiful voice. The band, Damien excepted, was rather anonymous. I missed the friends that always accompany Kate at Cambridge. Michael McGoldrick was playing his own gig across town.

There is not a huge amount of trad to be heard at Tradfest, however the lunchtime recitals at the Dublin City Hall are as trad as you can get and present a rare opportunity to experience this kind of music in the capital. Brenda is a concertina player from County Meath. She had three different concertinas with her. This was hardcore trad. I loved it and bought her CD, 'Indeedin' you needn't bother'. The one deviation from the instrumental sets was 'The last trip home', a lovely song Brenda started singing when her horse died. The audience joined in and it was a great moment. Tradfest's artistic directed Kieran Hanrahan commented afterwards that he doubted we would see a better gig all weekend.

A lunchtime sell out gig from piper Mark Redmond and multi-instrumentalist Patrick Fitzpatrick. This was a really varied gig, including a whistle duet and sets where Patrick played clarinet and bass clarinet. Fabulous musicianship and a collaboration that worked on all levels. The men received a prolonged standing ovation and had their photo taken with the Lord Mayor after the show.

John Creedon's RTE radio program came live from the House of Lords on Tuesday 22 January. As John Creedon was on holidays we had the pleasure of Fiachna Ó Braonáin presenting. The show was made up of guests who would feature during the fest, who all got to play three songs each, with the exception of Lindisfarne, who joined for an interview.

I got to hear some great acts who I did not have the chance to see again. Best of all was Loah, who described herself as a “two sim” (person with two sim cards, as she grew up between Ireland and Sierra Leone) and who I will for sure check out further.

The Black Feathers are a duo based in Cirencester. Two very strong vocalists; they reminded me of the Civil Wars. They did a very imaginative cover of 'Spirit in the sky'.
Eleanor McEvoy is a veteran singer/songwriter who I had not seen for a long time and it was great to get reacquainted.

Seána Davey & Stephen Doherty are a harp and flute duo, who played some great trad sets. Always a pleasure to hear some harp music as I do not come across it that often.

Ré are a trad supergroup, consisting of Liam Ó Maonlaí, Peter O'Toole, Cormac Begley, Maitiú O Casaide and Eithne Ní Chatháin (Inni-K). It is always nice to hear them but I do think Ré are a case of the whole not being greater than the sum of its parts. 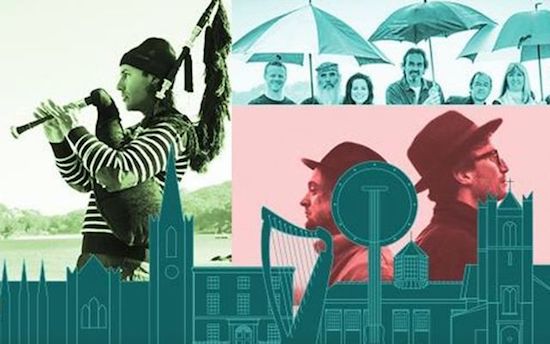