An inexpensive festival across just five venues along Albert Street, Southsea featuring under-the-radar bands, many from the locality with a small number from further afield. This year’s event had a charitable heart, all proceeds going to Mental Health causes.

Libra Libra – Beth Cannon have featured recently in Simon Raymond’s ‘Lost Horizons’ troupe. Taking lead vocal in this band, she produces a far noisier output compared to the LH tunes, with pumping bass, drum and guitar. The red lighting in the venue gave an impression of rock n roll in a bordello perfectly complementing Beth’s orange hair and blue and red silk gown, Early part of the set was reminiscent of late 70s female punk, interwoven with more a tuneful and sensitive side as in excellent song ‘ Witch Hunt’

Lauran Hibberd – from the Isle of Wight. Pointed out that her name is spelt with an ‘A’ – apparently her dad spelt it wrong on the birth certificate... and her mum never lets him forget it. With a band, had the demeanour of a pop starlet but gave us a set crammed with indie tunes. Good chat between songs particularly upon introducing ‘TV Show’ a song about losing a suitcase on holiday and spending a week dressed in a combo of her mum and dad’s clothes. The tune had a guitar line reminiscent of Lou Reed’s ‘Sweet Jane’.

Bella Spinks – solo singer on keyboard. Occasionally sounded like Kate Bush, a lofty comparison, but some of her songs wouldn’t be out of place in a KB collection.

Violet Mud – Moody and dark, Ian Curtis style vocal with a band playing Floyd-style vibes. Final track was a superb guitar jam fusion. Afterwards I said to the guitarist ‘You are King Crimson for the new generation’. Funny you should say that’ he responded ‘I’m going to see them in Bournemouth tomorrow!’

Los Bichos – A perfectly named all-female 5-piece. Latin infused indie and did a cover of ‘Trapdoor’ by King Gizzard And The Wizard Lizard. Did a full half-hour set – a bit like Mariachi al Bronx I’m not sure I’d want it any longer.

Penelope Isles – one of the best discoveries we’ve made this year. Originally from the Isle of Man, now based in Brighton. Exude good taste through their love of The Thrills (lead singer Lilly has a self-penned Thrills tattoo). Great set - ‘Cut My Hair’ excellent song.

Frost – Pulsing electronics, a welcome counterbalance to much of the other music we consumed today

Estrons – from Wales. Unfortunately the Wedgewood Room was half empty and a rather chatty crowd was a distraction from their usual fiery guitar sound

Art School Girlfriend – Have had some radio play on Radio 1. Now based in Margate and due to take in the aptly named Tom Thumb Theatre on forthcoming tour. Atmospheric tunes and a great set to close our festival day. 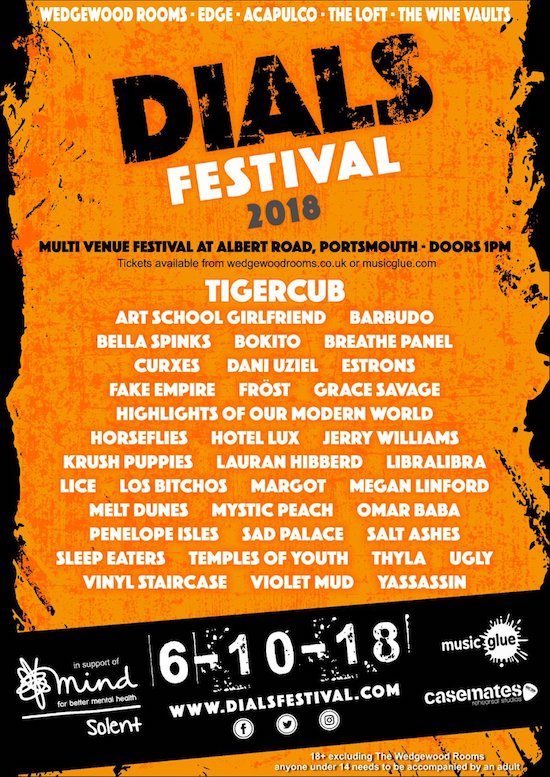