Last festival of the summer – the End Of The Road. A relatively small festival (boutique, I guess) with four music stages, on a very pretty site – Larmer Tree Gardens. The stages are perfectly placed; you can see and hear well from anywhere; peacocks roam about; the crowd are so well behaved you forget you are at a festival. The food looks great but comes at a price, and there is a huge assortment of drinks available, which even included normal beer this year.

We were blessed with the weather. The line up though was a curious affair. Very few names stood out for me at first glance. Music-wise this meant an  opportunity to try out new acts rather than sticking to the trusted and tried. I do stewarding at the End Of The Road, which is a nice way of being involved.

I still have not quite made up my mind about it all. The festival is so genteel; sometimes I feel I should not be there. On the one hand it is all nice and easy – no one pushing or shoving, showers are available, getting to the front for shows (because the majority of attendees will not stand for too long). But it is £13 for a festival mug, there is manicured grass with plastic matting weaved through and I missed big headliners that could bring a collective “wow” moment.

Last year the defining moment of the festival for me was Ian Lynch from Lankum asking the crowd, when introducing their song 'What Will We Do When We Have No Money', “Hands up who's on the dole?”, and only two people responded. This year's moment where I got doubts came during the Low Anthem, when their violin player earnestly announced that “Now we are going to play two songs about plankton”. A group of beer-bellied men in front of me started sniggering and in a way I was with them. But then I thought: Isn't it nice that in these unfriendly times there are people who choose to spend their time on something innocent? God bless the Low Anthem and good luck to them. I think that was my conclusive thought, even though their set was disappointing.

Great fun as always to hang out with festival buddies and RockClub colleagues. I also managed to see some comedy (really enjoyed John-Luke Roberts) and I attended two lovely events at the library stage, with writers Ian Marchant and Daniel Rachel.

The former has written 'A hero for high times: A younger reader's guide to the beats, hippies, freaks, punks, new age travellers and dog-on-a-rope crusties of the British Isles, 1956-1994', which I want to read. Ian explained that he picked the period 1956-1994, as that is from Elvis Presley ('The beginning of rock'n roll', as per John Peel, whom Ian quoted) to the start of New Labour. Ian argues that after that counter culture stopped. You still have pockets of resistance now, but no overall 'us against them' feeling. He wanted to describe for his granddaughter what that had been like.

Daniel Rachel wrote the award-winning 'Walls come tumbling down: The music and politics of Rock Against Racism, 2 Tone and Red Wedge' and talked about this with great knowledge and enthusiasm. I wished I could have fitted in more Library Stage events, but as always the call of the music was greater. These were my highlights:

How many genuine legends are there still alive? Here was one I was hugely excited about seeing. I had seen Cale live once before, in Nijmegen in the late 80s . All I remember is that he was solo with a piano that time, that I liked the gig and that he sang 'Heartbreak Hotel'. Another memory is being 17 years old and going to Arnhem (the 'big city') and buying The Velvet Underground & Nico on LP, because I kept reading about it. I loved the album. So a privilege to see John Cale again, so many years later. I was on the barrier for this gig.

He had a fantastic band with him; drummer Deantoni Parks, who played keyboards and electronic beats as well, bass player Joey Maramba, often attacking his bass with a string bow, and wide-smiling guitarist Dustin Boyer, who seemed thrilled to be there with the master. Songs that stood out for me were 'Helen Of Troy', a new song entitled 'The Legal Status Of Ice', a beautiful David Bowie cover ('Valentine's Day') and the lovely 'Emily'.

John Cale is 76. He was wearing an overall and looked as if he was pottering around the garage; a handsome man with a slight limp. I was most impressed by his singing voice. Cale is famous of course for the Velvet Underground, for being an avant garde musician, a viola player, producer of Patti Smith, the Stooges and Nico, but apart from all that he is a great singer. The goosebumps moment came at the end with 'I'm Waiting For The Man'. A song that was released before I was born and that today still sounds scary and intriguing. Festival gig of the summer for me.

Steve Earle has been name-dropping Colter Wall, so he had to be checked out. Colter Wall played the lovely Garden stage at noon on Saturday to a hugely appreciative crowd. He had his band with him, consisting of drums, bass, pedal steel and harmonica. Colter himself plays guitar but the most remarkable thing about him is his voice. He is only 23 but sounds at times like all of the Highwaymen, most of all Johnny Cash. He spoke modestly and entertainingly in between songs, talking about where he is from – Saskatchewan. His song 'Plain To See Plainsman' is fantastic (from a yet to be released album; Grammy prediction) and 'Kate McCannon' was another highlight. A huge talent; remember his name.

My only other must-see. Josienne and Ben are a folk duo who have released five albums and are currently signed to Rough Trade, no less. Ben is a great guitar player and Josienne a beautiful songwriter and singer with a great dry sense of humour. Her song 'Something Familiar' is a classic about the passing of time that always brings a lump to my throat. Their latest album 'Seedlings All' is a more experimental affair, Josienne explaining that Ben was going to play “one of those Ed Sheeran loop things, as he can't play two guitars at once”.

You can never go wrong with desert blues. I cannot pinpoint why, but ever since hearing Tinariwen for the first time I have loved this music. Imarhan are from Algeria. They played the Woods stage (the main outdoor stage at End Of The Road) on Sunday afternoon in blazing sunshine and it was just perfect. The band did not speak, apart from “thank you's” but played expertly and the audience loved them.

I came across Jim White during some last minute online research whilst staying in Bristol prior to the festival and it was lucky I did, because this music is exactly up my street. Someone I will definitely go and see again. Jim has been releasing music since 1997. He is a great songwriter and storyteller, who drew us all into a world far away from where we were stood listening. He had a guitarist and bass player with him but the drums came from a computer, which I found disappointing. I understand musicians face financial restrictions, but I'd say either bring a band or come solo – not half and half. That was the only quibble though.

First band I saw after my stewarding duties were over, with my first pint of the festival, so perhaps this coloured the experience. This duo from Poland play experimental music, with all kinds of sounds thrown in: Ambient, drone, dance rhythms and mellow vocals, sung in English. One of their tracks had caught my ear on a Mojo compilation CD and I was pleased I got the chance to see them at the End Of The Road.

More music that is hard to describe: Long drawn-out musical pieces with strange repetitive sounds, very hypnotizing. Daniel played an odd-shaped guitar and sang, in a lamenting high voice. His excellent band had a violin player, who got spooky sounds out off his instrument, a double bass player, plus Jim White on drums, whom I recognized from Xylouris White (and who plays in the Dirty Three alongside Bad Seed Warren Ellis). Apart from White the band members looked pale and impossibly thin. They played in bright sunshine on the Garden Stage and you wondered whether the sun would make them expire. This is love it or hate it-music. I loved it. Some of my friends did not like it at all.

With some time off between acts I wandered towards the Woods stage and heard a man with a guitar belting out a song. The End Of The Road can be all about atmosphere, restraint and cleverness, so it was refreshing to hear some heartfelt music that I would associate more with the kind of acts Frank Turner brings as supports. What's more, Patrick Stickles, the main man, had a stage presence and engaged with the crowd, again something not seen all that often over the weekend. Some hardcore fans down the front seemed to know all the songs and I will certainly investigate further. Patrick switched to piano and brought on a guitar player. I did not catch the entire gig but what I saw I liked very much. Titus Andronicus are from New Jersey and have been going since 2005.

A band I did not know apart from their name. They were the final act on the Garden Stage on Sunday night and they put on a joyous show - a mix of Southern rock, prog and a bit of country and metal. Possibly too much of a melting pot to keep my attention on CD, but good to experience live.

Sunny melodic Californiana, from singer/songwriter/multi-instrumentalist/producer Jonathan Wilson. He reminds me a bit of Jackson Browne, without the really good songs. Accompanied by a large band, this was perfectly pleasant.

Someone I have been aware of from a distance as an original and nicely eccentric musician. Gruff Rhys had a good slot, early evening on the Saturday night, and drew a large crowd. The set included some Welsh-language songs, Lily Cole duetted on 'Selfies In The Sunset' and they concluded with 'American Interior', from the wacky film of the same name I had the pleasure of seeing some years ago.

Duds are from Manchester and play Joy Division/Fall/Bunnymen-type music, with added percussion and brass instruments. Their songs have unconventional rhythms, they jump and clang and it is all very exciting and unique. Guitar-based rock, described in the festival programme as “a refreshing sonic slap to the face”. There are seven in the band, sometimes swapping instruments. Glad that out of the many young bands I did not know I opted to see them.

Trance-folk performed by an actual band rather than someone with a laptop. James Holden is a dance music producer/remixer turned bandleader. This was a late gig in the Big Top: Atmospheric sounds, with improvisations and unusual instrumentation. It was an experience as much as a gig, with long trippy pieces that kept building, and a good light show. There was curiously little dancing. This would go down a storm at Glastonbury.

Moor Mother (real name Camae Ayewa) is a poet, musician and activist from Philadelphia. Moor Mother talks and raps over noise and sound samples, creating strange, scary pieces of music. I would need a lyric sheet to be able to make sense of it all, but I enjoyed the sounds for what they were.

More noise, in this case from Leeds five-piece Hookworms. Reminiscent of Primal Scream, with a singer with a high-pitched shrieking voice, and keyboard and bass-heavy tunes. 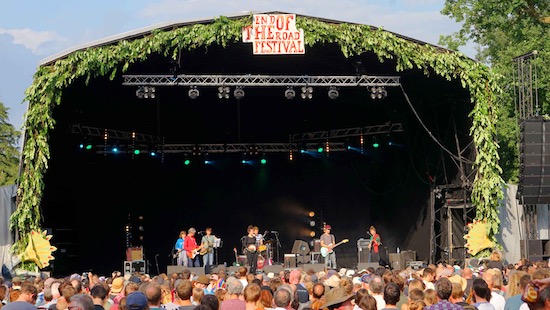