Back from the ever wonderful Cambridge Folk Festival. It was my 13th time there and Cambridge remains my favourite festival. A lovely site, a nice size festival, super friendly atmosphere, draught Guinness, clean toilets and best of all – the music.

To my knowledge this is the first ever entirely dry CFF I have been at, and not only was it dry but there was a heatwave on. I did not mind this at all, though it did get incredibly hot at Stage One in the evenings. Tap water was readily available at various points around the site.

Cambridge is part of “50:50 by 2022” gender balance pledge, but in fairness the gender divide has always been smaller in folk music than in other genres. No harm in actively promoting this though and my top 3 proves that the women came out on top effortlessly this year.

Only one quibble and it is quite a serious one. Sound overspill was a bigger problem than in previous years and it effectively impacted my enjoyment of some of the Stage Two acts. Beth Nielsen Chapman was completely drowned out by the Peatbog Fairies. I was not at John Moreland or Rosanne Cash, but apparently their sets had the same problem.

CFF is restricted by its size, as it takes place in a city park. The solution in my view is programming similar volume acts opposite one another. There was no problem with Elephant Sessions being on at the same time as Honeyfeet, because both are loud. Damien O'Kane and Ron Block's set was not spoilt by John Prine, as both are reasonably quiet.

These were the best shows I caught over the weekend:

I first came across Rhiannon when she performed at CFF with the Carolina Chocolate Drops a good few years ago and it was immediately apparent that this singer was something special. Rhiannon was guest curator this year, and if that was all she had done she would have done a fantastic job, but she topped this with an incredibly powerful performance. She was backed by her brilliant band, including Dirk Powell. When Rhiannon sang unaccompanied it was so quiet in the jam-packed tent that you could hear the hum of the speakers. Cambridge always has the best audience when it comes to listening. Highlights for me were the very moving song 'We Could Fly' and the wonderful singalong 'Up Above My Head'. Wow!

This was perfect pop and as a first generation Abba fan that really appeals to me. I also love the sound of siblings harmonizing and Klara and Johanna Söderberg do this wonderfully. Klara in particular has a voice as clear as a waterfall. There were heavier moments too. 'You Are The Problem Here' is an angry and powerful song about rape. The girls also do country very well, aided by pedal steel player Melvin Duffy. A cover of Kate Bush's 'Running Up That Hill' was a great surprise and then there were the hits: 'The Lion's Roar', 'King Of The World', 'My Silver Lining' and best of all, 'Emmylou', which is an absolutely perfect song in my view.

I am a huge admirer of Patti Smith. I have all her CDs, have read her wonderful books and I recently joined Instagram solely to be able to follow Patti's daily musings. A fabulous choice for the Saturday night headliner, even though Patti readily admitted that “folk music is not our forte”. She made up for that by covering Dylan's 'A Hard Rain's A-Gonna Fall', dedicating it to “our friends in Stockholm” and singing from a lyric sheet to make sure to get the words right this time. Another wonderful singalong, which Patti later on specifically thanked the audience for. I had seen Patti earlier this summer supporting Nick Cave in Dublin and setlist-wise that was a superior show for me, but lovely to have Patti at CFF and long may she continue to do what she does.

Daoirí is a ballad singer/bouzouki player from Dublin and I am a fan. For his Stage One show he was accompanied by Robbie Walsh on bodhrán and Blackie O'Connell on pipes. As a trio they can do the fast trad tunes that always go down so well with the CFF audience. I had also caught Daoirí's solo set at the Club Tent the previous night. Aware of the sound clash situation Daoirí wisely did his quieter songs early in the set, “before the banging starts”.

A wonderful instrumental show from Damien, Ron and friends. The friends included Michael McGoldrick, who always adds mega value for me. It was a fun show with much joking from Damien and superb banjo playing by both men. I liked it so much that I just had to get their CD ('Banjophony') at CFF's music stall, which was excellently stocked as always.

This was one of the acts selected by Rhiannon Giddens and what a superb choice. Birds Of Chicago are a husband and wife duo who play roots music (folk, soul, gospel). Both of them sing, Allison plays banjo and clarinet and JT plays guitar. Their band included guitarist/producer Steve Dawson. This set was the biggest surprise of the weekend for me. The finished with a great song, 'American Flowers', referencing the current situation across the Atlantic. They were joined by Darlingside for this one.

John Smith is a singer/songwriter I had long been curious about but somehow kept missing. John performed at Stage Two in the company of Sam Sweeney (fiddle) and Ben Nicholls (bass). A great performance, with new song 'Hummingbird' being a standout (best original song at next year's Folk Awards?).

Cambridge's favourite adopted sons returned and did not disappoint. Two years ago this vocal quartet from Massachusetts had “done a Pulp”, i.e. filled in a suddenly vacated main stage slot and had gone down a storm. They have a new album out and I liked the slightly proggier new material. Their CSN-style harmony-singing remained, as did Auyon Mukharji's humerous interludes, and once again Darlingside were around for the weekend and could be seen walking around the site, thoroughly enjoying the festival for themselves.

Another surprise discovery for me. Robert Vincent is from Liverpool and he does twangy country rock. His band included an excellent fiddle player as well as a great guitarist/pedal steel player. Robert came across as a humble unshowy musician and was on stage again later on Sunday with his fiddler accompanying Beth Nielsen Chapman. Q described this man as “the Scouse Springsteen”. A name to remember.

It took me a while to get into Stick In The Wheel but I like them now. A unique and modern take on folk music from an East London perspective; rough, rhythmic and modern. 'Seven Gypsies' is a variant of 'The Raggle Taggle Gypsy', and 'Over Again' is as fast-thumping as folk gets.

The Shee are a six woman band who celebrated their ten year anniversary recently. To mark this they asked some of their favourite musicians to write them a song, and during their show we were treated to pieces written by Karine Polwart, Brian Finnegan and Andy Cutting. Another unexpected highlight of CFF 2018.

Singer/songwriter Grace Petrie has a song called 'Revolutionary In The Wrong Time' in which she describes all the things she is not: “Not cool enough for Camden, too middle class for punk...” and which includes the line “I guess one day I'll just accept I'll never get on Cambridge Folk”. Well, here she was, and doing very well indeed. A song for her niece, 'Ivy', was a happy interlude amidst the protest-orientated material. I just wished Grace had talked a bit less so that she could have fitted in more songs.

Kate Rusby has such an easy-going stage presence that it feels like you are watching an old friend. Kate of course has a beautiful voice, a great catalogue and a superb band, although possibly more friends on stage than strictly necessary. With folk and trad I always find that less is more and I probably would have preferred a pared down version. That said, I thoroughly enjoyed her show, which included 'I Courted A Sailor', 'Underneath The Stars' and a lovely song that was new to me, 'Only Desire What You Have' (from the album 'Life In A Paper Boat').

Brighde is a piper from the Isle of Skye. She performed on Stage One accompanied by Lau's Aidan O'Rourke and guitarist Jenn Butterworth (who also performed at the festival as part of Kinnaris Quartet). Probably the most trad set I caught over the weekend. Liked it very much.

Saul is the melodeon player son of one of my festival friends. Impressively he has skipped the Den (though he did also play there at the late night folk club) and gone straight for a scheduled slot at the Club Tent. The moderator mentioned Andy Cutting. To my untrained ears he sounded like John Spiers. It was a pity that the previous act overran his slot, thus cutting into Saul's time, but a solid gig all the same. 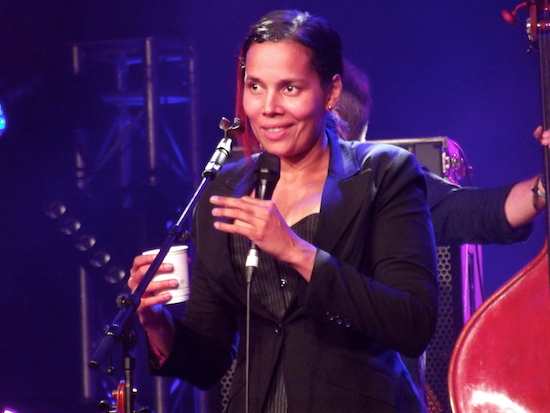